A tag, a slogan, and a rallying cry, "Youthquake" exemplifies the slickness as well as the conviction, the spontaneous ebullience as well as the commercial aggression that during the 1960s marked the triumph of London ready-to-wear. Powered by the momentum of a cresting youth culture, a cadre of British designers, mostly women, wrenched dominance away from the Paris couture houses and profoundly altered global fashion.

Youthquake fashion cannot be explored or under-stood without acknowledging its social and political context. In Fifty Years of Fashion, Valerie Steele notes that the "narrow, apolitical approach," preferred by many fashion journalists "becomes insupportable when dealing with the 1960s" (p. 49). These clothes garbed armies of protagonists in the ongoing narrative of women's economic, sexual, and social independence, and the consequent and reciprocal expansion of men's personas. In 1988, Mary Quant recalled: "Women had been building to this for a long time, but before the pill there couldn't be a true emancipation. It's very clear in the look, in the exuberance of the time-a rather childlike exuberance. "Wow-look at me!-isn't it lovely? At last, at last!'" (Conversation with author, December, 1988).

Youthquake fashion was also a lever as well as a product of the increased social mobility engendered by the postwar Labor governments of Britain. Due to governmentsubsidized tuition, an unprecedented number of students of humble origin were now able to pursue careers in the fine and commercial arts. At the Royal College of Art, Madge Garland, formerly editor in chief of British Vogue, had developed a graduate program in fashion design. Professor Janey Ironside became the program's principal in 1956. "We were trained to see, to explore, to enjoy ourselves," recalled RCA alumna Sally Tuffin, one half of celebrated Youthquake design team (Marion) Foale and Tuffin. "We felt as though we could go off and do anything, without restriction." (Conversation with author, November, 1988).

Throughout the 1950s, British fashion was dominated by the Paris couture, and the long shadow it cast over London couturiers such as Norman Hartnell and Hardy Amies. British manufacturers followed the parameters laid out by the high end of fashion. But the emerging generation wanted something entirely different and entirely their own. They were out of sympathy with the mores of expensive made-to-order clothing. "The couture was for kept women," said Barbara Hulanicki, who opened the London boutique Biba after working as a fashion illustrator in the late 1950s and early '60s. As she sketched the couture for London newspapers, Hulanicki objected as well to "the snobbery that was designed to make everyone feel inferior." (Conversation with author, November, 1988)

Youthquake fashion found its own staging ground as the boutique replaced the couture salon as fashion incubator. The Youthquake boutique was somewhere between a neighborhood dressmaker's atelier and the auxiliary shops maintained within some Paris couture strongholds, in which accessories and related bagatelles might be sold. Youthquake fashion could be said to have begun in November 1955, when Quant, recently graduated from art college, opened her boutique "Bazaar" in the London district of Chelsea. A year later she started designing because she couldn't find the type of clothes she wanted to stock her store.

"What was wrong at that stage was that fashion only came through one route," Quant recalled, "which designed for a way of life which was very much that of a minority."…She instead would design for "women who had a job and a fantasy life that took that job into account" (conversation with author, December 1988). The daughter of schoolteachers, Quant was married to Alexander Plunkett Greene, scion of an aristocratic lineage. Their marriage became emblematic of falling class barriers. 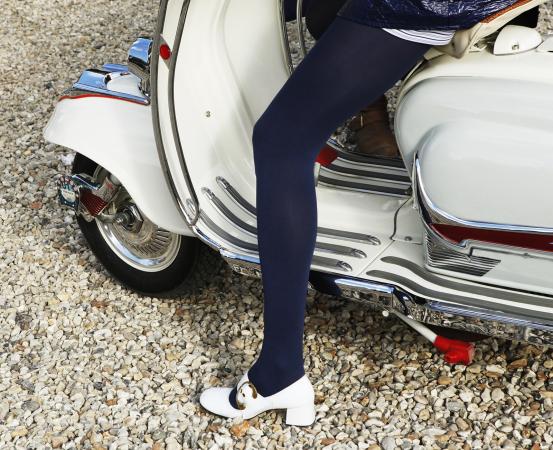 Chelsea had long been a magnet for London artists and bohemians, and during the 1950s it was a haunt for the city's Beatnik culture. Quant paid tribute to their minimal and monochromatic uniforms. As the couture never could, Quant and her brethren acknowledged, even asserted defiantly, that a primary design inspiration was the clothes of the young wandering the streets outside their workrooms. Quant was enamored, too, of the look of tap dancing students she'd watched as a child, as they practiced wearing short skirts, black tights, and patent-leather shoes. She kept on raising hemlines, and eventually Quant became known as "Mother of the Miniskirt." Some accounts have her showing skirts above the knee by 1958, although Quant's claims to precedence were challenged by Paris couturier André Courrèges. But who was first, or if there indeed was a first, is of peripheral importance. As far back as the late 1920s, hemlines were almost above the knee, and it was inevitable that after the long skirts of the late 1940s, they would rise again. As well, the inexorable shifts in society provided a historical imperative. In 1968, British fashion historian James Laver described the miniskirt as "the final word in the emancipation of women-in proving her economic independence…Long, hampering skirts were fetters to keep a woman at home. The very short ones scream: 'I am stepping out'" (WWD March 22, 1968, p.8).

Eventually, there were three Bazaars in London. They survived until 1968, by which time Quant was presiding over a vast wholesale and licensing empire. Bazaar was a catalyst in King's Road's transformation into a streaming, coursing artery of fashion and display. Kiki Byrne, who had worked as Quant's assistant, also opened a celebrated boutique there, where Hulanicki was enthralled by Byrne's "wonderful black dresses … shifts that weren't over-designed" (conversation with author, November 1988). Her generation wanted something much looser both philosophically and structurally even than the unfitted shape that was being shown in the Paris couture as the 1950s progressed. The Youthquake silhouette was less determined, less sculptural, less constructed, and usually less decorated. "Our clothes had to be comfortable," Tuffin recalled. "That was the main requirement" (conversation with author, November 1988).

While the Paris couture continued to take itself very seriously, the kingdom of Youthquake teemed with humor and irreverence. Quant gave droll names to her clothes and arranged gag tableau in her store windows. Foale and Tuffin put Y's across the front of shift dresses- "Y-fronts" were men's underwear briefs.

Where pants for women were concerned, London was more adventurous than the Paris couture or even the "ye-yes," the young ready to wear designers of Paris. The Foale and Tuffin trouser suit became a global prototype-"The cut was incredible," Betsey Johnson recalled, "the best I've ever seen" (conversation with author, August, 1987). They were strongly advocating trousers well before Courrèges's pants-dominated couture collections of the mid-1960s. Yet in 1961, when they first began teaming pants instead of skirts with jackets, the combination seemed so incongruous that "we actually fell about laughing," Tuffin recalled. Lines were straight, shoulders natural, the jacket semi-fitted like riding attire, but devoid of constructed reinforcement. The trouser suit was one of Youthquake fashion's most controversial provocations, but also one of its most enduring legacies.

Youthquake fashion at its most egalitarian and inclusive was represented by London's Biba boutique, which Hulanicki opened with her husband Stephen Fitz-Simon in 1964. "We practically gave our things away to the public," Hulanicki claimed. Biba practiced a rapid response to the trends of the street, alternately spurring and parrying the restless experimentation of the young. "I couldn't stand wholesale," Hulanicki said, "because it's just between you and the buyer, and the buyers are always wrong, anyway. They want what sold last year, but we were working right on the moment, all the time" (conversation with author, November 1988). Biba kept moving to larger and large quarters, its decor an iconoclastic mise-en-scène of oddments and antiques. With Biba, the Youthquake boutique reached its apogee as destination, event, parade ground, and crossroads.

Although at Biba the use of inexpensive synthetics was dictated by the need to keep prices down, synthetics were also championed by Youthquake fashion for reasons other than necessity. Rather then simply a pallid imitation of natural fibers, they could manifest novel textures and appearances. Machine-tooled fabrics were celebrated as a threshold to a utopia of increased leisure and lessened drudgery. Quant extolled their ability to look "like a delicious soufflé that happened with a pure kind of joy- without anybody's tears on them" (conversation with author, December 1988). 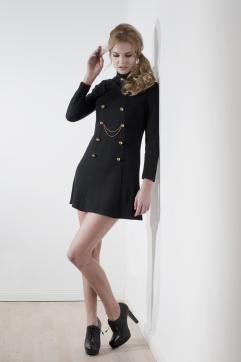 Youthquake designers were certainly gratified by the boggled attention their work received by mainstream manufacturers, journalists, and even the couture itself. But they were primarily concerned with designing for themselves and their contemporaries, and because of the exploding youth market, were able to do so without compromise. Certainly mature women could legitimately complain that the ubiquitous narrow armholes of the Youthquake silhouette were not easy to fit into. Women who'd been brought up on the postwar British rations were not robust. Hulanicki noted that the average women's shoe size during the 1960s was 3 1/2 or 4, while twenty years later it had jumped two sizes. The somewhat androgynous silhouette privileged by Youthquake fashion was also an aesthetic and sexual statement, however, a rejection of the overblown ideal of hourglass femininity that been promulgated during the 1950s by the couture and, perhaps more oppressively, by the imagery of popular culture.

Women's reassessment of gender-specific clothes and behavior, unleashed from men a rejection of the dour clothes that had been obligatory since the Regency epoch of the nineteenth century. Young working-class men of the late 1950s organized themselves into coteries-The Teddy Boys, The Mods, the Rockers-each with its own odd and distinctive uniform. Around this time, Scottish-born retailer John Stephens began to transform London's Carnaby Street into a chockablock concentration of stores inviting men to cast off the fetters of old. Once all but completely polarized, men's and women's clothes could now converge into unisex outfits designed to be worn by either sex. A colony of men's and unisex boutiques sprung up around London, allowing men a selection unlike anything previously imaginable.

Biba's enveloping of new world fashions in the warm patina of vintage furnishings could be seen to anticipate the historical bent of late '60s London fashion. The city's archival closets were turned inside out and its streets became a fantastic masquerade. The rage for antique clothing, as well as the folklore and psychedelic panoply of the hippies dominated this second phase of Youthquake. The hippies' sartorial revolution evolved from the fashions of the Beats and the British ready-to-wear sisterhood; its founding mothers smoothly negotiated this second phase of Youthquake. The late '60s also saw the rise of designers like Ossie Clark and Zandra Rhodes, whose gossamer and fanciful creations recalled the romanticism of Arts and Crafts dress of the previous century. Vanguard London fashion of the late '60s was more anarchic than earlier in the decade. The laissez-faire of the hippies necessitated less homogeneous internal consistency to broadcast its sartorial and cultural message.

The End of an Era

By the mid-1970s, however, the very moniker Youthquake was superannuated. Many of the movers and shakers were in states of decompression or stately retreat. Quant was by now concentrating entirely on licensing. Foale and Tuffin disbanded. After Hulanicki and Fitz-Simon's alliance with outside capital, Biba suffered a bitter demise not long after reaching its apotheosis taking over a huge Art Deco department store. On the other hand, designers like Rhodes thrived amid a London fashion environment that continued to appreciate the eccentric. Conversely, the more muted and classic designs of Youthquake's Jean Muir became more popular than ever.

The plucky young firebrands of Youthquake had succeeded in radically upending global fashion markets. London itself has never returned to the fashion backwaters it was in the 1950s. The social and economic leveling proclaimed by Youthquake's habits and habiliments were not defeated by reactionary political developments during Britain in the 1980s. The Youthquake movement will always be an inspiration to those who seek to democratize fashion and tap the creative vitality of youth.