The title "fashion editor" evokes images of fashionable women, those arbiters of style and taste, who pronounce and decree what's new and what's next. They've appeared on stage and screen-from the indecisive Liza Elliot of Lady in the Dark ("the circus cover or the Easter cover?") to the very decisive Maggie Prescott of Funny Face ("Think pink!").

With the advent of the fashion magazine, the fashion editor emerged as the tastemaker in the early twentieth century. The first and most enduring of these women was Edna Woolman Chase of Conde Nast's Vogue, who rose from assistant in the circulation department in 1895, three years after Vogue was founded, to editor in chief in 1914. She remained in that venerable position until retirement in 1952. Through the 1940s and 1950s, the most visible of her fashion editors was the tasteful and talented Bettina Ballard. An earlier colleague, Carmel White (later Snow) had left Vogue to head Hearst's Harper's Bazaar. Her longtime fashion editor was a flamboyant eccentric (her outrageous column Why Don't You …? was notorious) named Diana Vreeland, who in 1963 was tapped by Conde Nast's new owners to become editor in chief of their flagship, Vogue. 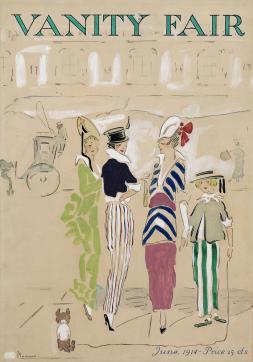 Reflecting Their Own Worlds

These grandes dames of fashion publishing were there at the creation. At first they filled their pages with news of what fashionable and wealthy women were wearing and doing. Actually, they were covering and reflecting their own worlds, as each had come from, or married into, families of wealth and society; and most of their staffers served in their low-paying but prestigious jobs as stop-offs between finishing school and marriage. Coverage of the Paris couture, the wellspring of fashion, and of the emerging American designers established these two magazines as the ultimate authorities-the innovators of fashion and fantasy.

By the mid-1950s, a new breed of editor was being sought. The competition coming from the newer, younger fashion magazines devoted to the emerging working woman, the post-war suburbanite, and the "youth market" of the sixties, brought into the editors' chairs a more pragmatic, reality-based editor. Vogue had tapped its merchandizing editor, Jessica Daves, to succeed Mrs. Chase. Diana Vreeland followed as editor in chief, after being passed over at Bazaar. Those qualities ultimately did her in at Vogue, when she was replaced by her assistant, Grace Mirabella, a down-to-earth market-trained fashion editor. Mrs. Snow's niece, Nancy White, who'd been editor at Hearst's service magazine, Good Housekeeping, followed her at Bazaar.

Of the booming "younger" books, Mademoiselle, edited first by Betsy Blackwell, then Edie Raymond Locke, was the first to "merchandise" each fashion shown, informing the reader of its price and where to buy it. Charm, Glamour, and Mademoiselle mounted promotions with editors making appearances in retail stores, as the link between the editorial and advertising departments grew stronger. A fashion editor, covering her assigned market, learned to dutifully cover the advertisers' "lines." She even collaborated with designers and manufacturers, developing ideas for new looks for her readers.

Fashion was beginning to reverse itself-starting on the streets and then inspiring designers-so it was important to keep an eye on a magazine's younger staff and the streets of New York, Paris, Milan, and Saint-Tropez to spot the trends. Paris couture (made-to-order for private customers) no longer dominated; ready-to-wear (prêt-a-porter), started in 1969 in Paris and later in Milan, was manufactured for and sold directly to American and European retailers. These collections became the trendsetters. American fashion editors sat side by side with store executives in the front rows of the overcrowded showings, their photographers jockeying for position along the runways, shooting the photos for the next issue, while space was being held until the last minute before deadline.

The fashion editor's job was to report the news, making choices from the season's offerings, whether from Europe or America; to play a major role in the selection of the photographers and models for each "portfolio," or series of pages; and often to oversee the "sitting" in the studio or the "shoot" on location. High-profile "stars" were Polly Mellen of Vogue and Carrie Donovan of the New York Times.

Editors of the New Media

New media brought new opportunities, and in the 1980s Elsa Klensch, a former Vogue and Harper's Bazaar fashion editor, convinced CNN that women the world over would be eager to view the designers' collections within weeks of their showings. Her viewers numbered in the millions, but CNN canceled Style in 2000. Successors include Full Frontal Fashion and cover not just the collections but the "fashionistas" and front-row celebrities attending.

The technology of the information age has made all things possible on demand. Fashion editors can now view the collections online (not the same as being there in the tents of New York, Milan, London, and Paris); they over-see the selections for their own magazine's popular Web sites, such as Vogue's Style.com. 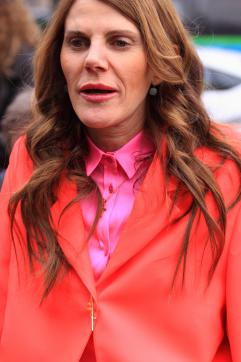 Communicating with and serving the reader are duties of today's fashion editors, who have a whole new world of titles such as "fashion news editor," "fashion market editor," "editor-at-large," "stylist," and more. Many appear regularly on TV "what's in" and "how to" segments. They still watch the streets, but mostly they watch the New York and Los Angeles clubs, music videos, and the red carpets to spot the trends. Perhaps the first star of the 2000s is Anna Wintour of Vogue, who, in the tradition of earlier grandes dames, pronounces and decrees what's new and what's next.

Mirabella, Grace, and Judith Warner. In and Out of Vogue. New York: Doubleday, 1995.