Fashion magazines are an essential component of the fashion industry. They are the medium that conveys and promotes the design's vision to the eventual purchaser. Balancing the priorities has led to the diversity of the modern periodical market.

Fashion, except in its lifestyle sense or as a byword for vanity, played no part in early periodical literature. In 1678, however, Donneau de Visé first included an illustrated description of French fashions with suppliers' names in his ladies magazine, Le Mercure galant, which is considered the direct ancestor of modern fashion reports. Thereafter, fashion news rarely reappeared in periodical literature until the mid-eighteenth century when it was included in the popular ladies handbooks and diaries. Apparently in response to readers' requests, such coverage to the popular Lady's Magazine (1770-1832) was added to the genteel poems, music, and fiction that other journals were already offering to their middle-class readers.

By the end of the eighteenth century, Lady's Magazine had been joined by many periodicals catering to an affluent aspirational society. Interest in fashion was widespread and it was included in quality general readership journals such as the Frankfurt Journal der Luxus und der Moden (1786-1827) and Ackermann's Repository of the Arts, Literature, Commerce, Fashion and Politics (1809-1828) as well as those specifically for ladies. Despite the continental wars, French style was paramount and found their way into most English journals. Very popular with dressmakers was Townsend's Quarterly (later Monthly) Selection of Parisian Costumes (1825-1888), beautifully produced unattributed illustrations with minimal comment. The journals were generally elite productions, well illustrated and highly priced, though cheaper if uncolored. John Bell's La belle assembléé (1806-1821) was edited by Mary Anne Bell between 1810 and 1820, also proprietor of a fashion establishment. Dressmaker's credits are rare, perhaps because fashion establishments were dependent on personal recommendation and exclusivity.

By the middle of the nineteenth century, the magazine, like other popular literature, profited from improvements in printing methods, lower paper costs, and lower taxation. Literacy levels had risen and readership increased. Many new titles were produced and fashion for all types and ages were generally included in those for the women's market. Circulation figures were high; Godey's Lady's Book (1830-1897) issued 150,000 copies in 1861 and Samuel Beeton's The Englishwoman's Domestic Magazine (1852-1897) issued 60,000. Advertisement increased but the revenue rarely inhibited editorial independence. The key to circulation was innovation, and Godey and Beeton both added a shopping service and additional paper patterns to those already available within the magazine. Up-to-date fashion news was an essential and fashion plates as well as embroidery designs came direct from Paris sources, though in America they were often modified for home consumption.

The wide-ranging informative articles, typical of the "new journalism" were often written by women beginning to be well established in the newspaper profession. By the end of the century, there had been women editors at Godey, the Demorest publications, 1860-1899, The Queen (c. 1860s) and Myra's Journal of Dress and Fashion (1875-1912).

Entertaining and practical guides for the average family, this type of mid-market magazine had a long life, only recently losing its popularity. Its main competitors were shop catalogs and store magazines. 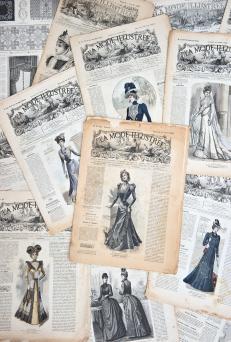 Through its Chambre Syndicale, the couture was organizing its own fashion journal, Les modes (1901-1937). Its innovative and informative photographic illustrations made it an anthology of high status Paris design by the end of the century. In 1911 Lucien Vogel offered the couture an even more modern shop window in the elitist Gazette du bon ton (1911-1923), the precursor of the small pochoir (stencil) illustrated fashionable journals characteristic of the avant-garde press of the early twentieth century.

It is a tribute to their vision that a men's style publication was included. Monsieur (1920-1922) was a complete break with the stereotyped format and trade jargon of the tailoring journals. It was not followed until Esquire (1933- ), described as the male counterpart to Vogue and Harper's Bazaar, updated the male fashion image, stressing a harmony between clothes and lifestyle.

High fashion was reinterpreted for the American market when Vogue was taken over by Condé Nast Publications in 1909. His publishing experience had shown that a rich and aspirational American society wanted practical fashion guidance and a direct line to Paris. Vogue coverage is global in the early 2000s, and foreign editions make their own assessments of the fashionable and the salable. Until his death in 1942, Condé Nast maintained meticulous control of the quality and service he believed were owed to his readers. Vogue archives provide insight into the management of quality fashion publication in a twentieth-century world. The contributors, editors, designers, photographers, and artists who have enriched the Vogue pages over the years add another essential layer of information.

Industry Growth in the 20th Century 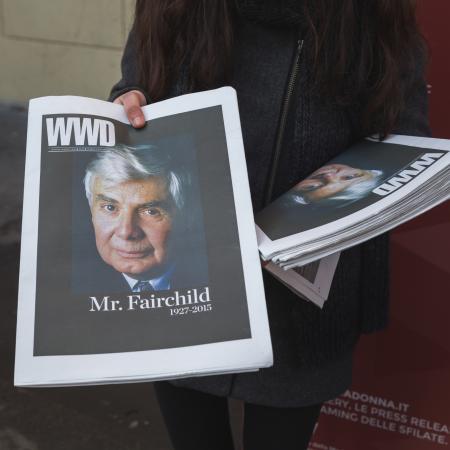 As fashion pace increased, the fashion publication scene was stimulated by developments at Women's Wear Daily (WWD), after the Fairchild family purchased it in 1909 as a conventional trade paper for the garment trade. Its offshoot, W (1972- ) was developed by John Fairchild, the son of the founder, to have "the speed of a newspaper … with the smart look of a fashion magazine" and significantly, its survival depended on advertisement. News "scoops" were competed for ruthlessly. Vogue secured the designs for Princess Elizabeth's wedding dress in 1947, WWD obtained Princess Margaret's in 1960, plus the annual Best-Dressed List. Assessment of style change was more problematic and it was the role of the fashion editor to balance designer's contribution and public acceptance. It was a tribute to both when magazines and public supported Dior's New Look in 1947, despite trade and government opposition.

Increasingly dependent on advertising, the conventional magazine is challenged if fashion deviates from established trends. The "lead in" time for a quality, full-color journal is generally two months-too long for the speed of street fashion and its high-spending, young, and trendy clientele. This readership was not targeted until 1976 when Terry Jones, originally from Vogue, developed the U.K. magazine i-D, with its apparently spontaneous fanzine look. Its original message, "It isn't what you wear but how you wear it," had little appeal for the clothing trade but it has found its niche market in the early 2000s and is the prototype "young fashion" magazine.

Despite the number of fashion magazines currently available, it is probable that most people appreciate fashion through the daily press, the popular lifestyle and celebrity magazines, television, and the Web. With advertising pressures and the sheer volume of clothing choices in an affluent society, it is not unexpected that these popular magazines react by judging celebrities not by their designer clothes, but by the way that they wear them.