The fashion show has evolved from an exclusive in-house presentation of haute couture held for a private clientele, to a biannual spectacle of both couture and ready-to-wear clothing that is seen by a vast cross-section of consumers, the mass media, and the fashion industry. A number of cultural and social forces are responsible for this evolution, including the increased consumer awareness of Parisian couture, the rise of the ready-to-wear industry after World War II, the growth of the modeling profession, and the increasing attention paid to the runway by the popular press. While the fashion show today is different from its early-twentieth-century incarnation, it does retain links to its origins in theatrical display and the couture salon shows of that period. 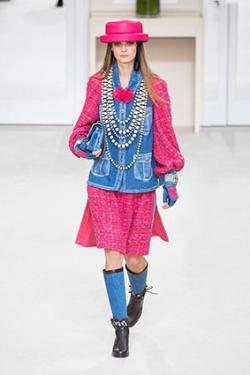 In nineteenth-century Paris, it was common practice for dressmaker houses to use their assistants or saleswomen (desmoiselles du magasin) to wear the designer's creations while working at the shop. To reach a broader clientele, many couturiers extended this display to the public arena as well, with figures such as Charles Frederick Worth dressing his wife in the latest styles to promenade in socially important areas of the city such as the Bois du Boulogne. In the late nineteenth and early twentieth centuries in London and Paris, the custom-dressmaking trade also maintained important and effective links to the world of theater and advertised its wares by dressing famous actresses both on and off the stage. The couture houses of Doucet and Paquin, for example, were very successful promoters through this medium and their clientele included such popular stars as Sarah Bernhardt, Réjane, and Cecile Sorel. The theater, particularly in France and England, became a place to see the most avant-garde styles and eventually a "fashion play" genre developed that revolved around the presentation of the latest couture creations. Dressing members of the fashionable demimonde and house mannequins (the term for models in this period) for the races, opera, and theater premieres, and resort areas were another means of advertising up-to-the-minute designs.

In the first decade of the century, social display was supplemented by organized shows at a fixed time in the couture house. Although a number of designers and fashion personalities claim responsibility for the first fashion show, it was not one person who started the trend, but rather a gradual evolution toward more formal presentations of seasonal clothing lines. By the mid-1910s many designers, including Paul Poiret, Lucile, and Paquin, were using the fashion show as a promotional vehicle. In 1910 Lucile promoted the opening of her New York branch with a spectacular fashion show in a city theater. The presentation had an Arabian Nights theme inspired by vaudeville revues. Lucile was one of the first to promote her mannequins as public personalities, giving them exotic names such as Dinarzade and Sumurun, and training them to walk with a distinctive gait.

For Paris haute couture, the shows were first presented in Paris or London and then sometimes traveled to America on well-publicized tours. Paul Poiret followed this pattern, organizing a tour in 1911 in which he and his mannequins showed his exotic creations in venues such as charity bazaars, theaters, and department stores throughout Europe. In 1913 he also conducted a heavily promoted tour of the United States with his mannequins, and other designers followed suit, including Jeanne Paquin in 1914 and Jean Patou in 1924. Another innovative mode of presentation in the 1910s was the organization of a thé dansant, a popular pastime that showcased new dances such as the tango and the fox-trot. Designers including Lucile and Paquin showed their new designs in such a context, often using theaters as a show venue. 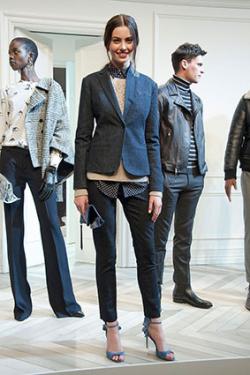 In America, department stores, such as Wanamakers in Philadelphia, started holding regular fashion shows in 1910 and gradually broadened the audience for such fashion display. The advent of the fashion newsreel in the same period also served to bring the fashion show to a wider clothes-buying public. Beginning in 1910, a number of French, English, and American film companies began to show fashion reels as part of their weekly newsreel production. In 1913 a New York-based film company started documenting the biannual fashion shows in New York that now took place in February for the spring- summer collections and July for fall-winter collections. At this point, modeling was not an evolved routine and both film and fashion magazines often used actresses, opera singers, and dancers as mannequins.

In the United States during World War I, a number of fashion shows were organized to benefit the war effort and toured across the country. In 1914, a Fashion Fête was organized by Edna Woolman Chase, the editor of Vogue, to showcase New York designers. Also in that year a number of couture houses banded together to form Le Syndicat de defense de la grand couture francaise with Paul Poiret as president. In an effort to fight design piracy, the organization charged a standard copyright fee for business customers who wished to reproduce couture designs. The syndicate also placed more stringent rules on who could attend the couture shows and wholesalers and retailers were barred from couture showings unless they were invited.

By 1918 the couture industry had fixed dates for two major shows per year for the foreign buyers that were coming to Paris. The shows were becoming organized presentations using in-house mannequins and by the 1920s, the House of Patou, for example, was employing 32 mannequins to model 450 dresses at each showing. Other contemporary references document between 7 and 15 mannequins regularly employed in the couture houses at this time. One 1920s commentator wrote that the mannequins were still considered "demimondaine" but they did have paid salaries, bonuses, and some had season contracts. In 1923 John Robert Powers established the first modeling agency in New York, which served to professionalize the industry and positioned modeling as a more socially acceptable career. In the 1920s designers also had a set routine and started by showing sports and day clothes, then evening wear.

In the 1930s Elsa Schiaparelli was the first to create themed collections, including "Circus," "Commedia dell'Arte," and "Astrology," among others. These themes added a theatrical flair to her shows between 1936 and 1939 by incorporating music, special lighting, and dance into the presentation. Her 1938 "Circus" collection, for example, included circus performers who jumped, skipped, and flipped all over the couture house. 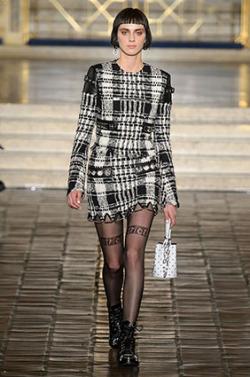 An increasingly formal presentation style marked the postwar era and at this point the show evolved into the essential organization that is still associated with it in the early 2000s. The show took place in the couture salon, the crowded audience consisted of invited buyers with important journalists at the front, and there was a specific sequence for the type of dress shown (for example, the wedding dress at the end). Fashion shows often lasted seventy-five minutes and approximately sixty ensembles were presented on between eight and ten models. This period also witnessed the association of particular mannequins with specific couture houses. Mannequins, such as Bettina at Jacques Fath or Praline at Pierre Balmain, with their distinctive saunters, visually represented the designer's philosophy and often acted as the designer's muse. While Paris had successfully reestablished itself as the style leader in the postwar era, countries such as the United States, England, and Italy also held regular fashion shows.

It was still common practice to hold fashion shows in department stores and hotels and the Vogue editor Edna Woolman Chase recorded in her 1954 memoirs:

"Now that fashion shows have become a way of life, now that a lady is hard put to it to lunch, or sip a cocktail, in any smart hotel or store from New York to Dallas to San Francisco without having lissome young things in the most recent models, swaying down a runway six inches above her nose-it is difficult to visualize that dark age when fashion shows did not exist. (Chase and Chase 1954, p. 119) "

By the mid-1950s, fashion shows were common in urban centers in semiannual department store displays and, at the local level, they were often incorporated into charity events.

In the late 1950s the rise of the ready-to-wear market had a significant impact on the organization, number, and scale of fashion shows. In 1959 Pierre Cardin showed his ready-to-wear collection in the Printemps department store in Paris and by the mid-1960s, ready-to-wear was regularly included in the fashion calendar. The growth of the ready-to-wear market was also related to the decline in interest in haute couture by the younger generation, who did not want to follow the fashion dictates of Paris. New designers responded to this cultural phenomenon by adding a youthful energy to their fashion shows. The English designer Mary Quant, for example, presented her mod ready-to-wear designs to jazz music and her mannequins skipped and danced down the runway. Quant opted to use print models rather than runway models because she liked the way they moved and the fast pace allowed her to show forty garments in fourteen minutes. The distinction between the runway and photography model was on the wane.

This growth of the ready-to-wear market eventually changed the function of the haute couture fashion show, shifting its targeted audience from private clientele to one consisting mainly of press and buyers. The 1960s also mark the beginnings of the use of the fashion show as a marketing tool to promote the licensed products associated with the house. 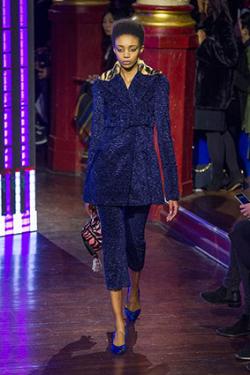 In the 1970s and 1980s the public visibility and magnitude of fashion shows increased dramatically. In 1973 the designer Kenzo presented a large-scale ready-to-wear show on a stage rather than a runway, indicating a break with haute couture tradition and the increasing emphasis on spectacle. In the 1980s Thierry Mugler and Claude Montana staged theatrical events that further removed the fashion show from the couture salon. Mugler hired a rock impresario to stage his fashion show, an audience of six thousand people attended, and half of the show's tickets were available for purchase by the public. This was the first time that the public was allowed to attend a couture show and marks a trend toward the fashion show as mass entertainment. In the mid-1980s the regular broadcasting of the ready-to-wear shows on cable television further broadened the viewing public. The increased public awareness of the catwalk shows led to the promotion of "supermodels" in the early 1990s. By this time, modeling had long been a socially acceptable profession and the increasing cult of personality in various cultural arenas served to promote models as celebrities on a par with movie actors.

While the majority of fashion designers hold traditional runway shows during the fashion weeks in Paris, London, New York, and other cities, many now have specific themes, mood music, and special lighting and other effects. In the 1990s there were a number of designers, including John Galliano and Alexander McQueen, who became renowned for producing extravagant shows in unusual spaces with narratives and fictional characters. These theatrical stagings have pushed the fashion show beyond the garment and into the realm of the conceptual fantasy. These types of shows function primarily to promote brand recognition and to sell the ready-to-wear lines and the licensed products.