In a certain sense, the Western economy has been "global" since the sixteenth century. After all, the African slave trade, colonialism, and the intercontinental trade in sugar and coffee made capitalism possible. But since the early 1980s, transnational corporations, cyber technology, and electronic mass media have spawned a web of tightly linked networks that cover the globe. Taken together, these forces have profoundly restructured the world economy, global culture, and individual daily lives. Nowhere are these changes more dramatic than in the ways dress and fashion are produced, marketed, sold, bought, worn, and thrown away.

For consumers in dominant Western countries, globalization means an abundance of fashions sold by giant retailers who can update inventory, make transnational trade deals, and coordinate worldwide distribution of goods at the click of a computer. It means that what people are consuming is less the clothing itself than the corporate brand or logo such as Nike, Victoria's Secret, or Abercrombie & Fitch. Consumers are purchasing the fantasy images of sexual power, athleticism, cool attitude, or carefree joy these brands disseminate in lavish, ubiquitous, hyper-visible marketing on high-tech electronic media. But much less visible is the effect of globalization on the production of fashion.

As fashion images in magazines, music videos, films, the Internet and television speed their way around the world, they create a "global style" (Kaiser 1999) across borders and cultures. Blue jeans, T-shirts, athletic shoes and baseball caps adorn bodies everywhere from Manhattan to villages in Africa. Asian, African and Western fashion systems borrow style and textile elements from each other. Large shopping malls in wealthy countries house all these styles under one roof. Like high-tech global bazaars, they cater to consumers of every age, gender, ethnicity, profession, and subculture.

According to Susan Kaiser, "This tendency toward both increased variety within geographic locations and a homogenizing effect across locations represents a global paradox" (Kaiser 1999, p. 110). On the one hand, shopping malls in every city have the same stores, and sell the same fashion items. Yet if we take the example of jeans, we find a seemingly infinite and often baffling array of cuts and fits: from stretched tight to billowing baggy, from at-the-waist to almost-below-the-hip; from bell-bottom to tapered at the ankle; from long enough to wear with stiletto heels to cropped below the calf. While a somewhat baggy, "relaxed" cut can signify dignified middle-aged femininity, a baggy cut taken to excess can signify hyper-masculine ghetto street smarts. Each variation takes its turn as an ephemeral and arbitrary signifier of shifting identities based on age, gender, ethnicity, or subculture.

While marketing campaigns encourage us to associate fashion consumption with pleasure, power, personal creativity, and individual fulfillment, business economists and corporate finance officers have a different view. Contrary to fashion magazines, business organs like The Wall Street Journal anxiously watch over consumer behavior as minutely measured by the Consumer Confidence Index managed at the University of Michigan (Weiss 2003). In this view, consumption is neither personal nor individual, but necessary for upholding a vast, intricate global capitalist economy. Dependent on massive fashion consumption in the wealthier countries, this economy depends equally on massive amounts of cheap labor in poorer countries. 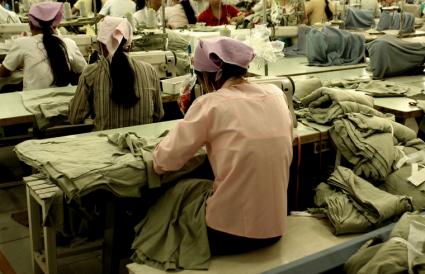 No longer manufactured by the company whose label it bears, clothing from large retailers is manufactured through a network of contractors and subcontractors. Pioneered by Nike, the largest retailer of athletic shoes and fashions, the outsourcing or subcontracting system was quickly taken up by giant retail chains like Express and The Gap, and big-box stores such as Wal-Mart. These companies do not manufacture their own goods, but rather source and marketing goods produced on contract in low-wage environments. Because they make large profits, they can force manufacturers to contract with them at lower and lower prices. To reduce their costs, manufacturers subcontract much of the sewing, and even the cutting, to sweatshops in countries such as Mexico, China, Thailand, Romania, and Vietnam, where poverty is high and wages can be as low as 23 cents per hour. Manufacturers can also subcontract to sweatshops in the vast underground economies of immigrant communities in cities like Los Angeles, New York, or London. There is a huge contrast, but a tight relation, between production in sweatshops, where young women workers are often subjected to physical and sexual abuse, and consumption in retail chains filled with glamorous images. Jobs come without even the most basic worker safeguards and benefits.

Since retailers can lower their prices to consumers by lowering their labor costs, consumers have unwittingly participated in intensifying a system of competition among manufacturers that drives wages and working conditions downward. According to the World Bank, one of the most powerful institutions of globalization, "the competitive intensity of the U.S. retailing industry has increased significantly" (Biggs et al., p. 1). As a consequence, it says, "new emerging retail strategies" include "the drive to offer more value-oriented, low-priced goods to their customers, utilizing a global sourcing network that increasingly favors low wage, quota free countries," and the "liberalization of labor regulations" (Biggs, p. 2). This "liberalization" means relaxing worker protections for health and safety, lowering and also enforcing less stringently the minimum wage, and prohibiting workers from organizing for better wages and working conditions.

By contrast to the World Bank's optimism about globalization, in 1998, the California Labor Commissioner said: "Global competition results in a feeding frenzy in which local producers compete against one another and against foreign factories in a brutal race to the bottom" (Rabine, p. 118). Referring to one among countless examples of production on the global assembly line, he was speaking on the occasion of the closure of a garment factory in Los Angeles that owed its workers $200,000 in unpaid wages. To meet a contract for T-shirts from the Disney Corporation, it had to reduce its profit margin and keep accelerating its production schedule in a downward spiral to closure.

One effect of globalization is increased immigration from third-world countries to all the countries of the world. Immigrants to the United States provide a labor pool for local versions of third-world sweatshops. In 1997, Southern California came to lead the nation in garment production. By 1999, hourly wages for garment workers in Los Angeles had dropped below minimum wage of $5.75 to as little as $3.00. Often workers were not paid at all. The California Labor Commissioner estimated in 1999, right before a new anti-sweat-shop law was passed, that the industry accumulated $72,620,000 in unpaid wages to mostly immigrant garment workers.

Responses to the Global Assembly Line 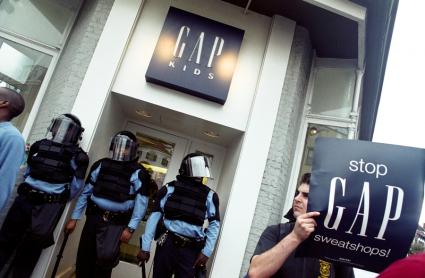 Protesting of Gap's use of sweatshops in 2002

Until 1997, CEOs of the giant retailers, such as Philip Knight of Nike, claimed that they had no responsibility for the working conditions in the sweatshops because the owners were independent contractors. But by this time consumer groups, religious groups, and student groups, including the National Labor Committee in New York, Global Exchange in San Francisco, the Los Angeles Jewish Commission on Sweatshops, the national organizations of United Students Against Sweatshops and Sweatshop Watch, as well as garment workers' unions like Unite, began campaigning for reforms. By bringing publicity to the practices of the giant retailers, these groups persuaded corporations to pledge themselves to accept fair labor standards and to have independent monitors in the factories that supply their fashions. These groups have also promoted legislation in California and New York that aims to hold the retailers responsible for the wages and working conditions of the workers who produce the products they sell.

While the global assembly line and mass consumption form the dominant circuits of globalized fashion, other, less visible circuits span the globe. These shadow networks concern fashion production and consumption in third-world countries. The global economy of high-tech, large-scale networks also works by exclusion. In third-world countries, globalization has resulted in the destabilizing and dismantling of official economies, massive unemployment, and the rise of informal or underground economies. As part of the restructuring and deregulation of global capital, the World Bank and International Monetary Fund have imposed on debtor nations in the third world Structural Adjustment Programs. These programs dismantled state economic controls on basic necessities and social programs for health, education, housing, and sanitation, in favor of free-market strategies, austerity programs, and privatization of basic utilities like electricity and water. These measures have resulted in a disintegration of formal institutions of the government and economy. Out of desperation, people have devised means of surviving in informal economic networks. In Africa and Latin America, this has had two effects on fashion.

One is that the numbers of artisanal producers, especially tailors, dyers, weavers, and jewelry makers, have increased dramatically. In an alternative global network, suitcase vendors sell to tourists, or they travel to diasporic communities in Europe and the United States, where they sell their fashions in people's homes, at ethnic festivals, or on the street. They also sell in the boutiques and on the Web sites of nonprofit organizations dedicated to helping third-word artisans.

A second effect concerns global networks of usedclothing dealers and consumers. Large wholesalers buy masses of used clothing from charity thrift shops such as Goodwill in the United States, Canada, and Europe. In giant warehouses, dealers sort the clothes, bail them, and send them by container to smaller wholesalers in countries of Asia, Africa, and Latin America. Small retailers then sell the clothes for affordable prices at open-air stalls in cities and tiny rural towns. Jeans, T-shirts, and athletic shoes thus become the most visible symbol of globalization in virtually every corner of the world.

Bonacich, Edna, and Richard Appelbaum. Behind the Label: Inequality in the Los Angeles Apparel Industry. Berkeley: University of California Press, 2000.