Horst Paul Albert Bohrmann (1906-1999) was one of the most creative and prolific fashion photographers of the twentieth century. (He took the name of Horst P. Horst during World War II and was known professionally simply as Horst.) From the beginning of his career in 1931 until 1992, when failing eyesight forced him to abandon his work, his photographs graced the pages of American, French, British, German, Spanish, and Italian editions of Vogue, Vanity Fair, House and Garden, and a host of photography magazines, books, and catalogs. Horst came to prominence in the 1930s, by which time the power unique to the medium of photography was dramatically apparent to promoters of fashion. He is appreciated in the twenty-first century not only for the spare elegance and refined glamour of his fashion work, which produced icons of the genre, but also for his myriad portraits, male and female nudes, flower studies, and pictures of homes and gardens. 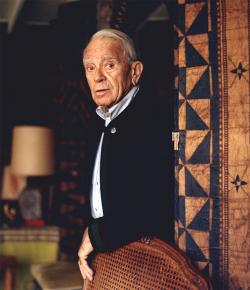 Horst Bohrmann was born in Weissenfels-an-der-Saale, Thuringia, in 1906, the second son of prosperous, middle-class, Protestant parents. The family suffered financial hardships as a result of World War I but eventually recovered in the 1920s, enabling Horst to attend the Hamburg School of Applied Art, where he studied furniture making and carpentry. Exposure to Bauhaus principles and personalities led him to seek an apprenticeship in Paris with Le Corbusier. However, Horst was disappointed both with the projects and the great architect himself and soon quit. Wandering about Paris in search of something more vital, he encountered the fashion photographer George Hoyningen-Huene, by then well-established at Condé Nast. Soon Horst was a familiar figure at the studio, helping his older friend arrange sets and lighting, as well as serving as a male model for some of Huene's most striking swimwear images, and even starring in a short film with Natasha Paley (now sadly lost).

In the spring of 1931 Horst was given a sudden chance to try his own hand at the métier. Dr. Mehemed Agha, American Vogue's celebrated art director, was then visiting Paris and thought Horst might have the required talents. Horst passed his initial tests, which required still lifes of accessories and jewelry, with flying colors, these first photographs being published in the November and December issues of Vogue. An invitation to work from American Vogue soon followed, but the engagement was short-lived: he was sent back to Europe for insubordination. When Hoyningen-Huene later left Paris for an assignment for Vanity Fair in Hollywood, Horst shouldered his work, and when his friend and mentor left Vogue for good in 1935, it was Horst who inherited the mantle as photographer-in-chief. Almost immediately, Condé Nast recalled him to New York, though he was allowed to continue to photograph the Paris collections each season. By 1937 he was firmly established in New York.

In 1942 Horst volunteered to serve in the United States Army, and despite being initially classed as an enemy alien, he was called up in July 1943 as a photographer. His assignments, however, remained on American soil. At war's end he was invited to the White House for a portrait commission of President Truman. 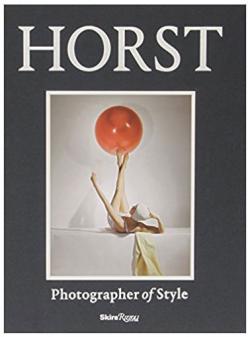 The postwar decades were filled with fashion and portrait assignments on both sides of the Atlantic, as well as trips to Mexico, Syria, Iran, and the new state of Israel. Moreover, he moved in the same circles as luminaries such as the film director Luchino Visconti, the artist Leonor Fini, Coco Chanel, Salvador Dali, Marlene Dietrich, Gertrude Stein, President and Mrs. Eisenhower, Gore Vidal, Yves St. Laurent, and Jacqueline Bouvier. He became close friends with a number of these people.

In 1952 Horst began to fall out of favor at Vogue, whose new editor, Jessica Davies, imposed rigid rules on the photographers. His fortunes were restored in 1962, however, when the much more supportive Diana Vreeland arrived to head the magazine. In 1971, on the latter's departure from Vogue, Horst gravitated to House and Garden, where he had occasionally worked beginning in 1947. He returned to Europe for an extensive cruise-wear assignment with French Vogue, which led to renewed work for the magazine.

From the early 1930s Horst exhibited both his professional and personal work, at first in European galleries, then more gradually in museums, most of which were hesitant to accept fashion photography as a legitimate domain of art. Significant group exhibitions include Fashion 1900-1939 at the Victoria and Albert Museum, London, 1975; Fashion Photography and Fleeting Gestures, at the International Center of Photography, New York, in 1977 and 1984, respectively; Lichtbildnisse: Das Porträt in der Fotografie, at the Rheinisches Landesmuseum in Bonn in 1982; and Das Akfoto, at the Fotomuseum in Munich in 1985. Major gallery exhibitions were held at the Galerie la Plume d'Or, Paris, in 1932; at the Germain Seligman Gallery, New York, in 1938; at the Sonnabend Gallery, New York, in 1974 and 1980; at Hamilton's Gallery, London, in 1986 and 1999; at the Staley-Wise Gallery, New York, in 1984; and at the Galerie Thierry, Paris, in 1999.

Most critics consider Horst's prewar fashion photographs, together with a select number of portraits from the same era, to be his finest work. His style, consistent across the various genres he explored, was characterized by a high degree of eclecticism. There are manifold references to art history, and he made liberal use of classical, baroque, and surrealist props and decor along with witty trompe l'oeil effects. Appreciative of historical precedents, he was as able to fabricate pictorial images in the style of Baron de Meyer as easily as he could cool modernist pictures in the style of Edward Steichen and Hoyningen-Huene. Horst's women subjects, in fashion studies or in portraits, project the power of their sex rather than the power of sex; they are bold, poised, and serene. Horst saw the body in architectonic terms, so that appendages of the body could be severed and reassembled to striking effect. Above all, he is known for his exquisite compositional sense, prompting an early admirer, Janet Flanner, to characterize his work as "a linear romance." His work influenced many younger photographers of fashion, portraiture, flowers, and the nude, including Robert Mapplethorpe, Bruce Weber, and Herb Ritts.