Irving Penn, who was born in 1917 in Plainfield, New Jersey, is considered one of the great American photographers of the mid-twentieth century, not solely one of its masters of fashion photography, in which he initially made his name. His reputation might equally have been secured by a command of portraiture and austere still life. In a career spanning six decades, he has had success too with botanical studies, the beauty photograph (most markedly for advertising purposes), ethnographical documents of cultural types, studies of voluptuous nudes, and with his book Dancer (2001), meditations on movement and the body. He disallows any of these disciplines from taking precedence in his oeuvre, but his name is inescapably synonymous with fashion photography. Since 1943 Penn's photographs have appeared regularly in Vogue, where his career was nurtured by Alexander Liberman, the magazine's art director from 1943 to 1962.

Penn studied at the Philadelphia Museum School of Industrial Art (1934-1938). Alexey Brodovitch, art director of Harper's Bazaar, whose design seminars Penn attended, introduced him to fashion magazines; moreover, he hired Penn to be his assistant during two summers. Brodovitch published some of Penn's illustrations in 1937. In the same year, Penn undertook a series of street photographs of the shop signs and facades of New York, where he was laying the groundwork for a career in the fashion world by working as a freelance graphic designer and consultant art director for Saks Fifth Avenue.

By 1942, having spent a year painting in Mexico, Penn recognized that his future lay elsewhere. In 1943 Liberman hired him as a creative assistant in the art department of Vogue. Penn found Vogue's photographers mostly ambivalent about his ideas for the magazine's cover artwork and instead put them into practice himself. His first Vogue cover, a still life composition of accessories, was published in October 1943. Over the next sixty years he photographed nearly 170 more. Shortly after his 1943 debut, he embarked on the photography of clothes. He followed this with a short-lived but inventive series, Portraits with Symbols, a stylish fusion of still life and portraiture in which well-known figures posed with objects that evoked aspects of their personalities.

Between 1944 and 1950 Penn completed more than three hundred portrait sittings for Vogue, the subjects for which ranged from the Spanish artist Salvador Dalí to Senator Hubert Humphrey. He rarely photographed outside the formal confines of the studio during this period and approached these sessions as he did his still life studies that punctuated Vogue's pages at this time: his models faced the lens in carefully arranged poses against the simplest of studio backdrops, where nothing was left to chance. His intention was to eschew artifice and flattery in favor of a timeless clarity. His celebrated "corner portraits" date from this period (1948-1949), too. Placing two studio flats at an acute angle to create a confining space for his sitters, Penn recalled that "the walls were a surface to lean on or push against. … [L]imiting the subjects' movement seemed to relieve me of part of the problem of holding on to them" (Penn, 1991, p. 50). 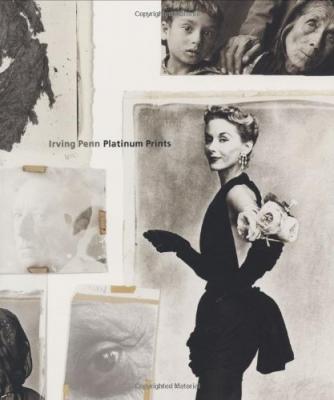 Penn's Vogue fashion photography reached its apogee with his coverage of the Paris collections of 1950. Stripped bare of props and artifice, the results appeared monumental in their simplicity, in the light of which the tableaux of Horst, Cecil Beaton, and Erwin Blumenfeld, his contemporaries in the pages of Vogue, suddenly seemed as overdressed as stage sets. Penn's uncluttered compositions against seamless gray paper, as taut and as concentrated as his portraits, remain unsurpassed as documents of haute couture at its zenith. For many of these fashion photographs he collaborated with the model Lisa Fonssagrives (1911-1992), whom he married shortly after their completion. His most famous cover for Vogue, a monochromatic study of the model Jean Patchett in fashion by Larry Aldrich, dates from 1950 and marks the first occasion Vogue ran a black-and-white photographic cover.

Besides his important work for Vogue at mid-twentieth-century, Penn began pointing his camera in new directions. In 1949, while on a fashion story for Vogue in Peru, he found a nineteenth-century daylight studio in the town of Cuzco. There, over three days, he photographed the town's residents (wearing their exotic clothing) and visitors against a painted cloth backdrop, thereby initiating a regular series of portraits documenting different cultures. This pursuit led him far afield in later years, to such locales as Dahomey, Nepal, Cameroon, New Guinea, and Morocco. He brought the same spirit of wonderment to chronicling these exotic dresses as he brought to his photographs of ethnic types and his celebrated series of tradespeople in Paris, London, and New York, which he also initiated in 1950.

Penn embarked on his nude studies in 1949, continuing to work on them intermittently between Vogue fashion assignments, to which they stand in stark contrast. His subjects were in his own words "soft and fleshy, some very heavy." But he required the same of them as he did his fashion models: it was "more important [that] they were comfortable with their bodies" (Penn, 1991, p. 66). Vogue commissions and other commercial work, mostly advertising, occupied Penn for the remainder of the 1950s. In 1960 he published his first book, Moments Preserved, which contained the best of his fashion photography of the previous decade. The following year, in tandem with his Vogue duties, he began a series of annual photographic essays for Look magazine (1961-1967).

In 1964 Penn began to experiment with printing in precious metals, most notably platinum, palladium, and iridium. He continued refining these processes for exhibition pieces, which have included fashion masterworks such as Lisa in Harlequin Dress by Jerry Parnis (1950) and Sunny Harnett in Ben Reig Silk-Chiffon Blouse (1951). Penn became increasingly disenchanted with fashion photography in the 1960s and from then on his photographs in Vogue's fashion pages became something of a rarity. "Nowadays," he told one commentator, "all that is required is a banal photograph of a girl in a dress." From the mid-1970s Penn regarded original work for exhibitions and books as more creatively fulfilling than editorial commissions. However, his beauty and still life compositions, and occasionally fashion pictures, continue to be published by Vogue almost on a monthly basis; thus, with more than sixty years contributing to the magazine, he is its longest-serving photographer. With an undeniable imprimatur on Vogue, he is one of the most influential fashion photographers of the twentieth century.