Clothing industry workers, severely exploited during most of the nineteenth century in countries at the forefront of the industrial revolution (such as Great Britain, France, Germany, and the United States), made powerful efforts to form effective trade unions during the latter part of the century. The initial stages of unionization saw the creation of numerous separate unions, which tended then to go through a process of amalgamation in order to increase membership and bargaining power. This process can be seen very clearly in the case of Great Britain, for example, where by the beginning of the twentieth century, clothing workers' unions included the Amalgamated Society of Journeymen Tailors, the Amalgamated Union of Clothiers' Operatives, the Amalgamated Jewish Tailors, Pressers and Machinists' Trade Union, the London Clothiers Cutters, the Shirt, Jacket and Overall Workers, and the Belfast Shirt and Collar Workers. These joined together to form the United Garment Workers' Union (UGWU) in 1912. The UGWU subsequently added other unions, including the Scottish National Association of Operative Tailors, the London Operative Tailors, and the Amalgamated Society of Tailors and Tailoresses. With the merger in 1931 of the UGWU with the United Ladies Tailors (London) and the Waterproof Garment Workers Union, the amalgamated union changed its name to the National Union of Tailors and Garment Workers. In the United States, The United Garment Workers of America (UGWA) was organized in 1891, incorporating several earlier independent unions; the more radical Amalgamated Garment Workers Union (AGWU) broke away from the UGWA in 1914. The International Ladies Garment Workers Union was founded in 1900. Textile workers, less concentrated in urban areas, were slower to unionize; the Textile Workers Union of America was organized in 1939, and later merged with the AGWU. Similar processes of organization and amalgamation marked the history of garment and textile workers unions in the countries of Western Europe.

Once a potent force in the textile and apparel industries, labor unions have been on the decline in the post-World War II period in many parts of the world, including Central and Eastern Europe, Central America, the United States, and Europe. Among the reasons for this decline are employer resistance or anti-unionism, the increasing power of multinational corporations, inadequate statutory protection for unions and union organizing in developing countries, and the inadequacy of unions to respond quickly and efficiently to labor issues. The long-term history of the garment and textile industries has been for production to move from high-wage to lowwage (which usually means from union to nonunion) countries, or regions within countries; this poses a severe challenge to labor unions in the field.

Globalization of textile and apparel production along with the dislocation of workers from industrialized countries to developing countries have meant that unions have had to reach across national boundaries to create linkages among workers for this sector. For example, members of the Union of Needletrades, Industrial and Textile Employees (UNITE) have worked through its International Trade Secretariat to organize workers and to address basic worker rights and working conditions in Central America and the Caribbean.

Internationalization of the labor movement is not a new phenomenon; it began in the late nineteenth century in Europe. Stimulated by the economic and political conditions of various countries, such as industrial growth, increased international trade, and more competitive world markets, workers in industrialized nations became apprehensive about working conditions in developing countries and sought "to establish minimum labor standards by international agreement" (Lorwin, p. xii).

The demand for international labor standards after World War I resulted in the establishment of the International Labour Organization (ILO) in 1919 under the League of Nations. The ILO became a specialized agency in the United Nations in 1946. Through a series of conventions and recommendations, labor standards to be attained worldwide were set forth by this organization. In 1998, the ILO organized a tripartite meeting for government, employer, and worker representatives to exchange views on labor practices in the textile, apparel, and footwear industries. Its report addresses labor issues concerning workers' rights to freedom of association and collective bargaining, the elimination of child labor and forced or compulsory labor, and the end of gender discrimination with respect to employment and occupation. The representatives engaged in a social dialogue about these issues. 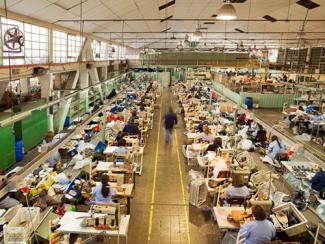 People working in a shoe factory

The International Confederation of Free Trade Union's regional organizational affiliates are found in Asia and the Pacific (APRO-Asia-Pacific Regional Organization), Africa (AFRO-African Regional Organization), and the Americas (ORIT-Inter-American Regional Workers' Organization). They act as channels of communication and maintain linkages with the European Trade Union Confederation and the Global Union Federation, of which the International Textile, Garment, and Leather Workers Federation (ITGLWF) is one of ten members.

It brings together more than 200 affiliate organizations in more than 100 countries. Affiliates include UNITE in the United States and Canada, KFAT-the National Union of Knitwear, Footwear and Apparel Trades in the United Kingdom, and the BTGLWF-Bangladesh Textile, Garment and Leather Workers Federation.

Operating as an integral part of the ITGWLF are its regional organizations in Africa, Asia, Europe, and the Americas. The issues that are addressed with its regional organizations and affiliates include: (1) the elimination of forced and child labor; (2) the promotion of occupational health and safety standards; (3) the participation of women in worker-employer dialogues, especially home workers in the informal sector as well as workers in the export processing zones in different countries; and (4) the encouragement of social responsibility by multinational manufacturers, merchandisers, and retailers. It works closely with the ICFTU, the ITSs, and nongovernmental organizations (NGOs).

In 1995, the International Ladies Garment Workers Union and the Amalgamated Clothing and Textile Workers Union merged to form the Union of Needle-trades, Industrial and Textile Employees (UNITE) in the United States. They joined forces to provide strength for collective bargaining and a voice concerning domestic and international labor issues. Since its inception, UNITE has been involved with: (1) initiating "Stop Sweatshop" campaigns to bring attention to working conditions in New York, California, and South America; (2) assisting university students in forming United Students Against Sweatshops-an organization to keep universities from selling garments made under sweatshop conditions; (3) demanding that labor standards be enforced in global trade agreements with developing countries during trade talks; (4) challenging retailers to improve working conditions and observe workers' rights in factories making their clothes; and (5) promoting the visibility of the "Made in the USA" label to help retain textile and apparel jobs in America. These and other activities help UNITE to fulfill its goals; that is, to bring workers together, to protect members' work contracts, to prepare a workers' agenda or a list of things to be accomplished, and advocate against sweatshops, nationally and internationally. In Canada, UNITE has more than 25,000 members and has called attention to its sweatshops and home workers which mostly employ women workers.

Garment and textile workers unions have responded to changing economic, social, and political conditions throughout the world by emphasizing international organization and cooperation. The issues that led to the formation of strong garment and textile workers unions in the industrialized world of the nineteenth century remain important throughout the world, and can only be addressed on an international level and with reference to the international labor standards promulgated and upheld by the ILO. In addition, NGOs, such as the Clean Clothes Campaign, the National Labor Committee, and the Women Workers Worldwide, have been established to draw further attention to labor issues worldwide. Unions face continuing challenges to organize industrial workers in developing countries, and to reach into informal sectors of production in many parts of the world, sectors in which women's and child labor continue to be exploited.

--. Codes of Conduct and Multinational Enterprises. Available from http://www.ilo.org/public/english/region/eurpro/london/download/fp3_4.pdf .

UNITE: A New Union With a Long History. Available from http://www.uniteunion.org/research/history/unionisborn.html .

United Nations Association of the United States of America. Internet Resources: Worker Rights in the Global Economy, 1999-2000. Available from http://www.unausa.org/links/gpp99link.asp .