The French word laver, meaning "to wash," derives from Latin. It came into English usage (lavendry) in the twelfth century. By the sixteenth century, "laundry" and its associated terms were commonly used to describe dirty clothes in need of washing, the place they would be washed, and the individual whose task it was to wash them.

The history of laundry, however, is much older. Ancient civilizations were familiar with many "modern" laundry practices. Archaeological evidence survives of Babylonian soap-making in 2800 B.C.E. and Egyptian laundries from around 2000 B.C.E. During the Chinese Han Dynasty (206 B.C.E.-220 C.E.) delicate silk was washed with a natural soap, probably derived from the Soapberry tree (sapindus saponaria), which was known in China as well as on the African coast at that time.

A Service for the Prosperous

In Europe, from the classical Greek era through the time of the Roman Empire and into the Dark Ages, laundries were used by the prosperous to clean clothes, and soap-making had become a craft by the seventh century. Urine, dung, and lye formed the basis of common cleaning substances, and a variety of domestic methods, utilizing streams, tubs, or troughs, were used to clean clothes and other household items. Laundresses are regularly mentioned in records from the Middle Ages, as washing was seen as women's work, but the majority of households would have used neither soap nor laundresses. Cleanliness was still an attribute of wealth.

Lye, made by passing water through ash (potash), appears to have been the most common washing substance for clothing made of materials such as flax, hemp, cotton, and wool. The alkali in lye helped release the dirt and clean water helped restore the clothes that were later laid out in sunlight to dry and bleach. Many different types of lye mix, some made with ferns, could be found across Europe. Soap, made by heating a mixture of fat and oil with lye and salt, was known in the ancient world but later was largely forgotten. Soap reappeared in Europe again from the seventeenth century onward, but for many years to come it was regarded as a luxury item; in England there was a luxury tax on soap from 1712 to 1853. Soap thus did not begin to supplant lye as the primary cleaning substance for laundering until the late eighteenth century.

By the seventeenth and eighteenth centuries, many households had rudimentary washing equipment. Stronger materials such as wool or linen were pounded against rocks or wooden blocks with smooth or ridged implements called "bats," "beetles," or "battledores." Lye, the washing substance, was produced from a lye dropper-a wooden box with holes in the bottom fitted over the washtub. Washing "dollies"-poles with ends shaped like a cone -were used to plunge washing around in tubs of boiling water and became popular in the nineteenth century. 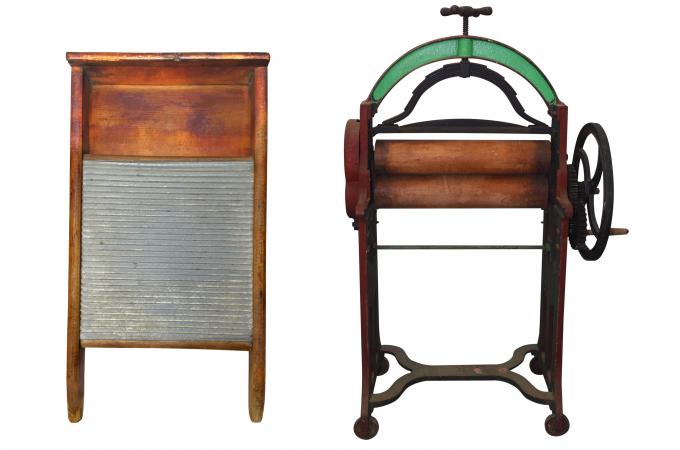 However, until the eighteenth century, laundry methods and equipment remained largely unchanged. In the eighteenth century, early washing-machine design was underway as well as laundry recipes and equipment, including handmade mangles and scrubbing boards. Washboards were becoming more popular and were used with wider bath-shaped tubs. These devices were quicker and easier to use than the dollies. Eighteenth-century chemical discoveries and nineteenth-century advances in mechanization spurred the development of improved laundry processes and services.

During the early part of the nineteenth century, laundry work remained a small-scale, technologically unsophisticated trade, often performed by women in their own home or their employer's home. Toward the end of the nineteenth century, cities and services expanded, and women's employment outside the home increased, as did the size of the "middle classes" with substantial laundry needs. The diffusion of fashionable clothing to a larger segment of the population in the nineteenth century expanded the demand for laundry services. The growth of office employment-classic "white collar" work-led to increased demand for laundry services, as clean clothes were seen as a sign of status for such workers. Other workers (such as women in domestic service) also were increasingly expected to wear clean uniforms and aprons so that by the late nineteenth century, washing expenses incurred by laboring families were sometimes equal to half the sum they spent on rent.

These social developments, and the emergence of effective machinery, improved bleaching agents, and color-fast synthetic dyes led to the increased industrialization of laundry services. By the middle of the century, laundry had become a large-scale modern industry. In Great Britain public laundries came into being in the mid-nineteenth century; in the 1890s there was a sharp increase in power laundries. By the 1890s mechanized steam, gas, and electricity helped to fuel the service-sector growth of laundries. From 1890s to World War I, there was a move toward large steam laundries in Britain and America.

Economic relations, of course, determined not only what, but who washed the clothes. Laundry work historically had been primarily the work of poor women, and this remained true with the industrialization of laundry work in the nineteenth century. In the United States from around 1850, Chinese men also became associated with laundry, and by the 1880s, for example, 10 percent of the men in San Francisco's Chinese community worked in the laundry trades. By 1900, when piped water became more commonplace in many parts of the United States, most large American towns had a Chinese laundry, which offered both cleaning and pressing services. Both European-style steam laundries and Chinese hand laundries in the United States were associated with poor employment conditions, and pioneering social reformers produced studies that revealed long hours and arduous labor demands in the industry. 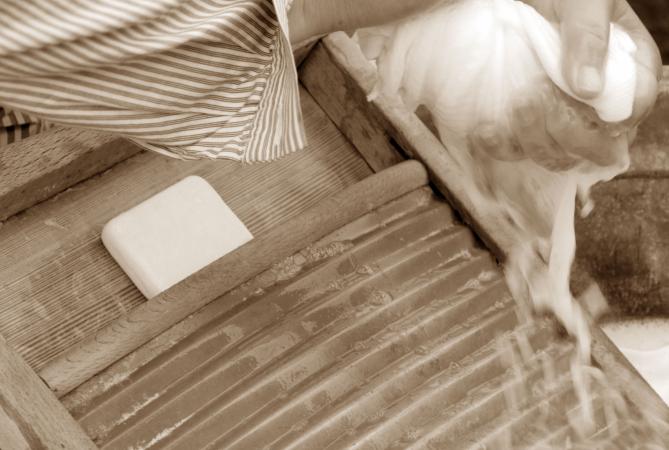 By the nineteenth century, chlorine, detergent, water starches, and blue bleaches were in use. Around 1850-1880 hard bars of soap (brands such as Sunlight) became more popular. Soap was still expensive, and it was not yet differentiated into "laundry soap" and "hand soap;" one bar would be used for all cleaning purposes. Soap flakes, pioneered in 1830, became ubiquitous from the turn of the century, culminating in the introduction of Persil (1906/07) in England. Persil offered a combination of washing and bleaching agents in one powder, and was followed by Hudson's new range including Omo (1908) and Rinso (1910).

The idea that new types of gentle but effective cleaning products were needed, coincided with the emergence of new fabrics, such as rayon (1910), acetate (1927), and more significantly, nylon (1939). New materials transformed the lingerie and fashion industries, but could be neither dry-cleaned nor roughly pounded during washing. The development of easy-to-wash, stable, "drip dry" contemporary fabrics, such as polyester and nylon and so many derivatives (bri-nylon, nylon chiffon, leather-look simplex, fake fur, and more), saw the reduction of demand for public laundries, along with the expansion of the dry-cleaning industry. Dry cleaning was inadvertently invented in 1849 when Parisian tailor Jolly Bellin accidentally spilled turpentine and learned to remove stains from a table cloth. By 1866, dry cleaning was a growing business. Pullars of Perth was offering a postal dry cleaning service anywhere in the British Isles and had developed advanced cleaning methods using petroleum and benzene, as well as specialist skills to deal with unstable fabrics. Dry cleaning, as compared with laundry work, demanded new kinds of expertise about volatile materials-not just dyes, but also finishes, interfacing, linings, buttons, trims, and threads now being used in contemporary fashion.

From 1914 onward, advertisements in newspapers, magazines, and journals linked cleaning products to female users, modernity, and social improvement. More women again were doing the washing at home. Cleanliness was a sign of gentility and respectability. Middle-class anxieties about dirt brought a new focus on "hygiene" at home and in the colonies; the phrase "the great unwashed" equated dirt with lower-class status or foreignness. Unilever's advertising slogan linked cleanliness to more than godliness, declaring that "soap is civilization."

The first electric washing machine was introduced in 1906. After World War II, radio and television promotions for soap and detergent, pioneered in America by Procter & Gamble, coincided with the expanded use of washing machines; General Electric introduced a fully automatic model for home use in 1947. The rise of self-service launderettes or Laundromats in the 1950s also contributed to the laundry industry's decline and refocus on the hotel and business sector of the market. A century after it had become industrialized in the public realm, laundry moved back to the privacy of the home, where automatic washing machines became the standard way of dealing with the family wash and fueled the market for effective but clothing-friendly detergents. While the chemical dry-cleaning industry continued to prosper, industrial laundries in Britain and America continued to serve commercial clients, but no longer the family.

Advertising to a New Audience

Postwar detergent and appliance advertising that also covertly promoted doing the laundry as appropriate and stereotypical "feminine" behavior increasingly legitimated women washing clothes at home. Toward the end of the twentieth century, major detergent and soap-powder brands owned by soap conglomerates such as Procter & Gamble and Unilever, even targeted "new" men and women without families, suggesting it is easy/sexy/enjoyable to wash clothes. These advertisements, often for phosphate-based cleaning brands, mean certain washing products continue to dominate the international supermarket shelves, with little choice between brands. The irony is that many laundry-product advertisements convey doubtful social messages, and the products themselves contribute to environmental problems; the desire for clean clothing has been largely solved in the early 2000s, but not without creating other social costs. 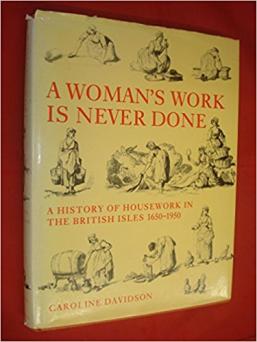 A Woman's Work Is Never Done