The name Levi Strauss is indelibly linked with a quintessential American fashion-blue jeans. The original riveted work pants, called "waist overalls," were patented by Levi Strauss in 1873 and became staples of quality, durable workingmen's garments for more than fifty years. In the 1950s blue jeans, particularly Levi Strauss classic riveted "501's" emerged as fashion statements, anticipating the skyrocketing popularity of denims worldwide in the following decades. The dominance of Levi's in this fashion phenomena transformed Levi Strauss & Co. from a successful regional company into one of the world's largest clothing brands, with $4.1 billion in total sales in 2002.

While Levi Strauss & Co. has aligned itself more closely with style and fashion in the twenty-first century, its origins were humble and rooted in the dry goods trade. Its founder, Levi Strauss, was born "Loeb" Strauss in Buttenheim, Bavaria, in 1829, one of seven children of Hirsch Strauss. In 1847, Loeb Strauss immigrated to the United States to join his stepbrothers, Jonas and Louis, owners of a dry-goods business in New York City. Loeb quickly learned the family trade and by 1850 he had changed his name to Levi.

The discovery of gold in California and the subsequent Gold Rush of 1849 brought throngs of fortune hunters west in the hopes of striking it rich. In 1853, Levi Strauss headed to San Francisco, too, not to pan for gold, but to establish his own dry-goods business catering to this new workforce.

Levi Strauss set up his wholesale business selling bolts of cloth, linens, and clothing at 90 Sacramento Street, close to the waterfront for convenient access to goods coming off ships. In the late 1850s and early 1860s, his enterprise, known merely as "Levi Strauss," profited, and its steady expansion forced him to relocate several times to other waterfront addresses. In 1863 his brother-in-law, David Stern, joined his firm, and the company was officially renamed Levi Strauss & Co. By this time, Levi Strauss was in his thirties and the firm was a profitable entity providing a variety of goods. The next decade, however, would assure Levi Strauss his place in fashion history.

In 1872, Levi Strauss was contacted by one of his customers, Jacob Davis, a tailor in Reno, Nevada. Davis had discovered a practical and ingenious way to make work pants stronger by adding metal rivets to the weak points at the pocket corners and the base of the fly. Davis's rivets proved successful and his new reinforced work pants became popular among his local clients. Fearful that his idea would be copied, Davis wanted to secure a patent, but did not possess the $68 necessary to file for a patent. Instead, he turned to Levi Strauss, a successful wholesale goods purveyor from whom he often purchased fabric, and offered to share the patent if Levi Strauss & Co. would underwrite the expense.

Levi Strauss recognized the potential in this endeavor and agreed to share the patent. In 1873, Davis and Strauss received patent #139,121 from the U.S. Patent and Trademark Office for an "Improvement in Fastening Pocket-Openings." The riveted "waist overalls" (as work pants were then known) quickly achieved a reputation for strength, quality, and durability among working men. For twenty years Levis Strauss & Co. held the patent on riveted waist overalls, thereby curbing competition from other manufacturers. In 1890 the lot number 501 (which it would thereafter retain) was first used to designate the riveted waist overall. The following year, the patent expired and went into the public domain, where riveted waist overalls were quickly copied by other firms. However, the demand for Levi's waist overalls continued to grow, forcing Levi Strauss & Co. to open several manufacturing plants of its own in San Francisco.

By the turn of the century, Levi Strauss was in his early seventies and highly regarded as a successful businessman and philanthropist. He died in September 1902, a lifelong bachelor, leaving the bulk of his $6 million estate to relatives and to his favorite charities. With his four nephews running the company, Levi Strauss & Co. continued to thrive and became one of the leading companies producing work pants in the 1920s.

The company's market, however, was still restricted to predominantly western states and to the niche of work clothing. In the 1930s and 1940s, Levi Strauss & Co.'s sphere of influence got a boost from Hollywood through western movies. Popular westerns mythologized cowboys and cowboy dress, including the waist overalls. It was during this period that denims became associated with the ideals of honesty, integrity, and rugged American individualism.

After World War II, Americans enjoyed a level of prosperity marked by greater leisure time. Denims, including Levi's, began to lose their connection with manual labor and emerged as appropriate casual dress. Pivotal to the acceptance of denims was their adoption by teenagers, an increasingly vocal and important market group. When the actor James Dean wore blue jeans in the film Rebel Without a Cause, denims attained a completely new status as cool fashion. By this time, the term "waist overalls" was no longer used; denims were known as jean pants or simply as "Levi's."

Growth in the Jeans Market 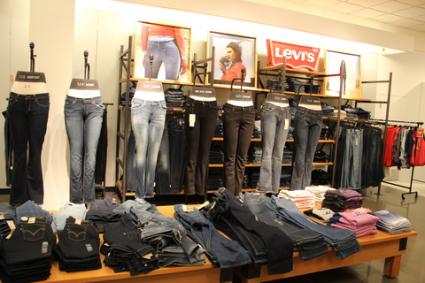 In the 1960s denims continued their evolution as acceptable leisure wear. As a result, denim producers such as Levi Strauss & Co. and Lee (another former working-pant manufacturer) continued to expand. The 1960s was an important decade for fashion-one which witnessed challenges to the traditional haute couture system and the rising popularity of more democratic, street-inspired fashions. Denims emerged as a symbol of individualism and anti-establishment fashion, much to the benefit of Levi Strauss and its competitors. During the height of the hippie era, Levi Strauss & Co. even sponsored a competition to promote the personalized decoration of Levi's jeans.

Founder Levi Strauss could never have foreseen the meteoric rise of Levi Strauss & Co. in subsequent decades. As tastes changed in the 1970s, denims were transformed from leisure wear to high fashion at the hands of designers such as Calvin Klein. Denims now became acceptable dress for all occasions. In the 1970s and the 1980s, Levi Strauss & Co. dominated the market for blue jeans, which became a de facto uniform for youth in America and abroad. Demand for American Levi's in Europe and around the globe was widespread. In Eastern block countries American Levi's jeans even attained the status of black-market cash in the early 1980s.

The importance of the Levi Strauss brand name in the denim market has been enormous. Through clever marketing and hip advertisements, Levi's capitalized on the revival in popularity of the "classic" 501 button-fly jeans in the mid 1980s. By 1990, Levi Strauss & Co. was an international manufacturer with a global market, selling under the brands Levi's, Dockers, and Slates. Only in the late 1990s and early years of the twenty-first century has Levi Strauss & Co. seen a slight reversal of fortune. Changes in taste, from traditional blue to other colors and the revival of retro-1970s flared leg and baggy, hip-hop silhouettes has worked against Levi's classic-cut jeans in favor of trendy styles marketed by new competitors such as Tommy Hilfiger and Guess. Since the 1990s, Levi Strauss & Co. has been forced to restructure its company to remain competitive. Ironically, Levi's "classic" denims are no longer manufactured in the United States, the production having been entirely shifted to overseas manufacturers with cheaper labor.

Despite competition from the Gap, Tommy Hilfiger, and Guess jeans, Levi Strauss & Co. remains the standard bearer in the denim world. With roots in the settling of America's west, Levi Stauss & Co. has come full circle achieving (and retaining) iconic status as the maker of the quintessential American garment, still popular throughout the world.