The logo (logotype) is the emblem or device used to identify a particular company or organization. The design of a logo may be based around the name or initials of a company using a distinctive letter form, such as Coca-Cola (first used in 1887). It may also be a visual symbol of abstract or figurative design, such as the Nike swoosh (designed 1971). In order to function effectively a logo must be easily recognized in a variety of forms-on products, packaging, and advertising.

The logo is the modern equivalent of the maker's stamp; the hallmark or trademark that indicates the authenticity of a product. Logos, like monograms, heraldic devices, flags, and crests, are forms of graphical devices that have been used to indicate the origin, ownership, and status of property and people.

Law protects modern logos, so that the form, color, shape, and graphical detail of any mark cannot be copied or closely imitated without legal redress. This legislation was put into place in the mid-nineteenth century in Europe and America, and is now effective across national borders.

The logo is central to any company's concept of its brand. As the graphic designer Milton Glaser once said, "The logo is the point of entry to the brand" and is used to encapsulate all that a brand may stand for. A logo with a high recognition factor can be a major financial asset to any business, and therefore it sits at the heart of any corporate identity policy. A manufacturer's product range may change from season to season, but successful logos are rarely tampered with and, when design changes are made, they are usually subtle rather than radical. Logos also need to be adaptable to a variety of uses. The interlocking CC logo of Chanel, like many logos used by the garment industry, work well as both a repeat pattern on fabric and as an embossed button on a coat or jacket. The "Medusa head" logo used by Versace was adapted from a classical architectural motif. It can be used in print or relief, and appears on stationery, packaging, buttons, cosmetics containers, and tableware.

The use of the logo as a decorative element was traditionally the preserve of the luxury goods sector (rather than the clothing industry). Leather goods (luggage and saddlery) companies have exploited the familiarity of their logos and signature patterns as they compete in the high-fashion market. The French luggage company Louis Vuitton (founded 1854) first used its monogram in a repeat-patterned canvas in 1896, and the monogram fabric has been a staple of its collections ever since. The monogram pattern has been reinterpreted by a succession of designers from the mid-1990s, including Marc Jacobs and Stephen Sprouse. Gucci's monogrammed fabric, using the GG logo adopted in the 1960s, appeared for many years on handbags and as linings before being used for clothing.

From Inside to Outside 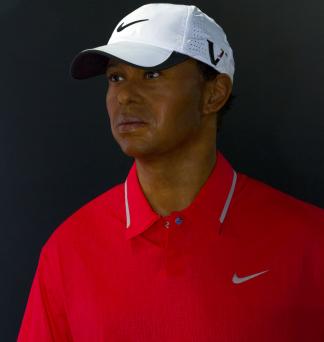 One key factor in the development of fashion branding has been the shift of the "signature" or logo from the inside to the outside of the garment. Conventionally, the designer or manufacturer's label would be sewn inside a garment, originally to guard against the illegal copying of fashion house models. In the field of sportswear, logos began to be more prominent in the 1940s, when the brand named after the tennis star Fred Perry borrowed the idea of the team or club crest, displayed on the breast of shirts and sweaters. In the 1970s, when sportswear was worn increasingly off pitch, court, or course as leisurewear, brands such as Lacoste and Fred Perry used their logos to brand generic garments like the polo shirt. This first wave of fashion sports brands was eclipsed by the phenomenal rise of global sports corporations such as Nike in the 1980s and 1990s.

The "designer decade" of the 1980s introduced many more designer logos to the mass market, where they became adopted as part of street culture. Logos associated with status and expense, such as BMW and Mercedes car mascots in the shape of corporate logos, were worn as jewelry by American rap artists. Heavily branded sportswear by Nike and Tommy Hilfiger (where the logos became increasingly prominent) was worn with a brash, competitive attitude and an emphasis on "box-fresh" products. Between 1995 and 2000, several high-fashion brands including Gucci, Fendi, Dior, and Louis Vuitton produced collections almost entirely focused on the repeat use of the logo (dubbed "logomania" by the style press).

Reaction to this visibly over-branded culture has been strong. One economic and legal side effect has been the flourishing of a counterfeit trade in clothes and accessories where fake logos are applied to unlicensed and inferior goods. The other effect is cultural and political. Global brands have come under attack by the so-called "No Logo" generation (named after Naomi Klein's 1999 book of that title), who reject overtly branded goods as symbols of late capitalist economic exploitation and social inequality.