In the media industries of fashion, film, television, and theater, an increasing number of runway shows, photographic shoots, and film and theater productions rely on the specialized skills of the makeup artist to communicate style and image.

When Maurice Levy designed the first retractable lipstick in 1915, no one could have guessed how popular cosmetics would become or how significant the role of the makeup artist would be in such emerging new fields as fashion photography and cinema production. Indeed, the concept of "makeup artist" hardly existed at the time. Until well into the twentieth century, theatrical performers were expected to do their own makeup, as they were expected to supply their own stage costumes. The professional makeup artist, like the theatrical or cinematic costume designer, is a modern phenomenon.

For much of the twentieth century, the role of the makeup artist remained a largely anonymous one, as audiences focused on the face of the model or actor rather than the makeup techniques that enhanced it. But makeup artists in fact have a great deal to do with how an actor or model looks in any given performance or production. The looks created evoke a theme, and it is important that the makeup be correct or else the artistic theme will be obscured or inaccurate, particularly when the makeup artist's task is to evoke a particular historical era or setting. While the image created by the makeup will always be paramount, by the early twenty-first century the makeup artist's expertise was receiving greater cultural recognition, and the role of the professional makeup artist had become a more conspicuous one. 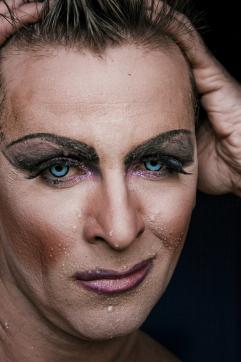 Spaces where the made-up face is viewed include theaters, films, and photographs; the makeup artist's workplace is the dressing room, the film set, and the photographer's studio. The techniques of makeup used in these spaces are quite different from those of cosmetic makeup, and the professional makeup artist's skills are typically acquired over the course of a long period of training and practice. The heavy greasepaint and pan-stick used for theatrical makeup require special techniques for effective use. They are designed to work in harmony with strong lighting, which the makeup artist must anticipate while doing the makeup under weaker light. What might appear exaggerated and excessive in normal lighting will appear natural to a theatrical audience watching a performance on a lit stage. The applied shading and highlighting may be deliberately over-emphasized by the makeup artist to increase the impact of the designed look for stage, screen, or catwalk.

Makeup artists build on their training, technical skills, and personal experience to develop an individual style. For example, Serge Lutens, who worked for many years with the Japanese cosmetics company Shiseido, prefers to be acknowledged as an artist who uses makeup. His style has been inspired by the cultures of China and Japan, and particularly by the highly artificial makeup of the Japanese geisha. He is famous for creating a geisha-like oval facial effect on the models he uses for photographic shoots. Lutens dramatically changes the faces of his models, and it is often impossible to recognize even the most famous models when he has made them up. Topolino is also recognized as an innovator in professional fashion makeup. Since the 1980s his work has broken the mold of established practice in fashion makeup, and he is known for his ability to create new looks every season for designers. Another makeup artist who has raised the prestige and visibility of the profession is Sarah Monzani, who designed the looks for the 1996 film Evita, starring Madonna. Some makeup artists have achieved star quality in their own right; some, such as Laura Mercier, have built upon their artistic success to become entrepreneurs in the cosmetics business. These successes have helped to establish a healthy reputation for expertise and creativity for the profession of makeup artist as a whole.

Makeup in the Fashion Industry

Makeup artists in the fashion industry have used conventions and techniques drawn from theater and film to expand their individual styles. The result has been a change in the face of fashion, on catwalks, in magazine editorial content, and in advertising. Prosthetic and special-effects products are used to adorn the face and the body. Feathers and crystals are used to morph the body from its human form and recreate it in statuesque or animal proportions. Makeup artists create ghostly or ghoulish looks that reference the horror film genre, and film noir is a fertile source used to create the femme fatale often seen in the pages of monthly fashion magazines.

The makeup artist today is not bound by traditional materials, styles, and conventions, but is able to call upon a wide range of techniques to create innovative effects. While new materials and techniques expand the range of possibilities available to the makeup specialist, the success of performed roles in theater, film, and fashion will continue to depend heavily on the skill and artistic vision of makeup artists.

Comments
© 2006-2021 LoveToKnow, Corp., except where otherwise noted. All Rights Reserved.
Makeup Artists in the Fashion Industry