There are several historical strands that led to the development of the modern female fashion-display mannequin. From the fifteenth century, the miniature fashion doll (known as a "milliners' mannequin") was sent by dressmakers to wealthy customers, or exhibited for money by dressmakers to customers who wanted to copy the fashions. Other precursors of the fashion-display mannequin include artists' lay figures (life-sized wooden dolls used by artists); anatomical wax models, used for teaching medicine; and, finally, tailors' dummies. These examples utilized expertise in modeling representations of the human figure in wood, cane, papier-mâché, and/or wax.

The first wickerwork mannequins appeared in the mid-to late-eighteenth century and were made to order. In 1835 a Parisian ironmonger introduced a wirework model, and it was in France in the mid-nineteenth century that the first fashion mannequins were developed. Among the first mannequins to be patented were those designed by Professor Lavigne. He had begun manufacturing tailor's dummies, but won a medal in 1848 for his patented trunk mannequin, and opened a mannequin house in France in the 1850s. He went on, together with a student of his, Fred Stockman (who founded Stockman Brothers in 1869, later Siegel and Stockman's) to develop mannequins with legs and realistic heads and hands made from wax, improving on the earlier and cruder papiermâché ones. When clothed, these wax mannequins appeared strangely lifelike, with features detailed down to individual hairs and glass eyes. The market for fashion mannequins quickly opened up with the department stores built in Paris in the 1850s and soon after that in America and Britain.

It was Paris that defined fashion from the mid-nineteenth until the mid-twentieth century, and the French mannequin manufacturers were able to exploit this reputation. Not only were French mannequins technologically advanced-fueled by the investment in shops and display in France-but notions of what was fashionable at any one point were centered on France, so French mannequins were considered the apex of fashion. Their new designs were also regularly exhibited at the international expositions, with French models usually winning prizes, thus enhancing their fame and desirability.

The arrival of electricity was important to the appearance of the mannequin, as the faces of wax models would suffer in the heat of the window. It was imperative that new materials be found. In the 1920s, the French firm of Pierre Iman's perfected a lighter and heat-resistant material, "Carnasine," a plaster composite which would take the mannequin into a new, faster phase of change and mass production. By 1927 the French firm of Siégel and Stockman had some 67 factories in New York City, Sydney, Stockholm, and Amsterdam and had acquired agents in other parts of the world. They also employed the architect-designer René Herbst as an artistic advisor, and under his aegis the mannequin became an icon of the moderne style. 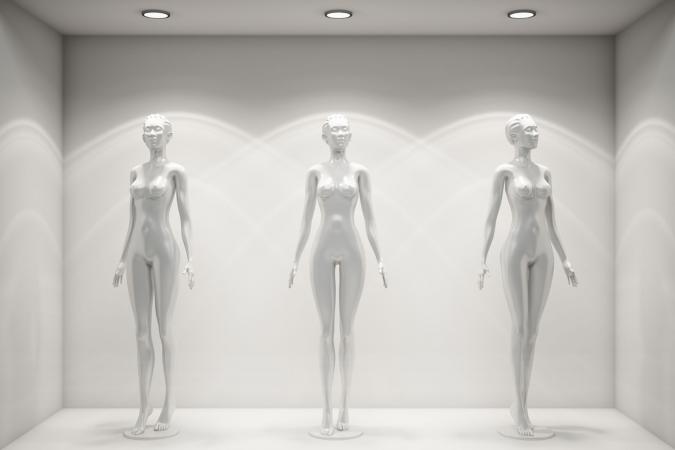 At the end of the nineteenth century, the female mannequin had become a silent muse for artists and photographers who were appropriating mass culture as subject matter. The photographer Eugene Atget photographed shop windows, and later Erwin Blumenfeld photographed mannequins as though they were human. These images resonated with the Surrealists who would use mannequins as subjects: from Man Ray's photograph of a Siégel mannequin at the 1925 Paris Exposition des Arts Décoratifs, published in the Révolution Surréaliste magazine, to the sixteen mannequins dressed by different artists and writers (including Salvador Dali, André Masson, and Eileen Agar) that were used as the central motif in a room at the Parisian Exposition Internationale du Surréalisme in 1938. The mannequin even became the subject of a film, L'Inhumaine, designed by artist Fernand Léger in 1924.

On the other hand, mannequin designers drew on ideas in works by artists such as Pablo Picasso, Marcel Duchamp, and Jean Cocteau, modeling mannequins with abstracted features and dislocated figures. The aesthetic that these extreme mannequins, usually French in origin, represented was one which appealed in particular to the elite boutiques, and it began to look outdated, as a new popular aesthetic swept in from America.

In the 1920s and 1930s the American film industry was providing an international visual language that would influence both the design of window displays and the appearance of mannequins. By the 1930s American mannequin designer Lester Gaba had produced mannequins of the film stars Marlene Dietrich and Greta Garbo, and a Shirley Temple mannequin produced by Pierre Iman's was sold on both sides of the Atlantic. Film stars imparted glamour to the window display, which was itself looking more like a film set than ever. While World War II halted mannequin production in Europe, in America production increased, and mannequins continued to reflect the American mass aesthetic. In their expansion, American firms like D.G. Williams and Lillian Greneker were aided by a material new to mannequin production-plastic.

In the 1950s, mannequins represented a sophisticated and grown-up glamour. It wasn't until 1966, when mannequin designer Adel Rootstein produced models of Twiggy and Sandie Shaw, that the emergent youth culture was reflected in shop windows.

In the late-twentieth century, supermodels and television stars served as models for fashion mannequins. Conversely, the mannequin again became a subject for artists as fashion photographer Deborah Turbeville featured mannequins extensively in her work, and fashion illustrator Ruben Toledo designed a plus-sized mannequin for manufacturer Pucci. Mannequins have also captured the interest of designers like Alexander McQueen, whose innovative shop windows provide alternatives to the ubiquitous visual merchandising of the large fashion chains.