Natural dyes are obtained from natural sources. Most are of plant origin and extracted from roots, wood, bark, berries, lichens, leaves, flowers, nuts, and seeds. Others come from insects, shellfish, and mineral compounds. Natural dyes were the only source of color for textiles, leather, basketry, and other materials until synthetic dyes were developed in the latter half of the nineteenth century. Of the thousands of natural color substances, very few became significant commercially. Dyestuff refers to the plant or other material from which the dye is extracted. Complete palettes are achieved by dyeing in one bath and sequential dyeing in two or more baths.

There are two types of natural dyes. Adjective or additive dyes such as madder must use a mordant (a chemical that fixes a dye) to bond with fibers. These are the most common type and have been used for at least 2,000 years. Substantive dyes bond with a fiber without the use of a mordant or they contain tannin, a natural mordant. Examples of substantive dyes include safflower, cochineal, and black walnut. Mordants are chemical compounds that combine with the fiber and the dye forming a chemical bridge between the two. Madder, cochineal, and other commercially important natural dyes are poly-chromic, meaning that they yield different colors with different mordants. Common mordants are weak organic acids, such as acetic or tannic acid, and metal salts including aluminum ammonium or potassium sulfate, ferrous sulfate, and copper sulfate. Usually, the textile to be dyed is simmered in a mordant solution before dyeing (pre-mordanting). Other options include adding the mordant to the dyebath or treating with another mordant after dyeing to shift the color.

Natural dyes are used in small quantities by artists and craftspeople. Some commercial use of natural dyes is a response to concerns about synthetic dyes and environmental pollution. Natural dyes are a renewable resource and contribute to rural economic development. However, in most commercial applications, natural dyes do not compete with synthetic dyes that are available in more colors, more uniform in composition facilitating color matching, and of known ratings to fading agents. Contrary to common assumptions, some natural dyes have excellent fastness to light, cleaning agents, water, and perspiration. Commercially available natural dye extracts facilitate color matching and make the dyeing process less involved.

Evidence of well-developed dye works exists in many parts of the world. Ancient Egyptians, Phoenicians, and Peruvians were known for their excellent dyeing. Italian dyers were among the best from Roman times through the sixteenth century. Dyers from India were supreme in dyeing cotton. Dyers in China specialized in dyeing silk. Natural dyes were major trade items throughout history until the development of synthetic dyes. By the early years of the twentieth century, natural dyes had been replaced in most applications. However, most of these dyes remain important for artists, craftspeople, and niche producers.

Yellow dyes are the most numerous natural dyes, but most are weakly colored with poor lightfastness. The most important yellow dye in Europe was weld (Reseda luteola), which had better lightfastness than the dyes imported from Asia: saffron (Crocus sativus), safflower (Carthamus tinctorius), and quercitron (Quercus tinctoria nigra). Osage orange (Maclura pomifera) is a contemporary dye extracted from wood and sawdust from a native North American tree. 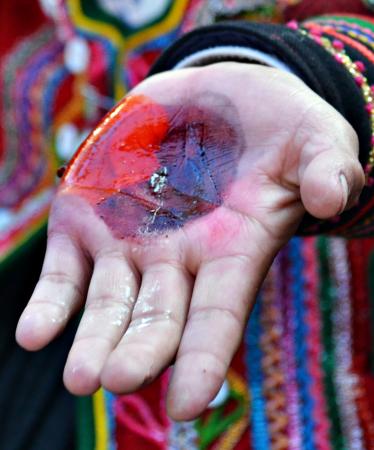 Red dyes included madder, cochineal, kermes, lac, cudbear, and brazil wood. Madder is a fast, rich-red dye obtained from the root of the Eurasian herbaceous perennial Rubia tinctoria. It was used in a long and complex process to produce Turkey Red on cotton and wool. With different mordants, madder produces a range of colors. Insect dyes include cochineal (Dactylopius sp.) from Central and South America, kermes (Kermoccus vermilis) of the Mediterranean region, and lac (Lakshadia chinensis and communis) of Asia. Cudbear (from Ochrolechia, Lasallia, and Umbilicaria spp.) is a lichen dye from northern Europe. Brazil wood (Caesalpinia spp.) from Asia and South America produces red, pink, and purple. Of these, madder and cochineal were the most important and the most readily available to contemporary dyers.

Indigo is extracted from the stems and leaves of plants of the Indigofera species from India, Central America, and Africa and from woad (Isatis tinctoria) from Europe. Indigo, originally from India, is used for cotton, wool, and silk. Woad was an important source of blue in Europe until it was replaced by imported indigo. Indigo from all sources was fermented to produce the dye. The dye must be reduced to be absorbed by the fiber and the fabric exposed to oxygen to develop the blue color.

Log wood (Haematoxylon campechiancum L.) from Central America was one of the most important black dyes. It also was used for blue and purple. Black walnut (Juglans nigra) is used in the twenty-first century to produce substantive black and brown dyes.

Purple dyes have been among the most difficult natural colors to achieve in large quantities. Shellfish (or Tyrian) purple was removed from shellfish of the species Murex found in the Mediterranean Sea and Purpura found along the coasts of Central America. Orchil, another important purple dye, was derived from lichens.

Contact dyeing is an alternate method in which the dyestuff, a tiny volume of water or other liquid, sodium chloride or mordant, and found materials like rusty nails or copper wire are placed in and around the textile that is sealed in a plastic bag or glass jar for several days, weeks, or months. Contact dyed textiles have unusual, one-ofa-kind patterns.

Casselman, Karen Leigh. Craft of the Dyer: Colour from Plants and Lichens of the Northeast. Toronto: University of Toronto Press, 1980.