Seamstresses formed the main labor force, outside tailoring, which fueled the expansion of clothing production and related trades from the seventeenth century onward. This expansion was not dependent initially on technological developments or the introduction of a factory system, but on the pool of women workers. Their expendability and cheapness to their employers was effectively guaranteed by the sheer number of available women able and willing to use a needle, their general lack of alternative employment, and by the fact they then worked outside the control of guilds and latterly have been under-unionized. These seamstresses sewed goods for the increasing market for ready-made basic clothes such as shirts, breeches, waistcoats, shifts, and petticoats for working people, or slops as they were known (after the practice of sailors who stored their working clothes in slop chests). Their history is largely anonymous. However, social and economic historians with an interest in gender are now extending the knowledge of seamstresses' central role in the historical growth of clothing production and consumption.

Historic Role of the Seamstress

At the cheaper end of the trade, the work of seamstresses did not involve complex cutting, fitting, or designing, though there were no hard and fast rules. "Seamstress" has always been a flexible term, with the work involved dependent on local conditions and the agency of individuals. Some elaboration and finishing was involved, such as tucking or buttonholes. While work done in this style continued, seamstresses were generally distinguished from dressmakers, milliners, mantua-makers, stay-makers, embroiderers, and tailoresses by their lower levels of craft and skill, but at the top-end of the market fine sewing was valued. Their existence was precarious and exacerbated by layoffs due to seasonal demand and unpredictable changes of fashion. In the Victorian period, widespread demand for mourning clothes, short notice given for elaborate evening dresses, and fickle customers were commonly cited as causes of distress through overwork.

There were large numbers of seamstresses in a wide range of situations. They frequently worked as outworkers, on per-piece pay, in small workshops or in their homes. Having learned their trade in waged work, many seamstresses continued to use their skills after marriage by taking in work, often making simple garments or restyling old ones in their own poor communities where they played an important role in the provision of cheap clothing outside the regular retail trade. Some seamstresses were employed in a temporary but regular visiting capacity in wealthier households where they supplemented existing domestic staff and worked by arrangement through an accumulation of sewing and mending tasks, in exchange for a day rate of pay and meals. This practice lingered until World War II in some areas of Britain.

"The Song of the Shirt" by Thomas Hood

With fingers weary and worn,
With eyelids heavy and red,
A Woman sat in unwomanly rags.
Plying her needle and thread-
Stitch! Stitch! Stitch!
In poverty, hunger, and dirt,
And still with a voice of dolorous pitch
Would that its tone could reach the Rich!
- She sang this 'Song of the shirt!'

"Riding an omnibus through … [London's commercial districts] at the turn of the century, one could hardly avoid noticing gaunt and harried women and children scurrying through the streets … carrying heavy bundles … passing along from workroom to workroom the shirts, suits, blouses, ties and shoes that soon would dress much of the world." (Schmiechen, p. 1)

Seamstresses and the Sewing Machine 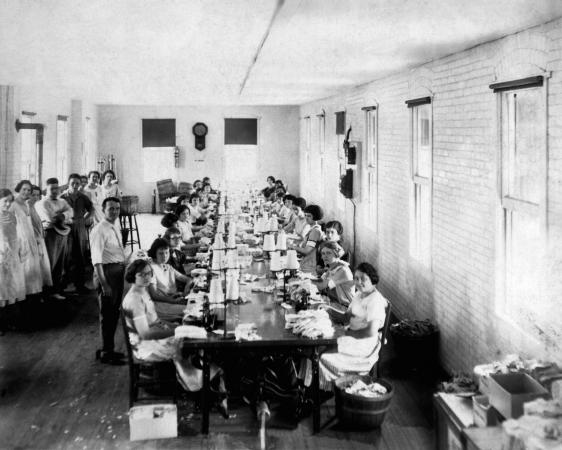 The widespread use of the sewing machine from the 1860s increased the pace of production of clothing because it could stitch up to thirty times faster than a hand sewer, but it did not immediately result in centralized factories becoming the dominant means of production. Clothing production remained characterized by many small-scale businesses, often subcontracting work, and by the subdivision of the various tasks involved in the making of a garment, using many outworkers and home work-ers. This drove down prices and wages and produced the sweatshop system in which many seamstresses worked very long hours for low wages. Despite well-meant attempts to reform the trade, pay and conditions remained bad throughout the nineteenth century and well into the twentieth. It was said that a practiced observer could identify a seamstress in the street because of her stooped carriage. Seamstresses in outworking were vulnerable to employers who could withhold or delay payment if work was deemed substandard. It was common practice for seamstresses in this kind of work to have to pay for their own thread, needles, and candles, in addition to their heating and costs of collecting and returning the work. "My usual time of work is from five in the morning till nine at night-winter and summer.… But when there is a press of business, I work earlier and later.… I clears about 2s 6d a week.… I know it's so little I can't get a rag to my back" (London shirt maker talking to Henry Mayhew in 1849, cited in Yeo, p. 145). Despite enormous disadvantages, it was seamstresses who staged the first all-female strike in America, in New York in 1825. Apprenticeship provided one means, however, unreliable and open to abuse, for women to learn the better end of the trade. Some women found that the clothing trade presented opportunities for them to trade effectively as seamstresses on their own account or to work as middle women, putting out work. Health and safety legislation, greater unionization, and factory production have combined to improve the lot of women working in the late twentieth and early twenty-first centuries in the clothing trades; nevertheless, globally, it remains a fragmented industry with widespread homework and low wages.

Prints and paintings, often sympathetic if moralistic, frequently showed individual women bent over their sewing, in shabby interiors, sewing either to support themselves or their families. Middle-class women, fallen on hard times, were also depicted eking out a living in this way, a particular anxiety in Victorian Britain. Allegations of immorality, including prostitution, were frequently made, based on perceptions of the effects of poverty or, in better-class workrooms, the supposed temptations caused by familiarity of young seamstresses with fashion and luxury beyond their means. In Britain in 1843, Thomas Hood's poem The Song of the Shirt dramatized their plight and helped focus attention on potential reforms to wages and conditions, mostly without long-term effect. In 1853 Elizabeth Gaskell's novel Ruth expanded on the theme of exploitation of seamstresses and the suffering caused by extravagant demands of selfish or ignorant customers; the subject was treated in the United States in Charles Burdett's 1850 The Elliott Family or the Trial of New York Seamstresses.

Stewart, Margaret, and Hunter, Leslie. The Needle Is Threaded: The History of an Industry. London: Heinemann/Newman Neame, 1964.