Just as the needle marked the beginning of humanity's first technological and aesthetic efflorescence, the sewing machine affected not just tailoring and dressmaking but manufacturing technology, intellectual property management, marketing, advertising, consumer finance, world commerce, and technological leadership. Even more fundamentally, and largely unexpectedly, the sewing machine became a new kind of product-it was both commercial and domestic, and, in appearance, both industrial and ornamental. The continuing development of machine sewing is in part the story of the changing balance between household and factory.

Like the personal computer over 125 years later, early commercially successful sewing machines combined a number of separate innovations into a new system for which an immense latent demand existed. In fact, the crucial single innovation, made by Elias Howe Jr. in his patent of 1846, was a system based on a radically new curved, grooved needle with an eye at the point end. Instead of making an easily unraveled chain stitch that emulated manual work, it engaged thread from the needle with another in a moving shuttle to create a stronger lock stitch. It was the first machine with a significant advantage in speed over hand sewing, but was limited to straight stitching and could complete only a limited length of material at a time. Another inventor, John Bachelder, remedied the Howe machine's drawbacks with an improved design patented in 1849, allowing continuous sewing of material with a needle moving up and down on a horizontal table. Isaac Merritt Singer made a series of other improvements in 1850 and 1851, making curved stitching possible and replacing the hand wheel with a treadle.

While no single inventor controlled all the patents needed to make commercially successful equipment, Singer and the others were able to settle the claims of Howe and to include his original patent in a pool. For a substantial fixed fee per machine, partly distributed by the corporation to its patent holders, any manufacturer could produce sewing machines without infringement.

The American setting was essential for the sewing machine's success in the 1850s. A French tailor, Barthélemy Thimonnier, had secured French government support in the 1830s for establishment of a firm using his wooden-framed sewing machines to produce military uniforms. A crowd of journeyman tailors had wrecked them as a threat to their livelihoods. In the United States of the 1850s there was no comparably powerful and politically active craft organization. To the contrary, America was already leading the world in production of ready-made garments; even before the Civil War, companies were using standardized measurements and patterns to remove the most skilled and best-paid parts of tailoring from the manufacturing process. Jacksonian Americans hoped ready-made clothing of mechanically spun and woven fabrics would limit visible class distinctions in public life, closing the gap between the custom tailoring of middle-and upper-class men and the rough workman's clothing called slops. In 1835, one New York firm was advertising for three hundred male and five hundred female tailors, and another for twelve hundred "plain sewers." 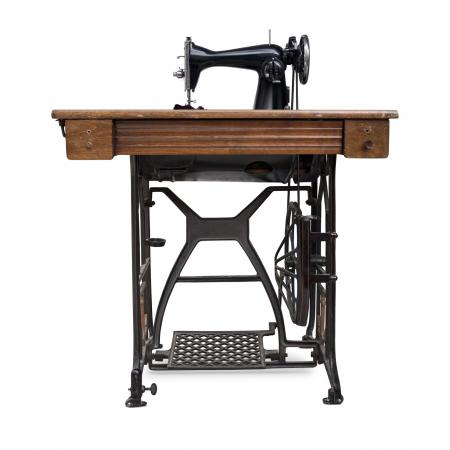 Such manufacturers embraced mechanical sewing rapidly, as it increased productivity by up to 500 percent. From 1853 to 1860 the number of machines sold in the United States rose from 1,609 to 31,105, reaching 353,592 by 1875. But domestic applications soon overtook industrial uses. Isaac Singer, a former actor, pioneered a national and international sales campaign to introduce his machine into the home. Singer's associate, the attorney Edward Clark, developed the first national sales organization and the first widely accepted hire-purchase plan, successful even among buyers who could have paid cash. Since women of all social classes were expected to sew and repair women's and children's clothing, it appeared to offer a great savings in time. Its high price actually helped make it a prestigious purchase, usually on prominent display-one of the first manifestations of an industrial aesthetic in the home. (The Singer machine contained over one hundred pounds of cast iron, among other materials.) Yet working-class women who could afford payments also saw it as a means of self-sufficiency; for young women it was an attractive alternative to domestic service.

Clark and Singer established luxurious sales rooms for displaying machines and their use, spent millions in advertising, and established global sales and service organizations, the first of their kind. Economic historians have suggested that the vigorous marketing by Singer and other firms spread information that, in turn, stimulated new improvements of the machine in a virtuous circle. They have also noted that the Singer Company continued to use conservative, European-style craft production systems after its rivals had adopted interchangeable parts, making the change only when sales volume demanded it. Despite this delay, the sewing machine industry became a new foundation of productive techniques that helped U.S. industry challenge Britain's dominance in mechanical engineering. 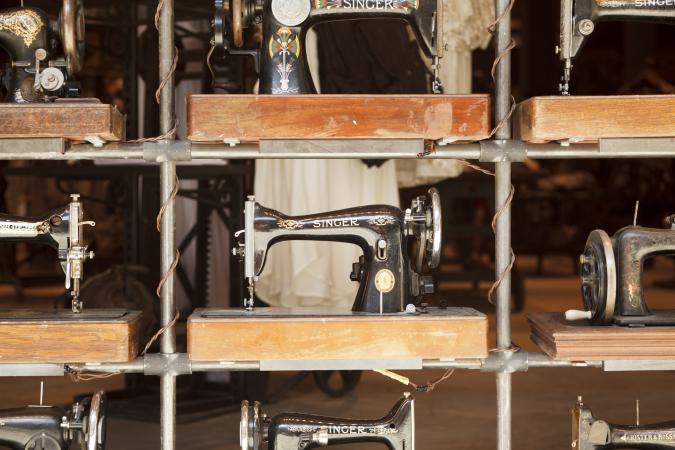 The sewing machine reached maturity relatively quickly. The 1865 Singer New Family machine was sold into the twentieth century, and some home sewers still swear by the robustness of related surviving models. After the original patents expired in 1877 and the combination of patent holders was dissolved, prices continued to drop. Sears, Roebuck and other new merchandisers aggressively promoted well-built and relatively inexpensive private-brand machines. While this strategy helped maintain real-dollar sales and widespread home sewing machine use, it also hastened the decline of the sewing machine's status. Meanwhile technicians and inventors who worked in sewing machine production were turning design and production skills to new generations of devices, including typewriters (which offered similar challenges in precise alignment) and phonographs (which also used rotary motion and the needle).

Motor-powered machines began to appear in the 1910s, but until the 1930s many potential customers out-side major cities still lacked home electricity. The great change in the early twentieth century was in attitudes toward home sewing and the machine. The increased availability, improved styling, and higher quality of ready-made women's clothing turned the sewing machine from a time-saver to a money-saver. Homemade clothing began to be stigmatized. In the 1920s, domestic management shifted from making to selecting things. Electrification of factory sewing machines reinforced this trend by increasing productivity and reducing the prices of ready-made clothing. And the expense of materials wasted by mistakes discouraged neophyte home sewers. Ironically, electrification was welcome in part because it made it easier to hide the machine on a closet shelf between uses.

Expanding career opportunities for women after World War II made the domestic sewing machine a niche appliance, sometimes used as a fallback during price inflation and for mending. With the rise of sold-state control, using programmable integrated circuits instead of or in addition to mechanical controls like cams and with the globalization of the apparel and footwear industries, sewing machine production moved in the later twentieth century first to Japan and then to China. The division of labor in industry encouraged the multiplication of special-purpose machines, of which Japanese firms in the 1990s offered over one thousand models. High-speed production is posing a new range of technical challenges; needles, threads, and fabrics must be designed to work with advanced equipment. (Some economists believe that stronger thread for machine sewing was one of the twentieth century's most productive innovations.)

In home sewing, computerization has encouraged not output but creative control, in that a new variety of stitches and functions are available. High-end home machines can exceed the cost of some industrial machines in price. The attraction is no longer saving time or money, but creating apparel and home furnishings with designs unavailable in the marketplace. In the global economy pioneered by the sewing machine, household and industrial sewing have parted ways again.

Hounshell, David. From the American System to Mass Production, 1800-1932: The Development of Manufacturing Technology in the United States. Baltimore: Johns Hopkins University Press, 1984.