"Supermodel" ranks with "genius" and "original" as one of the most-abused terms in the fashion lexicon. Indeed, it has been so overused that by the late 1990s, when the Supermodel phenomenon (personified by larger-than-life mannequins such as Cindy Crawford, Claudia Schiffer, Naomi Campbell, and Christy Turlington) had long-since peaked and passed, the word had lost almost all meaning, becoming a generic gossip-column descriptive promiscuously pinned on almost any fashion model with, or in some cases, merely wanting, a public profile.

Early Use of the Term

Though many claimed to have coined the term, notably the 1970s model Janice Dickinson, the first recorded use of the word was in a 1948 book, So You Want to Be a Model! by a small-time model agent named Clyde Matthew Dessner. It came into more general usage in 1981, when New York magazine published "The Spoiled Supermodels," in which Anthony Haden-Guest, the incisive British journalist, chronicled the myriad misbehaviors of highly paid models and photographers in the cocaine-clouded world of post-Studio-54 New York City.

In pure terms, there had been supermodels long before that-at least, if supermodels are defined, as they properly should be, as mannequins whose renown and activities stretch beyond the bubble-world of fashion.

Supermodels don't just look the part-they have to live it. The earliest one was probably Anita Colby, who began her career in the 1930s as a model with the Conover Agency in New York, but was soon lured to Hollywood where, in 1944, she served as ringleader of a gang of models who co-starred with Rita Hayworth in the big-budget film, Cover Girl. Colby's success in publicizing the film-she arranged an average three magazine cover stories per cover girl-won her a job as image consultant for the great producer, David O. Selznick, an appearance on the cover of Time magazine, a recurring spot on the Today Show (where a young Barbara Walters wrote her scripts), and marriage proposals from Clark Gable and James Stewart.

The 1940s and 1950s were dominated by the super-model sisters Dorian Leigh and Suzy Parker. Leigh, the older sister, lived large; she had affairs with Harry Bela-fonte, Irving Penn, and the Marquis de Portago, and a two-day marriage to drummer Buddy Rich; she founded two modeling agencies, and gave Martha Stewart her first job when she owned a catering business. Sister Suzy Parker, best known as photographer Richard Avedon's muse, was also a gossip column staple and a Hollywood star before she settled into domesticity as the wife of actor Bradford Dillman.

Rise of the Britons

The next generation of supermodels was led by Britons Jean Shrimpton and Twiggy. Shrimpton had the good fortune to hook up with David Bailey, the best of a batch of trendsetting British photographers known as the Terrible Trio, just as the 1960s were getting started. She was a pouty-lipped, saucer-eyed, eighteen-year-old modeling school graduate; he was a twenty-three-yearold East End rake-in-the-making. Together, they kicked off the Youthquake before he went on to marry actress Catherine Deneuve, and she to an affair with actor Terence Stamp and an appearance on the cover of Newsweek.

A year later, The Shrimp was replaced by a Twig, or rather Leslie Hornby, a.k.a Twiggy, who catapulted to worldwide fame (and another Newsweek cover) with the help of a hairdresser at Vidal Sassoon who called himself Justin de Villeneuve. Twiggy was the first model to gain a profile outside fashion before making the jump into film. But she was also a comet-by 1968, she'd burned out. In 1971, she made a comeback as an actress, but despite some success, never again saw super-stardom. "I used to be a thing," she said in 1993. "I am a person now" (Gross, p. 183).

By then, of course, many other women had donned the rainments of the supermodel, only to be disrobed by a public eager for the next new…thing. Thanks to a lift from Sports Illustrated's swimsuit issue, Cheryl Tiegs revived the poster girl, and the supermodel phenomenon, when she crossed over from fashion into the worlds of the pinup and then the eponymous product marketer-a trajectory many wanna-be "supes" would follow thereafter. Hers wasn't the only path to stardom. Janice Dickinson made it by doffing her clothes at every opportunity, Iman by hooking up with the socialite photographer Peter Beard, who billed her as fresh out of the African bush, even though she was the educated daughter of a diplomat. 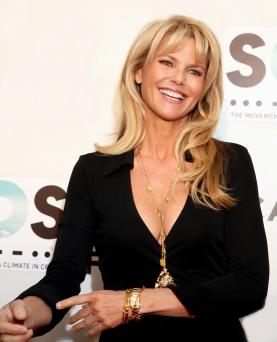 Christie Brinkley parlayed her moment into several decades, and in the early 2000s is a star-billed political activist. Patti Hansen and Jerry Hall married Rolling Stones and became celebrities through sexual association. But that path to staying power didn't always lead to the same destination. After Elaine Irwin married rocker John Mellen-camp, she fell from view, apparently content to be a wife and mother.

Irwin was one of ten supermodels photographed for Harper's Bazaar by Patrick Demarchelier in 1992, the peak of Supermodeldom. With her in the picture were Christy Turlington, Cindy Crawford, Naomi Campbell, Linda Evangelista, Yasmeen Ghauri, Karen Mulder, Claudia Schiffer, Niki Taylor, and Tatjana Patitz. Along with Helena Christensen, Stephanie Seymour, and later, Kate Moss, this baker's dozen formed the core of the real Supermodel Corps, aided and abetted by image-conscious designers such as Karl Lagerfeld, Calvin Klein, and Gianni Versace, photographers such as Patrick Demarchelier, Peter Lindberg, and Steven Meisel, and the Parisian model agent Gerald Marie. All of their behind-the-scenes machinations helped create the supermodel moment.

Each, in his own way, had seen a window of opportunity open in 1987, when fashion's excesses of the preceding ten years, followed hard by a stock-market crash on Wall Street, and a worldwide recession, put an end to the designer decade that had been launched along with Calvin Klein jeans back in the pre-super 1970s. When the pouf dress-symbol of those heady days- went pop, the air went out of fashion and designers lost their way, just at the moment when the mass market seemed to have discovered them. The supermodels were used as a placeholder, a distraction, a way to keep the attention of the audience focused on fashion, while behind the scenes, the designers scurried around looking for a new message better suited to their times and their greatly expanded audience. Only problem was the supes soon became the tail that wagged the dog of fashion.

But truth be told, they couldn't sustain their "suzerainity." By 1995, the public had tired of the supes and were ready for something, anything, else. The fashion business was tired of them, too. They were too demanding, too expensive (Evangelista had famously remarked that she wouldn't get out of bed for less than $10,000; by 1995, that price had risen to $25,000), too overexposed. The shelf life of models is generally seven years. The supermodels were pert nose up against their use-by date. "I won't use her," as designer Todd Oldham said of Campbell, then the worst behaved of the lot (Gross, p. 438).

In 1996, just in time, a new model movement came along. The small, unassuming girls who were newly in favor were called waifs, and they dressed in a style with the unappealing name, grunge. Unfortunately, although it did take to Kate Moss, the last of the era's supermodels, the public didn't go along with the rest of the trend, and soon enough a new crop of larger-than-life models appeared. But fashion had been downsized-and they were too. Amber Valletta and Shalom Harlow made a run for the top but fell short. In their wake came other girls (for that's what the business calls them, even though they are its representation of womanhood), but few supes. Had you asked a boy tossing a football in Indiana to name the supermodels of 2003, he would probably say Gisele Bundchen and Heidi Klum (both stars of the ad campaigns run by Victoria's Secret, which replaced Sports Illustrated's bathing suit issue as the source of all fashion knowledge for American men)…and then he would pause, searching for more names but not finding them.

Which means that as surely as long hems follow short ones, the time is probably nigh for the return of the supermodel.

Leigh, Dorian, with Laura Hobe. The Girl Who Had Everything: The Story of "The Fire and Ice Girl." Garden City, N.Y.: Doubleday, 1980.