Sweatshops are workplaces run by unscrupulous employers who pay low wages to workers for long hours under unsafe and unhealthy conditions. For example, in a clothing sweatshop in California in the early 2000s, Asian women sewed for ten to twelve hours per day, six or seven days per week, in a dim and unventilated factory loft where the windows were sealed and the emergency doors locked. The workers had no pension or health-care benefits and were paid at a piece rate that fell far below the legal minimum wage. When the company went bankrupt, the owner sold off the inventory, locked out the workers without paying them, moved his machines in the middle of the night to another factory, and reopened under a different name.

The term "sweatshop" is derived from the "sweating system" of production and its use of "sweated labor." At the heart of the sweating system are the contractors. A large company distributes its production to small contractors who profit from the difference between what they charge the company and what they spend on production. The work is low skilled and labor intensive, so the contractors do best when their workers are paid the least. Workers employed under these conditions are said to be doing sweated labor.

Sweatshops are often used in the clothing industry because it is easy to separate higher and lower skilled jobs and contract out the lower skilled ones. Clothing companies can do their own designing, marketing, and cutting, and contract out sewing and finishing work. New contractors can start up easily; all they need is a few sewing machines in a rented apartment or factory loft located in a neighborhood where workers can be recruited.

Sweatshops make the most fashion-oriented clothing-women's and girls'-because production has to be flexible, change quickly, and done in small batches. In less style-sensitive sectors-men's and boys' wear, hosiery, and knit products-there is less change and longer production runs, and clothing can be made competitively in large factories using advanced technology. 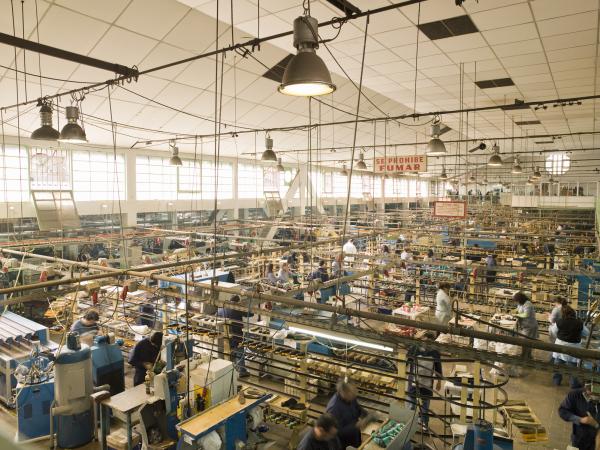 Since their earliest days, sweatshops have relied on immigrant labor, usually women, who were desperate for work under any pay and conditions. Sweatshops in New York City, for example, opened in Chinatown, the mostly Jewish Lower East Side, and Hispanic neighborhoods in the boroughs. Sweatshops in Seattle are near neighborhoods of Asian immigrants.

Evolution in London and Paris

The evolution of sweatshops in London and Paris- two early and major centers of the garment industry- followed the pattern in New York City. First, garment manufacturing was localized in a few districts: the Sentier of Paris and the Hackney, Haringey, Islington, the Tower Hamlets, and Westminster boroughs of London. Second, the sweatshops employed mostly immigrants, at first men but then primarily women, who had few job alternatives. The source of immigrant workers changed over time. During the late nineteenth and twentieth century, most workers in the garment sweatshops of Paris were Germans and Belgians, then Polish and Russian Jews and, into the 2000s, Yugoslavs, Turks, Southeast Asians, Chinese and North African Jews. Eastern European Jews initially worked in London sweatshops, but most of these workers were replaced by Cypriots and Bengali immigrants. Also, sweatshop conditions in the two cities were the result of roughly similar forces; in the nineteenth century, production shifted to lower-grade, ready-made clothing that could be made by less skilled workers; skill requirements further declined with the introduction of the sewing machine and the separation of cutting and less skilled sewing work; frequent style changes, particularly in ready-made women's wear, led to production in small lots and lower entry barriers to new entrepreneurs who sought contracts for sewing; and, as contractors competed among themselves, they tried to lower labor costs by reducing workers' pay, increasing hours, and allowing working conditions to deteriorate.

In developing countries, clothing sweatshops tend to be widely dispersed geographically rather than concentrated in a few districts of major cities, and they often operate alongside sweatshops, some of which are very large, that produce toys, shoes (primarily athletic shoes), carpets, and athletic equipment (particularly baseballs and soccer balls), among other goods. Sweatshops of all types tend to have child labor, forced unpaid overtime, and widespread violations of workers' freedom of association (i.e., the right to unionize). The underlying cause of sweat-shops in developing nations-whether in China, Southeast Asia, the Caribbean or India and Bangladesh-is the intense cost-cutting done by contractors who compete among themselves for orders from larger contractors, major manufacturers, and retailers.

Clothing was not always produced with the sweating system. Throughout much of the nineteenth century, seamstresses made clothing by working long hours at home for low pay. They sewed precut fabric to make inexpensive clothes. Around the 1880s, clothing work shifted to contract shops that opened in the apartments of the recently arrived immigrants or in small, unsafe factories. 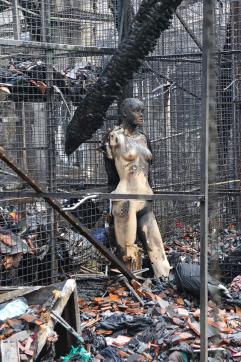 The spread of sweatshops was reversed in the United States in the years following a horrific fire in 1911 that destroyed the Triangle Shirtwaist Company, a women's blouse manufacturer near Washington Square in New York City. The company employed five hundred workers in notoriously poor conditions. One hundred and forty-six workers, mostly young Jewish and Italian women, perished in the fire; many jumped out windows to their deaths because the building's emergency exits were locked. The Triangle fire made the public acutely aware of conditions in the clothing industry and led to pressure for closer regulation. The number of sweatshops gradually declined as unions organized and negotiated improved wages and conditions and as government regulations were stiffened (particularly under the 1938 Fair Labor Standards Act, which imposed a minimum wage and required overtime pay for work of more than forty hours per week).

Unionization and government regulation never completely eliminated clothing sweatshops, and many continued on the edges of the industry; small sweatshops were difficult to locate and could easily close and move to avoid union organizers and government inspectors. In the 1960s, sweatshops began to reappear in large numbers among the growing labor force of immigrants, and by the 1980s sweatshops were again "business as usual." In the 1990s, atrocious conditions at a sweatshop once again shocked the public.

In 1995, police raided a clandestine sweatshop in El Monte, California (outside Los Angeles), where seventy-two illegal Thai immigrants were sewing clothing in near slavery in a locked and gated apartment complex. They sewed for up to seventeen hours per day and earned about sixty cents per hour. When they were not working, they slept ten to a room. The El Monte raid showed an unsuspecting public that sweatshop owners continued to prey on vulnerable immigrants and were ignoring the toughened workplace regulations. Under intense public pressure, the federal government worked with unions, industry representatives, and human rights organizations to attack the sweatshop problem. Large companies pledged to learn more about their contractors and avoid sweat-shops. Congress proposed legislation that would make clothing manufacturers responsible for the conditions at their contractors. College students formed coalitions with labor unions and human rights organizations to organize consumer boycotts against clothing made in sweatshops. Despite these efforts, the old sweatshops continued and many new ones were opened.

Resurgence in the United States

In the early twenty-first century, about a third of garment manufacturers in the United States operate without licenses, keep no records, pay in cash, and pay no overtime. In New York City, about half of the garment manufacturers could be considered sweatshops because they repeatedly violate pay and workplace regulations. In Los Angeles, the nation's new sweatshop center, around three-quarters of the clothing contractors pay less than the minimum wage and regularly violate health regulations.

The resurgence of sweatshops in the United States is a byproduct of globalization-the lowering of trade barriers throughout the world-and the widespread use of sweatshops to make garments in developing countries. American clothing companies must compete against producers elsewhere that can hire from a nearly endless supply of cheap labor.

Race to the Bottom

In the clothing industry, one sees a classic case of the "race to the bottom" that can come with unrestrained globalization. As trade barriers are reduced, clothing retailers face intensive competitive pressure and, squeezed for profits, they demand cheaper goods from manufacturers. The manufacturers respond by paying less to contractors, and the contractors lower their piece rates and spend less money maintaining working conditions. Quite often, the contractors move abroad because the "race to the bottom" also happens worldwide. Developing countries outbid each other with concessions (for example, wages are set below the legal minimum, child labor and unhealthy work conditions are overlooked) to attract foreign investors.

The fight against sweatshops is never a simple matter; there are mixed motives and unexpected outcomes. For example, unions object to sweatshops because they are genuinely concerned about the welfare of sweated labor, but they also want to protect their own members' jobs from low-wage competition even if this means ending the jobs of the working poor in other countries.

Also, sweatshops can be evaluated from moral and economic perspectives. Morally, it is easy to declare sweatshops unacceptable because they exploit and endanger workers. But from an economic perspective, many now argue that without sweatshops developing countries might not be able to compete with industrialized countries and achieve export growth. Working in a sweatshop may be the only alternative to subsistence farming, casual labor, prostitution, and unemployment. At least most sweatshops in other countries, it is argued, pay their workers above the poverty level and provide jobs for women who are otherwise shut out of manufacturing. And American consumers have greater purchasing power and a higher standard of living because of the availability of inexpensive imports.

The intense low-cost competition spurred by the opening of world markets is creating a resurgence of sweatshops in the United States. The response has been a large and energetic anti-sweatshop movement aimed at greater unionization, better government regulation, and consumer boycotts against goods produced by sweated labor. But despite the historical rise and fall and rise again of sweatshops in the clothing industry, their fundamental cause remains the same. The sweating system continues because contractors can profit by offering low wages and harsh conditions to workers in the United States and abroad who have no alternatives.

Piore, Michael. "The Economics of the Sweatshop." In No Sweat: Fashion, Free Trade, and the Rights of Garment Workers. Edited by Andrew Ross. New York: Verso, 1997, pp. 135-142. A brief, well-written review of the economic factors behind the operation of sweatshops in the garment industry.

Rosen, Ellen Israel. Making Sweatshops: The Globalization of the U.S. Apparel Industry. Berkeley: University of California Press, 2002. A comprehensive study of the impact of globalization on sweatshops in the American garment industry, with detailed analyses of their historical development and present condition.

Stein, Leon, ed. Out of the Sweatshop: The Struggle for Industrial Democracy. New York: Quadrangle, 1977. A collection of classic essays, news stories, and workers' firsthand accounts of sweatshops with particularly strong sections on immigrants, early sweatshops, and union organizing and strikes.

Von Drehle, David. Triangle: The Fire that Changed America. New York: Atlantic Monthly Press, 2003. A vivid and informative account of the 1911 Triangle fire-the deadliest workplace fire in American history and an early turning point in the evolution of sweatshops and the government regulation of work.