Prior to the mid-eighteenth century, textile products were a main household manufacture, both for domestic use and on a commercial basis. Spun yarn, woven cloth, knitted stockings, and lace were the main products (Abbott 1910). Cotton, wool, flax, and hemp were the raw materials used by the women and girls in the household to make products to meet family needs; commercial weaving was often done at home by men.

Transition from the household to the shop system was slow, occurring at different times in different countries and regions. Tryon (1917) describes an "itinerant-supplementary stage" that preceded the shop system. During this stage, an itinerant worker (for example, a weaver), could be hired to help complete the weaving process in the home. Supplementary businesses provided operations that were too difficult to do in the home. These included operations executed on the raw materials or semifinished products of the household, such as fulling, carding, dyeing, and bleaching.

During the latter part of the eighteenth century, spinning and weaving began to be mechanized, beginning in England, and "manufactories" began to take the place of household production. Mechanical spinning was much more efficient than spinning with a spinning wheel, and so factory production quickly predominated. Weaving still was often done at home, with materials being furnished by a factor or agent and the finished products returned to the manufactory. Workers were paid for each piece they had completed. 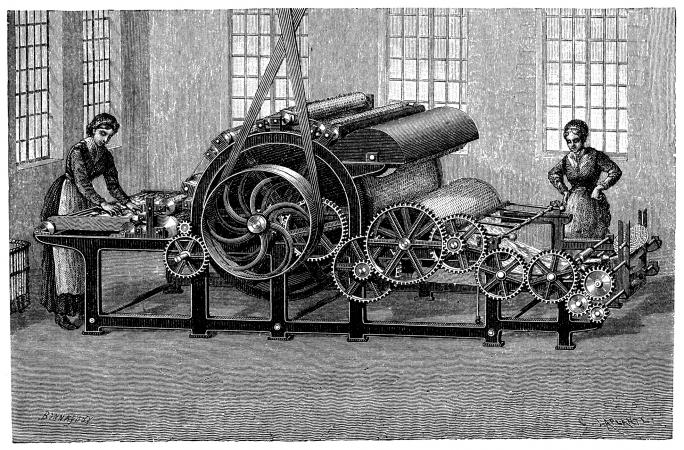 In the United States, mechanized spinning quickly caught on in New England, which had excellent sources of waterpower for the purpose. Power looms for weaving were introduced in 1814 in Waltham, Massachusetts. This was the first factory in America to integrate spinning and weaving under one roof. The displacement of household manufacture brought women and children into the factory to execute tasks they had always done at home, but with different equipment and on a much larger scale.

Effect of Relocation on Workers 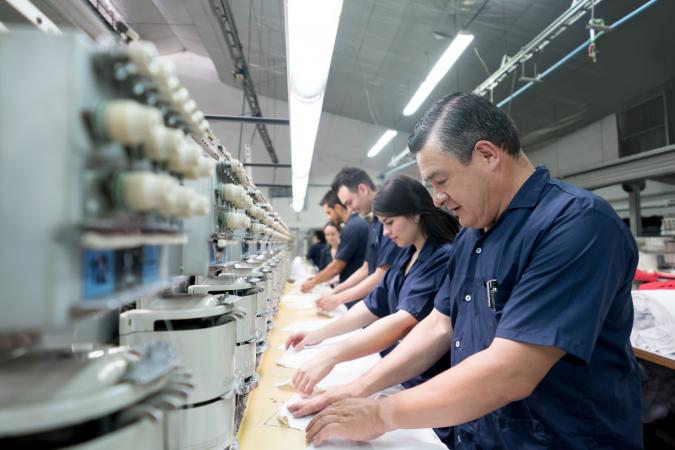 While the number of textile employees declined between 1950 and 2002, the percentage of women and blacks also declined, while the percentage of Hispanics increased. The overall decrease in the number of workers has been accompanied by a decline in the American production of textiles in the post-World War II period, due to foreign competition and an influx of imports, particularly from Asian countries. Textile production and employment in the countries of Western Europe has seen similar declines.

Textile production and distribution is no longer a process of a single nation, but of a world economy. Increased foreign competition and trade exist among many textile-producing nations. To increase production and to remain competitive, textile manufacturers have invested in new machinery and techniques of production that increase the productivity of labor. This means that fewer workers are needed to "tend" to a larger number of machines. Corporations have merged, joint ventures with foreign companies have occurred, new plants have been constructed in foreign countries, and American-owned companies have increasingly shifted operations to offshore manufacturing. All of this means fewer jobs domestically, but increased employment abroad. This process is a continuation of the shift of textile jobs from high-wage to low-wage environments that was seen already in the movement of textile production from New England to the American South in the middle decades of the twentieth century.

Textile production has shifted to a number of developing countries, including China, India, Pakistan, Bulgaria, and Turkey. Because women are lower cost employees worldwide than men, textile manufacturers in these countries typically employ more than 50 percent females in textile production. Some Asian countries, including Japan and Korea, that once offered low-wage employment in the textile industry, have also seen a flight of textile production to countries with even lower wages overseas. In 2004 leading low-wage countries include Sri Lanka, Indonesia, and Bangladesh (Industrial United Nations Development Organization, 2003).

Although textile manufacturers argue that free-trade practices (such as the abandonment of trade quotas to restrain imports into the United States from China and the North American Free Trade Agreement) have been the cause of mill bankruptcies and closings and job losses in the United States (Nesbitt, 2003), many economists point out that tariffs, quotas, and other protectionist measures are generally ineffective in maintaining employment in declining industries, and result in higher prices for consumers. Only factories offering some specific comparative advantage (for example, techno-textile production, on-demand specialty textile production, extremely high labor productivity) are likely to survive in high-wage environments in the era of globalization. The portability of the textile industry (whole factories can be dismantled in one country and reassembled in another, lower-wage one) and the relatively unskilled nature of textile work means that production of basic textiles will continue to flow to low-wage environments. An important contemporary challenge is to protect textile workers (largely female, poor, young, and vulnerable) from exploitation, industrial hazards, and other negative effects of employment in an industry that has seldom seen worker protection as a high priority.

Bureau of the Census, Department of Commerce and Labor. Statistics of Women at Work. Washington, D.C.: Government Printing Office, 1907.

Rowan, Richard L. The Negro in the Textile Industry. Wharton School of Finance and Commerce, Report No. 20. Philadelphia: University of Pennsylvania Press, 1970.