The history of mechanization in the weaving industry is replete with stories of inventors whose ideas were untimely or impractical. The perseverance of inventors is a testimony to the importance of cloth in our culture and of the lucrative nature of the business. Mechanization of the weaving process began in earnest in the eighteenth century. Prior to developments in automation, one weaver was needed to operate one loom, and an assistant was necessary if a complex pattern was being woven. There were a few developments prior to 1700, but none of significance or permanent influence. One problem that inventors faced was violent opposition from textile workers who resented any innovations that would speed an individual's production capacity and therefore reduce the numbers of weavers needed. Improvements in the speed of weaving during the eighteenth century were given impetus by the invention of spinning machinery for the production of yarn necessary for weaving. Until mechanical spinning came into use, the output of three to four spinners was necessary to keep one weaver fully employed. Acceptance of advances in loom technology was also aided by continuing improvements in spinning and cloth finishing technologies. The first significant move toward automated weaving occurred when John Kay invented the flying shuttle in 1733. The flying shuttle was set in motion by the weaver pulling a cord or handle that propelled the shuttle across the width of the textile. Not only did this speed weaving by as much as four times, it also allowed a weaver to produce cloth wider than his arm's reach.

In 1785, a clergyman named Edmund Cartwright patented the first power loom. It was initially powered by an oxen, then by the new steam engine patented by James Watt in 1769. Cartwright's loom was slow to be accepted, but by the 1830s versions of his loom enabled one weaver and an assistant to operate four looms simultaneously. This machine was limited to producing plain textiles.

The automation of patterned fabric production began with the 1804 invention by Joseph Marie Jacquard. His so-called Jacquard mechanism could be mounted on any loom and controlled the lifting of the warp yarns that create the fabric's pattern. Previously, complex patterns had to be set up in advance on a loom and required an assistant to operate, but the Jacquard attachment allowed one weaver to control the shuttle and the pattern mechanism alone. Punched cards controlled the lift of the warp pattern yarns and a design could be changed very quickly by changing the punch cards that correspond to a particular design. This basic system remains in use in the early twenty-first century. 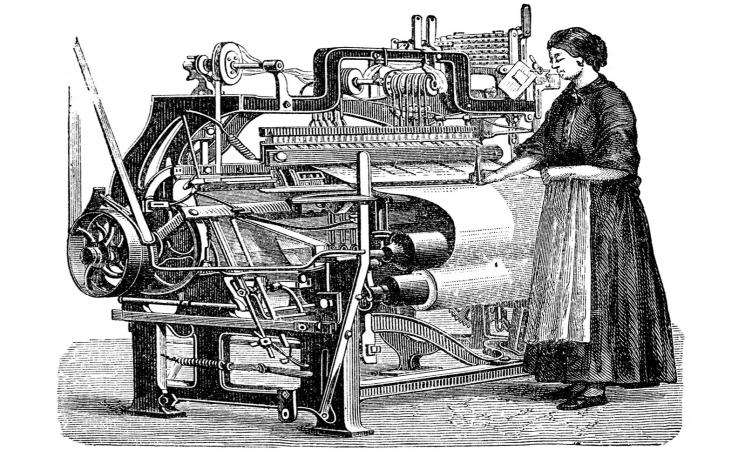 In 1835 the first automatic shuttle change machine enabled weft yarns of different colors to be inserted automatically in the weaving. 1895 saw the invention of the automatic pirn (weft supply) change in the shuttle, introduced by J. H. Northrop. Not until the 1950s did automatic weft winding directly on the weaving machine become commercially viable. It was introduced by the Leesona Company and known as the "Unifil" system.

Shuttleless looms appeared in the mid-twentieth century and employed various systems: grippers, rapier, and jets of water or air. Gripper machines use a small projectile that picks up a weft from a supply on the side and carries it to the other side; rapier machines use a long thin rod which travels from one side and grabs a weft which it pulls across as it returns (there are single and double rapier looms; the double rapiers meet in the center and pass off the weft thread); jet looms use a jet of air or water to propel the weft from side to side. Jet looms have the advantage of being particularly fast and can weave widths up to 85 inches. The rapier loom has the oldest history as the concept appears in a patent of 1678; the modern rapier loom was launched in 1963 by Dornier of Germany. A forerunner of the modern air jet loom first appeared in England in the 1860s, but the idea was finally commercially successful in the 1950s, introduced by Max Paabo of Sweden. The projectile (gripper) loom was invented in Switzerland by the Sulzer Brothers in 1924 but did not come into commercial use until 1953.

Fabrics from shuttleless looms do not have a selvage, as the weft is not a continuous yarn. The edges can be sealed with heat or resin. Until recently, these machines were limited to high volume weaving. Shuttle looms are still used for weaving basic constructions in low-wage economies and for specialist fabrics, which still comprise a large part of the market.

In the 1970s, the multiphase loom, in which all the actions of the loom take place simultaneously, was introduced. There are two types of multiphase looms: wave shed looms, in which the shed changes across the width of the textile as the weft travels, and parallel shedding, in which multiple sheds are formed along the length of the warp. One of the latest multiphase looms can produce 1.5 yards of fabric in one minute. In the early 1980s, computer-aided design and manufacture (CAD/CAM) became available and the design process, which could take weeks or months could be shortened drastically to as little as a twenty-four-hour period, if necessary. Computer generated design samples can also replace actual woven samples and can therefore be produced almost immediately and transmitted electronically to any point on the globe. This technology has also enabled designers to become partners in the manufacturing process, as changes can be introduced "virtually" without the cost of loom set-up and production time. Computers can also monitor the weaving process itself and can detect and automatically correct numerous mistakes.

Currently, designers have the possibility of working directly on systems where designs created on a computer screen are transferred directly to the controls of a computerized loom with the corresponding technology. The reaction to CAD/CAM has been mixed, as the ease of technology can lead to a disintegration of design. 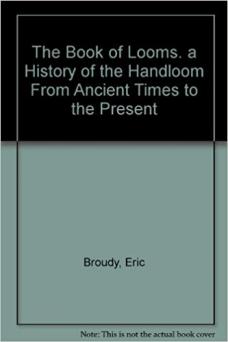 The Book of Looms

Broudy, Eric. The Book of Looms: A History of the Handloom from Ancient Times to the Present. New York: Van Nostrand Company, 1979.