Its own motto is "the retailer's daily newspaper," but within the fashion industry, Women's Wear Daily is widely referred to as "the bible of the business." It is far more than just a trade publication serving an industry. With its unique mix of hard business, financial stories, society gossip, and biting fashion reviews, WWD (as it is commonly known) is a high-impact cultural voice.

Women's Wear first appeared as a supplement to the 21 May 1910 edition of the Daily Trade Record, a broad-sheet that tracked the burgeoning, if rather dry, textiles imports and apparel manufacturing businesses. Both were products of Fairchild Publications, started by Edmund Wade (E.W.) Fairchild and his brother Louis E. Fairchild But with department stores booming and women's fashion becoming a business unto itself, it seemed obvious to the Fairchilds that the Women's Wear supplement could succeed as a stand-alone publication. "There is probably no other line of human endeavor in which there is so much change as in the product that womankind wears," opined an editorial in one of the first editions. Women's Wear became a daily on 15 July 1910, publishing every day but Sunday and selling for 15 cents. 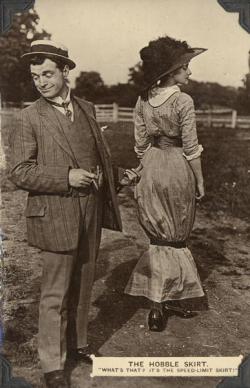 The next year, E. W. Fairchild opened a Paris bureau, since that city's houses basically dictated the course of fashion; correspondents would wire stories about the trends in French fashion, such as the "universally repudiated hobble skirt," or Paul Poiret's scandalous Turkish trousers of 1913. In 1912, one of the paper's Paris correspondents, Edith L. Rosenbaum, happened to be on the maiden voyage of the Titanic; she survived and gave Women's Wear a version of the tragedy that noted which prominent retailers were on the ship (Isidore Straus, a founder of Abraham & Straus, perished with his wife) and what some of the survivors wore in the lifeboats ("Lady Duff-Gordon made her escape in a very charming lavender bathrobe").

The paper by then was based at 822 Broadway and had three Linotype machines dedicated to rolling out its copies. In 1927, Fairchild added the "Daily" to its name. Although the paper acknowledged world events, high society, Hollywood movies, and the like, its content was always within the context of the fashion industry. Coverage was always focused on business, not personalities. WWD adopted the mind-set of its readers slavishly following Paris designers like Christian Dior, Cristóbal Balenciaga, and Coco Chanel while essentially ignoring homegrown talents. It was first and foremost a trade paper, with a fairly narrow, albeit loyal and influential readership.

The second generation took over in 1948 when Louis E. Fairchild passed the president's title to his nephew, Louis W. But it wasn't until the charismatic, confident, worldly Princeton-educated John B. Fairchild (son of Louis W.) arrived in 1960, after a stint in the Paris office, that WWD shook off its old identity as a niche-market trade paper and became a cultural chronicler crackling with opinion. "It was as if a tornado hit 7 East 12th Street," recalled fashion journalist Etta Froio, then just starting her WWD career as a market editor. "In just a few weeks, he swept away every trace of the musty, stodgy newspaper we had known and set out to create a new era of style and status."

During his time in Paris, Fairchild had decided that the most interesting thing about fashion wasn't the clothes as much as the people who made and wore them. He began establishing the new tone of WWD there, as he befriended Coco Chanel, Christian Dior, Yves Saint Laurent, Pierre Bergé, and Pierre Cardin, among others. Once back in New York, he expanded that vision to include the entire industry. Before John B., WWD had more or less ignored society, except as it pertained to the fashion business. Now, the paper began running on-the-street pictures of chic socialites and interviews with sexy young starlets like Julie Christie, Brigitte Bardot, Vanessa Redgrave, Jane Fonda, and Faye Dunaway. Even counterculture artists, rock stars, and scandalous trends (Andy Warhol, Patti Smith, braless women, the invasion of blue jeans), barely acknowledged in the mainstream press, were investigated and reported on.

Sharing American Design With the World

Fairchild and WWD were instrumental in shifting the world's attention to the merits of American designers, giving their clothes and their personal style more attention than either had ever received. He covered designers such as Halston, Perry Ellis, Oscar de la Renta, and Calvin Klein as much for their social lives as for their collections. "We became fascinated with the personalities of the business executives and the social world," said John B. Fairchild in an interview he gave for WWD's 90th Anniversary edition in 2001. "We were looking for people who made the world tick. That's what it has to be about. All the other coverage then was just endless descriptions of clothes. Nothing to me is more boring than that!" This new approach to fashion was seen in the paper's spin-off magazine W, founded in 1972, which combines edgy coverage of fashion with features such as celebrity interviews and news of society events. 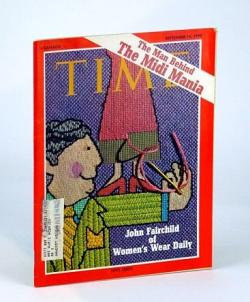 When it came to modern women, Fairchild was particularly obsessed with Jacqueline Kennedy Onassis, sending photographers to wait outside restaurants like La Grenouille and Le Cote Basque where she regularly lunched. He also tracked chic young socialites like Babe Paley, Slim Keith, and CZ Guest. He had his editors write stinging reviews of collections that sometimes infuriated the designers (and occasionally resulted in banishment, which never lasted more than a season) but always delighted the readers. The phrases WWD invented to describe this gilded group have entered the common lexicon: the BPs (beautiful people), Nouvelle Society, Social Cyclones, Walkers (the men who escort Social Cyclones to events), and HotPants, coined in 1970 to describe indecently short shorts. The paper's power grew to the point that its decrees could make a trend or a designer; Time magazine put Fairchild on the cover of its 14 September 1970 issue, labeling him "The Man Behind Midi Mania."

WWD courted controversy, frequently needling designers-its review of Saint Laurent's first collection for Dior said the dresses looked like toothpaste tubes on top of a brioche-and occasionally banishing them from the pages. The most famous example was an estrangement lasting for several years between the paper and Geoffrey Beene. Under John B. Fairchild's editorship, WWD added theater, restaurant and movie reviews, lengthy interviews with celebrities such as Truman Capote, Barbra Streisand, Alfred Hitchcock, and Cassius Clay (pre-Muhammad Ali), and even coverage of the social doings of the White House. The paper's Washington coverage prompted Henry Kissinger to complain that it was giving his active social life too much attention. WWD became a must-read not just for retail and business executives, but also for socialites, public-relations people, talent agents, and even politicians.

A new round of conspicuous consumption in the 1980s fit perfectly with the paper's exuberant coverage of the worlds of fashion and society. WWD gave the Reagan White House ample play. Couture came back, exemplified by Christian Lacroix's bubble dress and the swept-up hairdo, and a new generation of celebrities designed and wore the high-end fashions of the decade. Designer Carolyne Roehm, for example, was married to the wealthy Henry Kravitz, and appeared in the pages of WWD both as a designer and a socialite. The recession of the late 1990s that accompanied the bursting of the dot-com bubble was like a morning-after hangover after the long party of the 1980s and early 1990s. The pages of WWD began to fill with news of liquidations and reorganizations in the fashion industry, and the flight of manufacturing to Asia and the developing world. But the paper remained the must-read publication for everyone connected with the world of fashion.

In 1968, the family decided to sell Fairchild Publications (which had grown to include trade papers dedicated to footwear, home furnishings, even electronics) to Capital Cities Broadcasting, thus becoming part of a publicly owned media empire. In 1986 WWD editors retired their typewriters and moved into the computer age. In 1991, Fairchild Publications moved from its woefully outdated Greenwich Village headquarters to modern offices in a more convenient, if less attractive, neighbor-hood across the street from the Empire State Building. John B. Fairchild retired in 1997 at age 70, naming Patrick McCarthy to be his successor as chairman and editorial director of Fairchild Publications. After a series of media mergers and acquisitions that gave Fairchild Publications various corporate parents in the 1980s and 1990s, the company was acquired in 1999 by Advance Publications Inc., the publishing empire (and publishers of Vogue), owned by the Newhouse family.

Influential Voice in the Fashion World

WWD remains one of the most influential voices in the world of fashion. It is famous as a sort of prep school for fashion journalists. Its alumni are on the masthead of almost every American consumer magazine, from Condé Nast Traveller to Time, although the concentration is heaviest, naturally, at fashion magazines. New York Times theater critic Ben Brantley and Bernadine Morris worked at WWD, as did former CNN correspondent Elsa Klensch, Vogue editor-at-large André Leon Talley, photographer Bill Cunningham, former French Vogue editor Joan Juliet Buck, and even Calvin Klein, who had a brief, unsuccessful stint as a copy boy in 1961.