In 1851, London celebrated the Great Exhibition, showcasing the latest innovations in manufacture and design. Its warm reception by the public and the media confirmed, in many people's eyes, the triumph of increased industrialization and mass production. However, some, who found this way of life increasingly abhorrent, sought an alternative lifestyle by looking to the past.

The Origin of the Aesthetic Dress

Three years earlier, in 1848, the young artists William Holman Hunt, John Everett Millais, and Dante Gabriel Rosetti established the Pre-Raphaelite Brotherhood, taking inspiration from the art of the late medieval and early renaissance periods, which they felt produced a purer and more naturalistic style. As such, dress played an important role in the depiction of the subjects, but with no extant examples, references came from tomb effigies, illustrated manuscripts, and the artist's own inventions. The type of dress that emerged was worn by female members of the artists' circle. 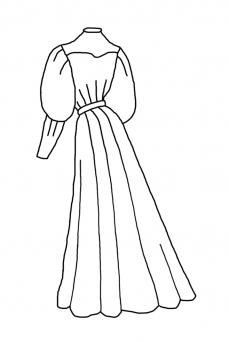 Early styles of aesthetic dress took the form of flowing fabric with soft pleating falling from the neckline. The folds then gently gathered in at the natural, uncorseted waistline and fell into a small train at the back. The sleeves were a defining feature; unlike those of fashionable dress, they were set at the natural shoulder line and often decorated with puffs of fabric at the sleeve head, or gathered down the length of the arm. This enabled freedom of movement, as did the abandonment of the corset, which was felt to offer a more natural figure along the lines of the Venus de Milo, although critics noted "had Venus herself been compelled by a cold climate to drape herself, we have little doubt she would have worn stays, to give her clothes the shape they lacked" (Douglas, pp. 123-124). As such, the style found favor with dress reformers who spoke out against the damaging effects of tightly laced corseting. The two movements became closely allied and by 1890 the Healthy and Artistic Dress Union was established, publishing their ideas in their journal Aglaia.

Color was an all important element of the style, with soft browns, reds, blues, and-a popular choice and most recognizable of them all-a sage green, which was often referred to as "greenery yallery." Aesthetic dress was relatively unadorned, the only decoration appearing in the form of smocking or floral and organically inspired embroidery, with the sunflower and the lily being popular motifs. Accessories were kept to a minimum, with amber beads seen as the most appropriate choice, along with eastern or oriental-inspired pieces. The aesthetic woman herself was epitomized by the red-haired, pale-skinned beauties with their defined jawlines and sorrowful eyes as seen in Rosetti's La Ghirlandata (1877). A photograph of Jane Morris, the wife of the designer William Morris, taken in 1865, depicts her as the perfect embodiment of this ideal. Her untamed hair is loosely tied back, her dress draping in heavy folds.

By the 1870s, the style had really come to the attention of the public. In 1877, Mrs. Eliza Haweis published her book The Art of Beauty in which she outlined the drawbacks of contemporary fashion and commended the lines of historical dress. She was approached in 1878 by the ladies magazine The Queen to write some articles on the subject of Pre-Raphaelite dress. The Queen reported: "A great change has come over the style of English dressing within the last, say, five years…. The world of artists first started the idea of their wives and daughters dressing in harmony with …[their] surroundings, and thence the grandes dames of fashion were influenced" (pp. 139-140). 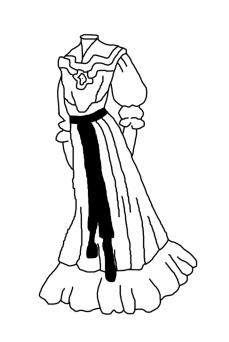 As fashion conscripted artistic dress, historic periods were plundered with a myriad of styles indiscriminately thrown together under the term "aesthetic"; Greek tunics, medieval sleeves, and Elizabethan ruffs became popular adornments for fashionable dress. The Watteau-back dress, a partly fashionable style, was characterized by a large pleat of fabric falling loosely from the shoulders and caught up above the hem; it was inspired by eighteenth-century sacque dresses, depicted in the works of Watteau. These styles were a feature of the tea gown, a loose informal garment that could be worn at home or while receiving guests for afternoon tea.

The year 1877 also saw the opening of the Grosvenor Gallery and the first of the satirist George Du Maurier's series of cartoons, published in Punch, and based around a family known as the Cimabue Browns. The images portrayed the wearers of aesthetic dress as lank and languid men and women-the men in velvet jackets and long hair, the ladies with frizzed hair in long drooping garments- who always seemed to be contemplating the emotional impact of art on life.

The International Exhibition held in London in 1862 had stimulated the growing interest in oriental and exotic foreign goods. Arthur Lasenby Liberty, a young employee of Farmer and Roger's Shawl Emporium in Regent Street, persuaded his employers to open an oriental department. Owing to its huge success, Liberty left to set up his own department store in 1875. His imported fabrics and unusual artifacts were extremely popular with many artists, such as George Frederick Watts, James Whistler, and Frederick Leighton, who frequented the shop. Liberty soon began to produce his own fabrics suitable to the English climate yet with the qualities and colors of imported Eastern examples. In 1884, he opened a dressmaking department, overseen by E. W. Godwin, an architect and honorable secretary of the Costume Society. Godwin had designed many of the costumes for his partner, the famous actress Ellen Terry, whose choice of aesthetic dress was well known.

In 1881, the aesthetic craze was at its height with the production of Gilbert and Sullivan's Patience and the start of Oscar Wilde's lecture tours in America. His lectures included the importance of Liberty to the aesthetic movement and, as Alison Adburgham notes, this could "be said to have sown the first seeds that germinated into the long love affair between the Americans and Liberty's of London" (pp. 32-33).

The aesthetic movement had a popular following in America, the most noted proponent being Annie Jenness Miller who published Dress: The Jenness Miller Magazine. The society painter W. P. Frith captured the aesthetic scene in his painting Private View (1881), which depicted many of the leading proponents of the movement, such as Wilde and Ellen Terry. In his memoirs of 1887, Frith recalled,

"Seven years ago certain ladies delighted to display themselves at public gatherings in what are called aesthetic dresses; in some cases the costumes were pretty enough, in others they seemed to rival each other in ugliness of form and oddity of color (p. 256). "

This telling quote also illustrates how aesthetic dress was now somewhat passé. Many of its elements had entered the mainstream, with the popularity of the tea gown and the ready availability of "artistic dress" in most department stores. A guide to London of 1889 recommends Hamilton's of Regent Street for "those triumphs of needlework: smocked frocks and smocked tea gowns. But it is by no means only in so-called artistic dress that they excel" (Pascoe, p. 351). By the turn of the century, aesthetic dress was no longer seen as radical or revolutionary. While its themes may have lingered in the work of early twentieth-century designers, such as Mariano Fortuny, whose pleated fabrics seem directly inspired by the dress worn in Rosetti's painting A Vision of Fiametta (1878), or the draped velvets of Maria Monaci Gallenga, the sumptuous sophisticated style of art nouveau had captured the artistic imagination, and the soft muted colors and trailing drapery of aesthetic dress were considered démodé.

Haweis, Eliza. The Art of Beauty and The Art of Dress. New York and London: Garland, 1978.