An Afrocentric perspective references African history and applies it to all creative, social, and political activity.

Afrocentricity was founded in the 1940s when Aimé Césaire and Léopold Sédar Senghor, president of Senegal and poet, used the term "negritude" to describe the effects of Western colonization upon black people without any reference to their culture, language, or place. The most significant example of colonization was the Atlantic slave trade that started in the fourteenth century and lasted for 400 years. However, the effects of colonization have arguably caused Africa to become economically underdeveloped and culturally bereft. For the descendants of slaves living in Western countries Atlantic slavery had resulted in them experiencing disadvantage and intolerance, which was based upon their physical dissimilarity from the indigenous population. These points are at the kernel of Aimé Césaire and Léopold Sédar Senghor's idea that negritude is defined by the physical state of the black person, which is blackness.

Afrocentrism gained gravitas when Cheikh Anta Diop (1974) argued that ancient Africans and modern Africans share similar physical appearances and other genetic similarities, as well as cultural patterns and language structures. Diop and others have used this insight to sponsor the idea of ancient Egypt (Kemet) as a black civilization and a reference point for modern Africans.

Frantz Fanon (1967) used the term "negritude" to illustrate the existence of black psychological pathologies that hindered black individuals from attaining liberation within Western modernism and the way all black people are affected by colonialism. An example of black psychological pathology in self-expression is found in the way fashion provides a visual backdrop to the engagement between mask and identity, image and identification. The purpose of fashion in the African setting is precise; it enables black individuals to attain status positions that are outside of their usual habitus. In doing so blacks use some of the visual tools of their oppression and liberation when creating their fashioned self image. Fanon provides a sketch of a black Caribbean man who arrives in the West after leaving his homeland. He leaves behind a way of life symbolized by the bandanna and the straw hat. Once in the West the man shifts into a position, which is manifest by his unease of existing in the West and perhaps from wearing Western clothes. Fanon's rather harsh indictment offers blacks in the West only two possibilities, either to stand with the white world or to reject it. This concept of negritude contributed to the conceptual basis of Afrocentrism.

The way that black people use apparel in personal representations of self may differ and be dependent upon location and perspective. Afrocentric fashion is analogous to Western fashion. Both appropriate much from oppositional fashion expressions; consequently both expressions are fragmented and perennially incomplete. Avid Afrocentrists reject the idea that Afrocentricism might be influenced or contain traces of Western culture, though it is perceptible that Afrocentric fashion is less absolute than other expressive forms, such as music and art.

In Africa and in the African diaspora, disparate elements may be united by their adoption of Afrocentric apparel. Visualizations of Afrocentric clothing are made with reference to Kemet and are therefore mental constructions that are mimetic because they draw upon the idea of an ancient African self and its accompanied gestures, which are of course an aberration, occasioned by the pathology that Fanon alluded to. Around the time of the 1960s American civil rights movement, Afrocentricism became important and sometimes central to the fashion expressions of black people living in America, the Caribbean, and Britain.

Ordinarily, Afrocentric clothing does not feature fine linen dresses, kilts, collars, or the wearing of kohl on one's eyes; yet Afrocentric dressing does feature selected apparel motifs and long-established textiles, production, and cutting methods from the rest of Africa. Afrocentric fashion references the apparel traditions of multicultural Africa, including the traditions of both the colonizers and the colonized. The story of batik (which is Indonesian in origin) is an example of the former.

For Afrocentrists, Afrocentric dress is the norm; consequently Western dress is "ethnic" and therefore "exotic." For that reason, Afrocentric dress has become a virtuoso expression of African diaspora culture. Political and cultural activities like black cultural nationalism have adopted Afrocentric fashion for its visual symbolism. African and black identity and black nationalism are expressed by the wearing of African and African-inspired dress such as the dashiki, Abacos (Mao-styled suit), Kanga, caftan, wraps, and Buba. All of these items are cultural products of the black diaspora and are worn exclusively or integrated into Western dress.

These fashions connote a dissonance. The combination of Afrocentric and Western styles in a single garment or outfit is a direct confrontation of Western fashion, especially if the clothing does not simultaneously promote an Afrocentric leitmotiv or theme. Within its configuration, Afrocentric dress co-opts a number of textiles. Ghanaian kente cloth, batik, mud cloth, indigo cloth, and, to a lesser extent, bark cloth are used. Interestingly, dashikis, Abacos, Kangas, caftans, wraps, and Saki robes are all made in kente, batik, and mud cloth, but are also made in plain cottons, polyesters, and glittery novelty fabrics and tiger, leopard, and zebra prints.

Less popular are apparel items that do not assimilate well in everyday life; these are grand items such the West African Buba, which can be a voluminous floor-length robe that is often embroidered at the neckline and worn both by men and women. Various types of accessories such as skullcaps, kofis, turbans, and Egyptian- and Ghanaian-inspired jewelry are worn with other Afrocentric items or separately with Western items. Afrocentric fabrics that are made into ties, purses, graduation cowls, and pocket-handkerchiefs have special significance within the middle-class African diaspora.

Who Has Worn Afrocentric Fashion?

The most significant expression of Afrocentricity outside of Africa existed in America during the 1960s and 1970s. The Black Panthers and other black nationalist and civil rights groups used clothing as a synthesis of protest and self-affirmation. Prototype items consisted of men's berets, knitted tams, black leather jackets, black turtleneck sweaters, Converse sneakers, and Afrocentric items including dashikis, various versions of Afro hairstyles, and to a lesser extent Nehru jackets, caftans, and djellabas for men. Women adopted tight black turtleneck sweaters, leather trousers, dark shades, Yoruba-style head wraps, batik wrap skirts, and African inspired jewelry. For both men and women, the latter items were Afrocentric; the former were incorporated into Afrocentricity because the constituency wore them and popularized them, and they became idiomatic of black protest.

In 1962, Kwame Brathwaite and the African Jazz-Art Society and Studios in Harlem presented a fashion and cultural show that featured the Grandassa Models. The show became an annual event. The purpose was to explore the idea that "black is beautiful." It did so by using dark-skinned models with kinky hair wearing clothes that used African fabrics cut in shapes derivative of African dress. The impetus for the popularity of Afrocentric fashion in America arose from this event. The Grandassa Models explored the possibilities of kente, mud cloth, batik, tie-dye, and indigo cloths, and numerous possibilities of wrapping cloth, as opposed to cut-and-sewn apparel. Subsequently, such entertainers as Nina Simone, Aretha Franklin, the Voices of East Harlem, and Stevie Wonder on occasion wore part or full Afrocentric dress. In America, the Caribbean, and Britain, Afrocentric fashion was most popular during the 1960s and 1970s. Turbans, dashikis, large hooped earrings, and cowrie shell jewelry became the most popular Afrocentric fashion items.

Similar to the Black Panthers, Jamaican Rastafarians wear "essentialized" fashion items. However, spiritual, aesthetic, and cultural values of Rastafarianism are implied through various apparel items. The material culture of Rastafarianism is directly linked to cultural resistance, signified by military combat pants, battle jackets, and berets. These items were introduced in the 1970s and provided Rastafarians with a sense of identity that is further supported and symbolized by dreadlocks, the red, green, and gold Ethiopian flag, and the image of the Lion of Judah, which represents strength and dread.

Jamaican Dancehall, a music-led subculture that started with picnics and tea dances in the 1950s, features a wide repertoire of fashion themes. One widely used theme is African. African dress is omnipresent in Dance-hall fashion; items such as the baggy "Click Suits," worn by men in the mid-1990s, were based on the African Buba top and Sokoto pants. Women's fashions-including baggy layered clothing made in vibrant and sometimes gaudy colors; transparent, plastic, or stretchable fabrics; and decorations, such as beading, fringing, or rickrack- were shaped into discordant Western silhouettes. Dancehall fashions of the 1990s symbolized sexuality, self-determination; and freedom. Wearers rejected apparel that was comfortable and practical in favor of clothing that celebrated hedonism. 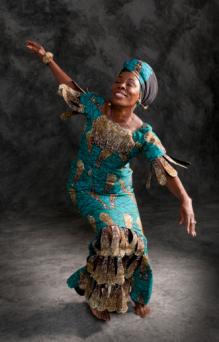 Wearers of Afrocentric dress distinguish themselves and celebrate "Africanness" within the context of the West. Adoption of Afrocentric clothing is a way of casting aside the deep psychological rift of topographical past and modern present that the psychiatrist Frantz Fanon writes of in Black Skin, White Masks (1967). Afrocentric dress is also present in black music cultures of the Caribbean, United States, and the United Kingdom. In the early 2000s B-boys and girls, Flyboys and girls, Dancehall Kings and Queens, Daisy Agers, Rastafarians, neo-Panthers, Funki Dreds, and Junglist all include Afro-centicity in their fashion choices. Afrocentric fashion features combinations of commonplace apparel items that represent dissonance with selected preeminent pieces from Africa's primordial past and its present.