Art nouveau design penetrated into all types of modern, luxury European decorative arts in the period from 1895 to 1905. Its undulating vegetal curves and graceful floral swirls were also a design gift to the Parisian couturiers and until about 1908 or 1909 art nouveau style was energetically appropriated for seasonal, high-fashion use.

Evening garments were the most lavishly attuned to art nouveau. Couturiers swathed their evening wear with a profusion of silk brocade, appliqué, embroidery, and lace. From neckline to hem, the designers played art nouveau swirls around the voluptuousness of the fashionable figure, which itself was curvaceously shaped by "S"-bend corsets. Even tailored woolen walking costumes were trimmed with swirlings of appliqué. By 1907-1909, the style's popularity had waned, replaced by a more upright figure styled with a geometric simplicity drawn from the Vienna Werkstatte, a fashion drawing from Les Modes of August 1909 by Gaby, Toilettes pour Le Casino.

This appropriation of art nouveau styling coincided with the moment in the history of couture when a united business structure was firmly established by the Chambre Syndicale de la Couture Parisienne. Unrivaled elsewhere in the Western world, Paris couturiers dressed the women of international royal courts and high society including in Japan and tsarist Russia, the wives of the wealthiest international plutocrats, and the great actresses of the Paris stage. Commercial clients already included the grandest department stores at an international level.

The art nouveau "look" was at the cutting edge of modern style. Only the most fashionable wore it in its fullest manifestation, while others preferred moderated versions. These styles were spread internationally through fashion journals, such as Les Modes and down through middle-class oriented magazines such as The Ladies Field and La Mode illustrée. Les Modes of July 1902 featured, for example, an art nouveau ball dress by Maggy Rouff with full-length swirls in silver and diamante, on a straw-colored silk ground trimmed with alençon lace.

From 1895 all the top twenty or so Paris salons were developing art nouveau fashions, from the House of Worth (whose designer was by then Jean-Philippe Worth) through the salons of Doucet, Maggy Rouff, Jeanne Paquin, and Laferriere to cite just a few. They launched season after season of art nouveau-styled garments on to the international fashion market. Examples survive in the great fashion collections of museums in Paris and the United States.

Within middle-class levels of ready-to-wear manufacture (for department stores and top levels of wholesale manufacturers), the style was watered down but clearly visible, as in a tailored woolen walking costume featured in La Mode illustrée, journal de la famille in January 1901 for example. The swirl did not, however, penetrate the cheapest levels of mass manufacture of tailored clothing for women. At the level of John Noble's Half Guinea Costume, as seen in the Lady's Companion of 19 September 1896, there was no trimming or decoration at all. Described as "dainty and durable," consumers were concerned with little other than a vaguely stylish silhouette and issues of durability. 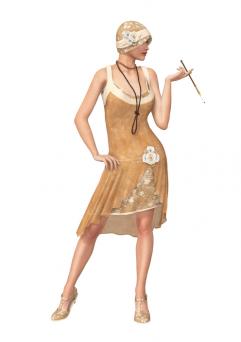 Following the demise of art nouveau as fashion inspiration, the appropriation of art deco design by Paris couturiers informed the next fashion look. This had two phases. The first ran from about 1910 to 1924 and was built around neoclassical/oriental/peasant styling. The second ran from 1924 to about 1930-a more minimalist style, with modernist design touches

Paul Poiret led the first art deco fashion phase. His life was absorbed by orientalism, even as the Ballets Russes arrived in Paris, in 1909. He launched his slim, simple, high-waisted line in 1908, with its less-structured cut and delicately layered exotic style. Poiret was a collector of fauve paintings, which inspired his use of purples, pinks, blues, greens, and golds. Poiret's passion for orientalism, chinoiserie, European peasant, and North African design introduced a fresh bold simplicity to the cut and decoration. His 1911 One Thousand and One Night Ball set off a lasting vogue for the exotic, with use of light silks, gold tassels, turbans, tunic dresses, and bold use embroidery. Poiret unwillingly shared his limelight with other couturiers such as Jeanne Lanvin, Lucile, and the Callot Soeurs, who all created versions of the slender, high waisted and often sumptuous exotic look.

From about 1924 Paris fashion crystalized into the hipless garçonne look, reflected in the new sportive couture client, with her flat chest, bobbed hair, and less socially restricted lifestyle. The new generation of key designers included Jean Patou and Chanel, who both borrowed elements from Sonia Delaunay's far more extreme Orphic cubist designs. Madeleine Vionnet developed her skillful bias cut while Lelong produced the first ready-to-wear to come from a couture salon These short-skirted, simple, art-deco garments were nevertheless always made from the finest wool or the most sophisticated gilded, flowered Lyon silks and embellished with complex beading or tucking to identify their couture provenance. Patou ended the look when he lowered the hemline in 1929.

A group of young struggling fauve artists produced a generation of fashion illustration of lasting quality and celebrity. Under the original inspiration of Paul Poiret, and his pochoir printed Les Choses de Paul Poiret of 1909 and 1911 this period launched the careers of Barbier, Lepape, Iribe, Dufy, Erté, Marty, Benito, and Bonfils.

The short skirt and dropped waistline were copied at all levels of the fashion trade, this time right down to the cheapest ready-to-wear, as seen in Sears and Roebuck and English ready-to-wear wholesalers' catalogs. Fashion knowledge and consumption opportunities were spread to a mass audience through the movies, through new cheap fashion journals, through home dressmaking, and through the wide availability of artificial silk or rayon (albeit still an unreliable fashion fabric). All of this accelerated the demand for mass, machine-made ready-to-wear and thus "up and coming" working-class girls on both sides of the Atlantic embraced moderated forms of art deco fashion even though their financial means were limited.

While historical styling is never repeated in the same way, both art nouveau and art deco styles have been subject to fashion revivals. As the maxi hemline became accepted from the late 1960s, in Britain new psychedelic styles were linked to a subversive nostalgia for the imperial Edwardian period, for art nouveau, and for the work of Aubrey Beardsley. This is evident in the original art nouveau brand logo selected by Barbara Hulanicki for her fashion company Biba, founded in 1964. This is also clear in the art nouveau romanticism of her fashionable evening silhouette and use of feather boas, though she fused this with early 1930s style in her use of slinky satins and the bias cut. John Galliano presented several Edwardian-styled fashions in 1996-1997.

Art deco design is far more deeply etched on the public mind as epitomizing a mythical ideal of free, youthful gaiety, glamour, and sexuality. This image has been strengthened by a stream of popular movies set in the 1920s, including Singin' in the Rain (1952), Some Like It Hot (1959), and Thoroughly Modern Millie (1967), brought to the stage in New York in 2002 and in London in 2003. A filmed version of F. Scott Fitzgerald's The Great Gatsby in 1974, while the Chicago of 2002 and the Art Deco exhibition at the Victoria and Albert Museum of the same year, further escalated public fascination. The mid-1960s revival was led by Yves Saint Laurent with his African art deco collection in 1967, which perfectly suited that period's young, androgynous style. At the turn of the second millennium, Galliano reworked the flapper style in 1994, while Diane von Furstenberg showed flapper dresses with dropped waists and beaded fringing in New York on 17 September 2003. 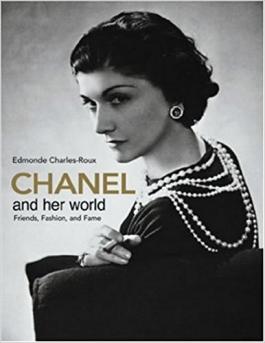 Chanel and Her World

Coleman, E. A. The Opulent Era, the Work of Worth, Doucet and Pingat. London and New York: Thames and Hudson, Inc., Brooklyn Museum, 1989.