C. Willett (1878-1961) and Phillis (1887-1974) Cunnington were medical doctors with a general practice in North London in the 1930s; they were also major dress historians. C. W. Cunnington served in World War I as a captain in the Royal Army Medical Corps after graduating from Cambridge University. He married Phillis in 1918. The Cunningtons amassed a vast collection of English costume between the 1920s and the late 1940s, which they stored in a big shed in the garden of their house in North London.

Together they published on British dress history from the Middle Ages through the 1950s in their five Handbooks of English Costume, their History of Underclothes, and their Dictionary of English Costume, all published between 1951 and 1960. C. W. Cunnington also published his English Women's Clothing in the Present Century in 1952, while three of his earlier books, written between 1941 and 1948, elucidated his own theories about dress, fashion, and sexuality. He died in 1961.

The Cunningtons' famous handbooks mapped the development of styles of male and female dress. Each volume was illustrated with quotes from novels and newspapers of the period in question, and was illustrated by small line drawings as well as photographs of paintings. This approach paralleled and extended the work of German and French dress historians of the period as Oskar Fischel, Max von Boehn, and Maurice Leloir.

C. W. Cunnington's medical training influenced his primary interest, which was the psychological motives that he considered responsible for changes in women's dress styles in the late nineteenth century. Born in 1878, he would have been familiar with the bustles of the 1880s, the S-bend of the early 1900s, and the flat-chested boy-girl fashions of the 1920s. His interest in the psychosexual functions of women's dress had been enhanced by the 1930 publication of the psychiatrist John Carl Flügel's study, The Psychology of Clothes. James Laver, who was the Keeper of Prints and Drawings at the Victoria & Albert Museum as well as C. W. Cunnington's friendly rival for the leadership of British dress historiography, also took an erudite but more popular approach to similar themes in his book Taste and Fashion (1937).

C. W. Cunnington published five books on psycho-sexual themes in women's dress. His first was Feminine Attitudes in the Nineteenth Century (1935), followed by English Women's Clothing in the Nineteenth Century (1937), Why Women Wear Clothes (1941), and the Art of English Dress and The Perfect Lady (both 1948). In Feminine Attitudes he used the fashionable middle-class Victorian garments he and his wife assiduously collected-which he called his "specimens"-as tools for studying "the psychological background of women," and specifically their sexuality (1935, p. 2). Cunnington added that "we were concerned with mass psychology, not with the psychology of the individual" (Tozer, p. 3). 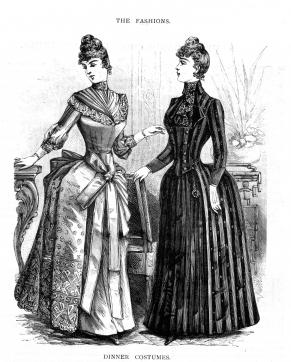 Cunnington claimed bustles were inspired by the "mating instinct"

Cunnington diagnosed "the feminine mind through analysis of a series of 'Attitudes,' … That is to say those unconscious postures of mind and body which members of a social group will display as features in common." The attitudes that Cunnington listed included "the Conventional Attitude of those multitudes of mute, inglorious females … who never did or said or thought anything that distinguished them from the mass of women of their day." The "Feminine Attitude," on the other hand, was influenced by the element of "sex attraction," while "the Herd Instinct" was defined as "the wish to imitate in appearance and conduct those in the same social group." Thus Cunnington showed that he shared Flügel's view of the centrality of sexuality as a driving motivation in fashion development among women. For example, he saw the development of the 1870s bustle as inspired by the "mating instinct," whereas that of the 1880s was inspired by the "maternal" instinct. He described the gait of Edwardian women, which he would have seen when he was in his mid-twenties, as "that provocative pelvic roll … perhaps the most sensual Attitude of the century" (1935, pp. viii, 254, 306).

The first doubts about the accuracy of Cunnington's opinions surfaced among women dress historians in 1949, when Doris Langley Moore wrote that she "had the strongest doubt that fashion … is motivated by sex appeal" (p. 21). Nonetheless, C. W. Cunnington's reputation as a leading dress historian and theorist remained in place for a further thirty-seven years. In 1986, however, his work was subjected to a feminist reconsideration led by Jane Tozer, a curator at the Platt Hall, Manchester, Museum of Costume. While acknowledging the value of the Cunningtons' famous handbooks for their details of style chronology, etiquette, and specific nomenclature, Tozer specifically targeted Cunnington's "dated sexism," denouncing it as a "simplistic and now outdated appraisal of the origins of human sexuality." She also questioned Cunnington's anecdotal approach as well as "his notorious vagueness" in naming sources in his books (pp. 11-12). Cunnington's reputation was undoubtedly damaged. 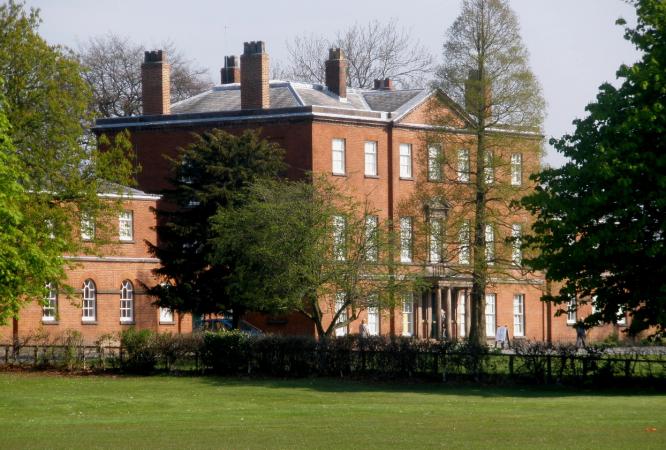 The Museum of Costume, Manchester

In addition to their published books, the Cunningtons made a major contribution to the study of fashion history through amassing their dress collection. Put together at a time when almost no one was collecting old garments, let alone late nineteenth-and early twentieth-century middle-class clothing, the Cunningtons' collection has since become one of the most renowned in Britain. They sold it to Manchester City Council in 1947 to form the basis of the Museum of Costume at Platt Hall. The museum's first curator was Anne Buck.

The Cunningtons were medical practitioners. They were not professional museum curators and undertook all their research unpaid if not unrewarded. They were interested in finding examples of "ordinary" people's dress to use as general representations of garment types, which C.W Cunnington then related to his typology of feminine attitudes. He had no interest in the owners of individual garments and felt no need to record their names or to provenance sources. Thus much of this information was lost or never recorded. It was left to Anne Buck and to later generations of curators to put this remarkable collection into order.

While C. W. Cunnington's more theoretical comments have not withstood the passage of time, the handbooks he co-authored with his wife as well as Phillis Cunnington's own work still offer a carefully compiled and useful introduction to the history of English costume. Publishing and collecting through the 1930s to the 1970s, at a time when fashion history still had no academic status and very little standing in museums, the Cunningtons educated the next generation of dress historians and curators who professionalized the field.

--. Handbook of English Costume in the Seventeenth Century. London: Faber and Faber, 1955.

--. Handbook of English Costume in the Eighteenth Century. London: Faber and Faber, 1957.

--. Handbook of English Costume in the Nineteenth Century. London: Faber and Faber, 1959.

Cunnington, Phillis. English Costume for Sports and Outdoor Recreation: From the Sixteenth to the Nineteenth Centuries. London: Adam and Charles Black, 1967.

--. Occupational Costume in England: From the Eleventh Century to 1914. London: Adam and Charles Black, 1967.