Once restricted to young women from wealthy families on the social register, the traditional long, white formal dress and opera-length kid gloves of the debutante are more and more frequently also worn by daughters of the middle class. Cultural variations, such as the Hispanic quinceañera, not only introduce a young woman into society but also reinforce ethnic identity. While making a debut no longer necessarily signifies that the deb is looking for a husband-the age of a debutante ranges from fifteen to the mid-twenties-it is still a rite of passage denoting adult status socially.

The term "debut," to enter into society, is French in origin but became familiar to English speakers during the reign of King George III (1760-1820) when Queen Charlotte began the practice of introducing young aristocratic women at court. From 1837 on, they were called "debutantes," later shortened to "debs." The Lord Chamber-lain's Office developed strict regulations regarding proper dress for court presentations. From 1820 to 1900, ladies wore fashionable evening dresses, a mandatory headdress of veiling and feathers plus a train attached first at the waistline and, in later years, at the shoulders. Long, white kid gloves, bouquets, or fans were often added (Arch and Marschner 1987). In the United States of the early nineteenth century, elite families gave relatively small parties to introduce their marriageable-age daughters to their friends and to single men of appropriate age and status.

After the Civil War and the emergence of new wealth based on industry and railroads, the parties began to grow into lavish balls as old and new wealth vied with one another for status. One party featured an artificial lake with a large papier-mâché swan that exploded on cue, sending hundreds of roses into the air. American debutantes wore full evening dress but did not add the headdresses and trains of their English counterparts. White became standard for English debs by the end of the nineteenth century while American girls could also choose a color, as long as it was a very pale pastel. Male escorts wore formal evening wear, either tails or tuxedos, just as in the early twenty-first century. As an alternative to the private parties, exclusive social clubs, usually all male, were formed in the nineteenth and early twentieth centuries to present a group of their daughters or granddaughters at a cotillion or ball. Social club cotillions are usually more formal than family balls with a master of ceremonies and a grand march or promenade before the dancing begins. All of the girls in the group must wear the same color, almost invariably white, but may choose their own style of dress. Long, white gloves are usually worn with strapless or sleeveless gowns (Post 1937, 1969, 1997). Individual parents may give an additional party sometime within the debutante social season, traditionally the period between Thanksgiving and New Year's when university students are home for the holidays (Mills 1959; Tuckerman and Dunnan 1995).

In the twentieth century, debutante balls, whether given by a family or by one of the exclusive social clubs, gained media attention, and the public began criticizing the lavishness of the events, particularly in the 1930s and 1940s. In the 1950s, subscription dances were organized to raise money for charity through debuts. For an entrance fee, debutantes could be introduced at an annual ball and the proceeds contributed to a charitable cause. One of the largest is the National Debutante Cotillion and Thanksgiving Ball, of Washington, D.C., benefiting the Children's Hospital National Medical Center. In addition to couching the social event within philanthropy, subscription debutante balls allow middle-class parents to give their daughters a debut, as long as they have a sponsor from the cotillion organization. Financial requirements for balls usually include a participation fee, the purchase of a table for eight, and sometimes the purchase or sale of space in a souvenir book, and, of course, the mandatory dress and gloves. Subscription balls or cotillions vary in prestige and exclusivity, and the costs reflect these differences.

Every year thousands of fifteen-year-olds from a wide variety of Hispanic backgrounds celebrate their birthdays with a quinceañera, a unique combination of religion and debut that emphasizes cultural identity. Few young African American women make their debuts through the older social clubs, but many debut through African American organizations. The Van Courtlandt Society in San Antonio, Texas, was founded in 1915 and shortly thereafter began holding balls, and in Savannah, Georgia, the Alpha Phi Alpha fraternity has sponsored the Annual Debutante Presentation and Ball since 1944. Some African American debuts are as expensive and exclusive as those of the white balls, but others, like the Club Les Dames Cotillion of Waterloo, Iowa, are quite inexpensive and focus on the debutantes' social and academic accomplishments. The Chicago chapter of the Kosciuszko Foundation emphasizes scholastic achievement and community service in addition to the debs' Polish heritage. The San Marino Woman's Club of California requires that its debs perform a number of volunteer hours in community projects (Lynch 1999; Salcedo 1997). With the exception of the quinceañera, a fashionable white evening gown with long, white kid gloves is the standard dress for all of the above debuts.

Debutante events vary ethnically and socioeconomically, but the biggest difference in dress is regional. Mardi Gras debutantes in New Orleans wear jeweled gowns and long trains with Medici collars as well as glittering crowns, while Texas debs stray the furthest from classic white formals. For instance, in Laredo, Texas, young women from the oldest families wear elaborate eighteenth-century-style ball gowns with panniers, and middle-class debs wear heavily beaded ultra suede "Native American" costumes in pageants held during the annual George Washington Birthday celebration. During Fiesta in San Antonio, Texas, twenty-four duchesses, a princess, and a queen wear elaborately bejeweled gowns and trains in a faux coronation. The trains are based upon the requirements for English court presentations. The earliest ones were usually of satin and lightly beaded, but soon became the background upon which motifs from such themes as "The Court of Olympus" (1931) or "Court of the Imperial House of Hapsburg" (1987) could be represented in rhinestones and beads. They may weigh up to seventy-five pounds, and up to thirty-five thousand dollars is spent on the handwork. While wearing all of those rhinestones and beads, the young women must perform the royal bow in which they lower their bodies until they are essentially sitting on the floor and then bend forward from the waist until the head almost touches the floor. The bow has been copied all over Texas and is known as the "Texas dip" when it is performed by Texas debs at the International Debutante Ball in New York City (Haynes 1998).

Quinceañeras: A Hispanic Rite of Passage 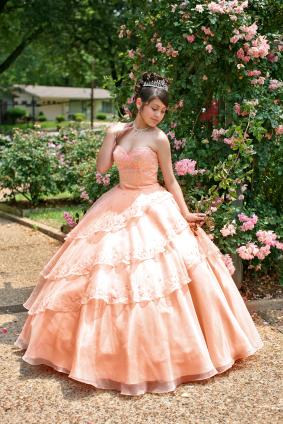 Quinceañeras (from quince or fifteen) are traditional celebrations of a daughter's fifteenth birthday. Unlike Sweet Sixteen celebrations, they combine religious and social elements. A quinceañera begins with a full Catholic mass followed by a dinner and dance. Most parish priests require attendance at special religious classes before the event. The honoree wears a white or pastel dress with yards of ruffles and lace and is crowned with a tiara by her grandmother at the dance. Ten to fourteen of her closest friends and relatives, who with their escorts make up the court of honor, wear matching bridesmaid-like dresses. A boudoir-style "last doll" is dressed identically to the honoree and symbolizes the end of childhood (Salcedo 1997).

Although many people feared that debuts would disappear in the 1960s when such elitist and ostentatious displays of wealth came under heavy social criticism, debuts have actually become more prevalent. The benefits of debuts have even extended to young men at times. A small number of quinceañeros have been given for fifteen-year-old boys in Hispanic communities, and in Dayton, Ohio, the Beautillion Militaire has been held annually since 1968 for African American males. The organizers felt that since debutante events seemed to enhance self-esteem and raise the aspirations of the young women who participated in them, similar benefits might accrue to their young men taking part in similar events. Now, thousands of daughters (and a few sons) from a wide socioeconomic range become Cinderellas (or Prince Charmings) for a night.