Diana Vreeland (1903-1989) was, and continues to be, an iconic figure in fashion history, whose distinctive personal style and penchant for fantasy influenced her work at Vogue and the exhibitions she organized at the Costume Institute of the Metropolitan Museum of Art. Diana Vreeland was born in Paris in 1903 to Emily Key Hoffman and Frederick Young Dalziel. The Dalziels moved to New York in 1904, where the socially eminent family enjoyed a prosperous lifestyle. According to Vreeland's biographer, she was a vivacious child who was interested in fantasy and the transforming powers of artifice from a very young age. In 1924, Diana married Thomas Reed Vreeland, a socially prominent banker. The couple moved to London in 1929, where they remained until 1933. In London Vreeland started her career in fashion by opening a lingerie shop in the city, and her frequent visits to Paris familiarized her with haute couture. As a patron of designers such as Jean Patou, Elsa Schiaparelli, Madeleine Vionnet, and Main-bocher, Vreeland's flair for dressing, combined with her social standing, made her the subject of commentary in the social pages and in magazines such as American Vogue, Harper's Bazaar and Town and Country.

The Vreelands moved back to New York in 1935. Diana began her first job in fashion editorial work at Harper's Bazaar in 1937. She was promoted to the position of fashion editor in 1939, working under editor-in-chief Carmel Snow, and remained at the magazine until 1962. Vreeland first came to the readership's attention with her 1936 column entitled "Why Don't You?" The feature encapsulated her personal belief in the ability of fashion to transform women by offering such extravagant and fantastic suggestions to her readers as "Why don't you … Turn your child into an Infanta for a fancy dress party?" (August 1936) and "Why don't you own, as does one extremely smart woman, twelve diamond roses of all sizes?" (January 1937) Vreeland honed her editorial skills at Harper's Bazaar by working closely with such photographers as Richard Avedon and Louise Dahl-Wolfe to implement her ideas and transfer her imaginative vision to the fashion pages.

Vreeland became publicly known as the archetypal fashion editor, famous for such proclamations as "Pink is the navy blue of India" (Donovan). Her inimitable persona was further popularized when she was parodied in the 1957 film Funny Face.

In 1962, Vreeland moved to American Vogue as associate editor. In 1963, Sam Newhouse, the owner of Condé Nast, promoted her to editor-in-chief in an effort to reinvigorate the magazine. Having complete control over the look of the magazine, she imbued its pages with her distinctive style and flair for the fantastic. During Vreeland's tenure, the magazine's editorial spreads presented a popular audience with exoticism, aristocratic glamour, and such atypical models (atypical because of their youth, multicultural appearance, and unisex body types) as Veruschka, Penelope Tree, Twiggy, and Lauren Hutton. Vreeland firmly believed that the magazine had the ability to transport the reader, just as clothing had the ability to transform the wearer. The mundane realities of life did not interest her. 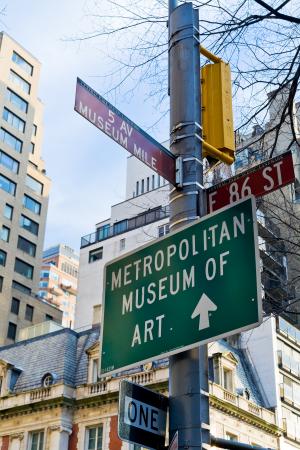 By the late 1960s, Vreeland's extravagant fashion editorials were deemed out of touch with the times and her position at Vogue was terminated in 1971; she was replaced by Grace Mirabella. In 1972, Vreeland became involved with the Costume Institute at the Metropolitan Museum of Art, the museum's acclaimed collection of historic costumes. Vreeland's fashionable and colorful personality was perceived as an opportunity to revitalize the costume exhibitions. Vreeland was brought in with the title of special consultant and acted as a creative director for twelve exhibitions from 1972 through 1985. Through these highly popular exhibitions, which included "Balenciaga," "The Eighteenth-Century Woman," "Romantic and Glamorous Hollywood Design," "The Glory of Russian Costume," "La Belle Époque," and "Yves Saint Laurent," Vreeland succeeded in placing her distinctive stamp upon the museum world. She transferred her unique style of fashion marketing to the museum gallery, taking inspiration from the runway, retail trends, fashion editorials, and her own fertile imagination. Her costume exhibitions were spectacular sensory experiences; as she herself admitted in her autobiography, she was interested more in effect than historical accuracy.

In 1976, she received the medal of the Legion d'Honneur from France for her contributions to the fashion industry. In 1984, she published her memoirs, entitled D.V. Vreeland died in New York City in 1989, but her status as an icon has had a lasting influence on the world of fashion. In 1993, the Costume Institute celebrated her memory with an exhibition entitled "Diana

Vreeland, Immoderate Style." She was the subject of a one-person off-Broadway play entitled Full Gallop in 1995. The repeated reexamination of Vreeland's impact on fashion attests to her impact as an arbiter of style who fostered the visibility of fashion on a popular level.