A folklore look is a style inspired by peasant dress. The term "folklore look" came into use around 1970. However, fashions drawn from peasant costumes have appeared numerous times in the last one hundred years.

Fashion has a long history of borrowing from other "exotic" or "primitive" cultures to create new looks that perfectly express the moment. Western fashion's fascination with exoticism dates to the eighteenth century when wealthy Europeans and Americans donned Turkish-inspired ensembles for masquerade and to sit for portraits. The love of things oriental continued into the nineteenth century with the popularity of cashmere shawls, fez caps, and kimonos.

The trend for geometric embroideries on gauzy fabrics coincided with a period in fashion history of clothes with simple shapes and elaborate decoration. Many blouses, delicately embroidered with Slavic motifs, survive from this period in museum collections. 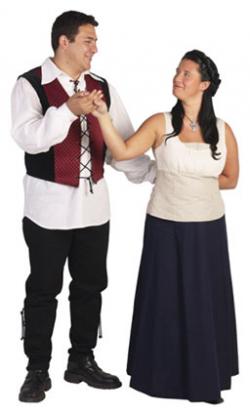 Living on the Earth (Random House, 1971) was written as a guide for those who had rebelled against industrial society by turning to self-sufficient communal living. Author Alicia Bay Laurel showed readers how to raise vegetables, build dwellings, and give birth at home. She also explained how to make clothes. Her hand-lettered book gave simple directions for making your own patterns, remaking secondhand clothes, tiedyeing, and embroidering. Many of her patterns were based on the simple shapes of folk clothing including a burnoose, a smock shirt, a djellaba, and a Mexican blouse.

Folk-inspired motifs and shapes appeared in other apparel as well. Sweaters frequently took their inspiration from folk designs, such as the Fair Isle patterns popularized by the Prince of Wales in the 1920s. In the 1930s, skiwear designers looked to Scandinavian, Swiss, and Austrian models for trousers, jackets, sweaters, and caps to wear for this newly fashionable sport. The designer Elsa Schiaparelli included Austrian Tyrol looks in her collections. Peasant styles occasionally sprang from resorts frequented by the rich and famous, such as men's embroidered shirts from Mexico, or ponchos suitable for wearing as beach cover-ups or on board ship.

Rise of the Hippies

The folk and beat looks of the 1950s signified the beginnings of a rebellion against mainstream society that blossomed into the full-blown "flower power" of the later 1960s. This social transformation, fueled by the comingof-age of the baby boomers, incorporated the antiwar movement and the new youth culture of sex, drugs and rock and roll. Hippies, as they were known, wore antiestablishment looks borrowed from India, Morocco, Mexico, and Native American communities. The hippie movement foreshadowed the ecology movement; once again the clothes of peasants seemed right for the time. In the 1970s peasant looks merged with ethnic looks, forming the immensely popular "folklore look."

Authentic folk and ethnic patterns became available to home sewers in the mid-1970s, when three California women founded Folkwear. Their first two patterns were for a Syrian dress and a Turkish coat. In the early 2000s, the company offers patterns for smocks, various peasant blouses, shirts, vests, and dirndls.

Designers and the Folklore Look

Designers inspired by street styles brought the folklore look to high fashion in the 1970s. The English designer Zandra Rhodes observed that in the late 1960s, with the Beatles in India and the Rolling Stones in Morocco, "folklore was appealing." She found the peasant embroidery and the simple shapes of ethnic clothes "infinitely pleasing" and began creating dresses with ethnic shapes for her hand-painted textiles. Before long, the Paris couture got in on the act, particularly Yves Saint Laurent. His Russian collection of 1976-1977 featured rich peasant looks with full skirts, corselet-type bodices, and short decorated jackets in luxurious fabrics trimmed with fur. This collection introduced colorful scarves, shawls, ruffled skirts, and boots to mainstream fashion.

Since the 1980s any number of designers regularly revived the folklore look. Jennifer Craik describes this process as "bricolage"-the creation of new patterns and styles from a variety of sources, including non-Western dress. Mixing high fashion and everyday clothing is consistent with the postmodern, multicultural world that emerged in the 1980s. At the couture level, Christian Lacroix is known for incorporating peasant elements from Provence into his exotic outfits. John Galliano mixes historical and cultural influences to create innovative designs for Dior. The appropriation of themes from peasant cultures is characteristic of ready-to-wear collections from designers such as Anna Sui, Vivian Tam, Miu Miu, Arden B., and Dolce & Gabbana. Such looks are easily recognizable and move rapidly across the fashion landscape. Indeed, in the spring of 2002, the embroidered peasant blouse was featured by the fashion press as the "look of the moment," and was soon copied at all levels. Donatella Versace was photographed for the March 2002 issue of Vogue wearing jeans and an embroidered peasant blouse purchased from The Ukrainian Shop in New York City. Barely a season later the look was declared passé.