The German sociologist and philosopher Georg Simmel was born in Berlin on 1 March 1858 to assimilated Jewish parents. Between 1876 and 1881 Simmel studied history and philosophy in Berlin. His doctoral thesis (1881) and post-doctoral dissertation (1885) both dealt with Immanual Kant. His rhetorical gift proved to be successful with academic and nonacademic audiences alike, and his lectures became social events. In 1890 he married the writer Gertrud Kinel. A year later they had their only son, Hans. In 1894 he published the essay "The Problem of Sociology," which inaugurated a separate social science. Simmel and his wife were at the center of cultural circles in Berlin; their friends included the poets Rainer Maria Rilke and Stefan George as well as the sculptor Auguste Rodin. In 1903 his essay "The Metropolis and Mental Life" constituted an early study of urban modernity. Latent anti-Semitism, reservations about the academic validity of sociological studies, and envy of Simmel's social popularity hindered his professional progress in Berlin, and in 1914 he accepted a call to the university in Strasbourg, where he died on 26 September 1918.

Simmel's discussion of fashion, significant for its early date within academic discourse, its conceptual rigor, as well as its metaphysical breadth are defined by his simultaneous adherence to philosophical tradition and the formation of a sociological methodology. Accordingly, he viewed fashion both as an abstract concept that generates and influences cultural perception and as a defining factor in social and interpersonal relations. Simmel's beginnings as a neo-Kantian philosopher prepared his view of cognition as a biological process of adaptation by human beings to their environment, a view which is not only situated in a scientific (neo-Darwinian) discourse but also extended to culture-intellectual as well as sensory- within a contemporary (modern and urban) environment. Simmel defined the truth within expressions of reality pragmatically through its appropriateness for living practice. This led him to the emerging discipline of sociology, which developed the ground for direct application of such concepts to sociopolitical existence. His precursors herein were Auguste Comte, Herbert Spencer, and Gabriel Tarde, and among his contemporaries were Ferdinand Tönnies, Werner Sombart, Émile Durkheim, and Marcel Mauss.

The methodological mix of metaphysics, economics, and social theory generated for Simmel an interest in fashion, which he viewed as a theoretical and material field of investigation that offered space for emphatic, almost literary, evocations of clothing but also for a formal description of (dress) codes as visual and structural primers for social groups and settings. He began to investigate the topic in an 1895 essay titled "Zur Psychologie der Mode" (On the psychology of fashion). In this essay, Kantian heritage accounts for a philosophical focus on the subject-object relation. Simmel asks where cognition is founded, in the objects of cognition or in the cognitive subject itself. He applies the question to fashion: Is cognition founded in the clothes we choose to wear, or is it the human mind that chooses the clothes? In this, his first essay about fashion, cognition and self-awareness are regarded as creative achievements of the subject, aided by guidelines extracted from the conglomerate of experience. 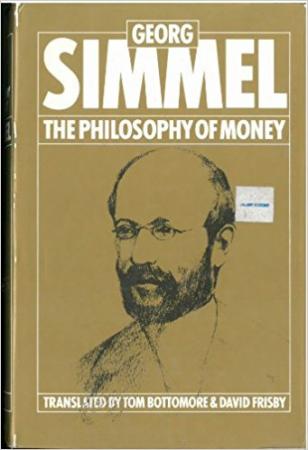 In his book The Philosophy of Money, Simmel returned to the progressive division of subject and object in modernity, this time applying socioeconomic criteria. In this work Simmel devotes a telling passage to fashion, describing how "the radical opposition between subject and object has been reconciled in theory by making the object part of the subject's perception," partly through a practice that produces the object by a single subject for a single subject. In modernity, mass production-with its division of labor-renders such reconciliation impossible. The analogy that Simmel draws here is "the difference … between the modern clothing store, geared towards utmost specialisation, and the work of the tailor whom one used to invite into one's home" (Simmel, p. 457). The example is indicative of Simmel's approach. Not only does the object of fashion-more than any other object of consumption that must remain at a distance from the body- allow for an introduction of sensuality and haptic experience within theory, but it also applies abstract concepts directly to corporeality. In discussing the production and consumption of fashion, Simmel leads the reader directly back to his or her own experience as a wearer of clothes and as a modern consumer, thus generating an important link to personal experience that coined contemporary philosophy (Simmel's subsequent term Lebensphilosophie [metaphysics of existence] would follow French philosopher Henri-Louis Bergson's élan vital, or nature's creative impulse).

In 1904-1905 two extended essays by Simmel were published-one in English under the simple heading "Fashion" and one in German titled "Philosophie der Mode" (Philosophy of fashion). They share a similar structure, but the former set an empiricist or rationalist tone that would determine Simmel's reception in Anglo-Saxon social sciences as a formal sociologist and precursor to the Chicago school of empiricist, urban sociology.

Akin to set theory, Simmel describes in his sociology the developmental process of social differentiation as a confluence of the homogeneous segments of heterogeneous circles. In modern (especially urban) culture both psychological and social differentiation are geared to minimizing physical friction and channeling the energy of personal collisions into dynamic movement as an economic principle (e.g., competition). Fashion exemplifies this process acutely. The complex mix within modern dressing between invention and imitation, between socially sanctioned conformity for societal survival and necessary independence for personal gratification and the formation of the self (even cognition), is found in all clothing rituals and codification. The abstract and generalized tone with which fashion is debated makes Simmel's analyses still pertinent in the twenty-first century, because he eschewed historicity, romanticism, or concreteness vis-à-vis sartorial styles. 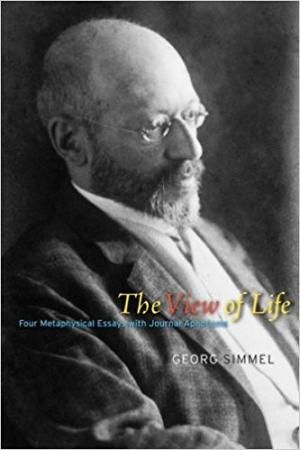 The View of Life: Four Metaphysical Essays with Journal Aphorisms

Two sets of his observations, in particular, render fashion a generic model both for the recognition of societal procedures and a phenomenology of modernity itself. The first is the import of fashion by strangers from out-side a given set or circle. Here the term "role-playing," which would become so significant for modern sociology, is prefigured. In his essays Simmel analyzes how a style or appearance of dress undergoes a developmental process of rejection to acceptance. "Because of their external origin," he wrote in 1904, "these imported fashions create a special and significant form of socialization, which arises through mutual relation to a point without the circle. It sometimes appears as though social elements, just like the axes of vision, converge best at a point that is not too near.… Paris modes are frequently created with the sole intention of setting a fashion elsewhere" (Simmel; 1904, p. 136). The methodological move from anthropology to economics here is characteristic for the formation of early social theory. Also, the strong interest in temporal structures (partly influenced through Bergson's durée, the natural milieu of a person's "deep self, or the true foundation of one's spiritual identity") and accelerated rhythm of modernity leads Simmel to a contemplation of sartorial transitoriness.

In the last of his four essays on fashion, "Die Mode" (Fashion, 1911), he explains how wider acceptance and distribution of a fashion herald its demise, since a widely accepted dress code no longer poses to the individual a challenge that is associated with the constitutive process of fractious assimilation. Accordingly, a novel form or style of clothing needs to be introduced to generate anew the dualities of innovation and imitation, social separation and inclusion. As soon as fashion manages to determine the totality of a group's appearance-which has to be its ultimate creative and economic aim-fashion will, owing to the logical contradiction inherent in its characteristics, die and become replaced. And the more subjective and individualized a style of clothing is, the quicker it perishes. For Simmel, this transitory character of fashion remains its essence and elevates its material objects to transhistorical significance. "The question of fashion is not 'to be or not to be'," he concluded in 1911, "… but it always stands on the watershed between past and future" (Simmel: 1911, p. 41).

Frisby, David. Fragments of Modernity: Theories of Modernity in the Work of Simmel, Kracauer, and Benjamin. Cambridge, U.K.: Polity Press, 1985.