The term "hemline" entered fashion-speak in the 1930s. Prior to that time, the fashion press referred to skirt lengths and, since the 1920s, when hems first became a focus of fashion, slavishly reported on how many inches above the floor the latest season's models were hemmed. While the press and fashionable women of the twentieth century obsessed about hemlines, throughout most of Western fashion history, skirt length was not an issue. Skirts reached the floor, except in clothing worn by members of the working class whose shortened garments facilitated their work, and, for brief periods of time during the 1780s and 1830s, when ankles were revealed. The history of the hemline is then one of twentieth-century dress, when the raising and lowering of women's skirts made headlines, occasioned protest marches, and served as a symbol of revolution.

Designers and couturiers first raised hemlines several inches above the floor in 1915 when they created the wartime "crinoline" with a full, shortened skirt. Many women greeted this new look with pleasure and saw it as more practical and better suited to a time when women were entering the workforce at unprecedented levels. After the war, as skirt lengths continued to rise-ten to twelve inches above the floor in 1925 to fifteen inches in 1927-so did the outrage against them by more conservative parties such as religious leaders, politicians, and university presidents, who tried to preserve the moral order of the previous century when women did not smoke or bob their hair and stayed at home to raise a family. The New York Times reported on 27 December 1925 that Mrs. John B. Henderson, a prominent Washington hostess announced the inauguration of a campaign to reform modern tendencies in dress and that, following the efforts of high dignitaries of church and education, her movement would frown on cigarette smoking by women and call on them to abandon immodest attire. However, changes in society accelerated by World War I fostered increasing economic independence for women and a focus on youth culture with which the shorter skirts became identified; thus the fashion for short skirts prevailed. In fact, attempts by designers to introduce longer skirts between 1922 and 1924 were met with protests by many women who felt the shorter skirts were more youthful and modern.

Skirts continued to rise until 1927, when they reached just below the knee. Not surprisingly, in the following year, designers began to lower hemlines, sensing that women were more amenable to change than they had been in the early 1920s. This news was a relief to textile manufacturers, to whom one inch of added skirt length meant they could sell millions of yards of additional cloth. While manufacturers heralded this change, consumers protested. The New York Times reported on 27 October 1929 that some women claimed that the effort to put them back in long skirts was "an insidious attempt to lure women back into slavery." Other, more practical women refused to discard their current wardrobes in which their hemlines could not be lowered to the new fashionable standard, and buy new garments.

During the 1930s, hemlines did fall, but only for evening dress did they reach the floor. Women continued to wear shorter skirts during the day, now hemmed just above the ankle. This long, lean silhouette prevailed until the war years when regulations like L-85, issued by the U.S. government in April 1942, set skirt lengths at 17 inches above the floor and regulated other aspects of the cut of garments in an effort to conserve textiles. Evening dress remained more feminine, with floor-length full skirts made of tulle and marquisette that were not regulated under L-85. The "duration" silhouette survived throughout the war and suited women who, in even greater numbers than during World War I, entered the workforce and supported their families.

Following the war, the French designer Christian Dior brought the focus of fashion back to Paris when he introduced his 1947 collection dubbed "The New Look" by Carmel Snow, editor of Harper's Bazaar. The collection featured long, very full skirts that were a complete reversal of the wartime silhouette. While many greeted Dior's new look with pleasure and a chance to regain their femininity, others protested the profligate use of material after the deprivations of the war. Despite the protests, the New Look gained popularity on both sides of the Atlantic and helped revive the fashion industry in Paris. Dior became known as the tyrant of the hemlines, and he and his fellow couturier's collections were avidly followed and their efforts to raise and lower hems of singular importance to fashionable women.

By the beginning of the 1960s, couture's fashion dominance began to diminish. American and Italian designers had more prominence and the postwar, baby boom generation was beginning to reach their teen years and enjoy an independence and economic freedom not known in the past. Their rejection of their parents' look, exemplified by the Paris couture, led to an increasing interest in street fashion. Young designers, especially those in London, began to introduce clothes more suited to their generation. Mary Quant opened her own boutique on Carnaby Street in London in 1955, and when she couldn't find what she wanted wholesale, she began to design her own pieces, featuring short skirts worn with tights. Skirts continued to rise throughout the 1960s, and by 1966, the miniskirt was at the height of its popularity with the young. By 1968, most established designers in New York and Paris showed short skirts as well.

Of course, as in the 1920s, this evolution in fashion caused an uproar among the more conservative members of society. Also, as in the 1920s, designers tried to reintroduce skirts with longer hemlines, the midi and the maxi, and met, this time, with fierce resistance. 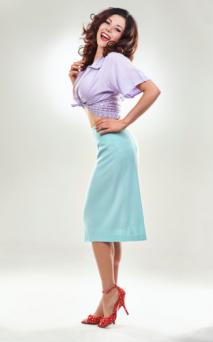 In 1970, designers, along with manufacturers and retailers, introduced the midi-skirt, originally defined as anything hemmed below the knee or above the ankle. An intense marketing campaign was waged, in which retailers such as Bergdorf Goodman forced their salesgirls to wear the new-length skirt. Despite the effort, most women rejected the midi, refusing the dictates of fashion designers and retailers. Women organized into groups such as POOFF (Preservation of Our Femininity and Finances), FADD (Fight Against Dictating Designers), and GAMS (Girls Against More Skirt) to protest the new look and encourage others to not buy the midi.

Although longer skirts prevailed in the 1970s and shorter skirts in the 1980s, since the battle of the midi, the length of a women's skirt is no longer dictated by fashion designers but rather is a personal choice.

Most fashion histories do not address the story of hemlines in any depth. The best source of information is to be found in newspapers and magazines that covered its month-to-month and even day-to-day rise and fall. The source most easily searchable is the New York Times. Articles that proved particularly useful in writing this history are included below.