At the U.S. Conference of Mayors on 21 May 1997, President Bill Clinton triggered a media furor on both sides of the Atlantic with his comments about the dangers of so-called heroin chic in contemporary fashion imagery. "You do not need to glamorize addiction to sell clothes," he asserted. "The glorification of heroin is not creative, it's destructive. It's not beautiful, it's ugly" (White House Briefing Room p.1). The photographs in question showed emaciated models, eyes half-closed, skin pale and clammy, heads twisted in apparent abandon against a backdrop of seedy, anonymous hotel rooms and dirty apartments. Clinton's fears had been heightened by fashion photographer Davide Sorrenti's death at twenty-one, from a drug overdose on 4 February 1997. The gap between image-makers' and models' real lives and constructed fashion photographs blurred. Since the 1970s fashion designers' struggles with drug addiction, for example, Yves Saint Laurent and Roy Halston, had been related alongside discussions of their work and influences. In the 1990s media coverage merged actual drug abuse and fashion scenarios created to suggest decadent and nihilistic rejections of conventional notions of beauty. Clinton decried what he saw as fashion's glamorization of heroin use, and his words were reinforced by fashion journalists such as Amy Spindler of the New York Times, who felt that fashion insiders were irresponsible, that they ignored drug use by models and photographers, and that they made images that spoke of dark addictions in order to promote clothing and fashion ideals.

The ensuing media debate was further fueled by revelations of heroin abuse within the fashion industry. It is notable, though, that heroin chic existed only at the level of representation, in photographs and in styling for cat-walk shows, rather than in actual clothing. It was a conjuring of signifiers that were frequently intended to evoke a more realistic idea of beauty and which its creators felt linked to their everyday lives in a way that more traditional fashion photographs, which relied upon sanitized visions of artificially enhanced perfection, never could.

This realist aesthetic had evolved since the early 1990s, with the London-based photographers Corinne Day and David Sims, and German-born Juergen Teller highly influential in its formation. They worked with like-minded stylists, most importantly Melanie Ward (with Day) and Venetia Scott (with Teller), who sought out secondhand clothes to mix with designer and high street garments to create a mood or atmosphere that related to their own experiences. Their work responded to post-rave youth culture, disenchantment with politics, and the impact of the global recession. It drew upon the intensity and fluidity of the rave scene and the darker obsessions and sense of alienation of rock bands such as Nirvana.

They were influenced by 1960s and 1970s fashion photographers who had experimented with notions of morality and acceptability, such as Bob Richardson and Guy Bourdin, and combined their images' often jarring, filmic quality with the raw emotion and intimate expositions of Larry Clark and Nan Goldin. In the 1990s, fashion photographers locked into a tradition of documentary photography that drew significance from traces of the everyday and sought to express the intensity of the moment. Goldin and Clark had both photographed real scenes of sex and drug use. They used the camera as a visual record, an external memory of their lives, and that is what 1990s photographers-Sorrenti, Teller, and Day-integrated into their own work.

They mainly worked for style magazines such as The Face, Dazed and Confused, and i-D in London, and therefore drew a young audience that responded to the stripped-down settings and light touch of Ward's and Scott's styling, which created outfits that seemed to have been thrown together from old favorites rather than crisp, new clothes. The models they chose, Emma Balfour, Rosemary Ferguson, and Kate Moss among them, were skinny and androgynous, and embodied a challenge to the more Amazonian physiques of previous models. However, their thinness at times seemed acute, and their glazed, Vaseline-lidded eyes and pale faces were jarring among glossier beauty ideals shown in advertisements in the same magazines. 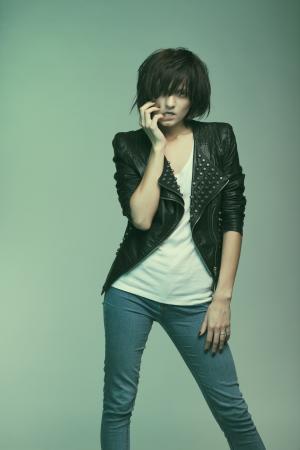 Although other areas of culture were equally preoccupied by images of youthful rebellion, through drugs and partying, the models' fragile bodies appeared bruised and vulnerable. Their delicate features seemed blurred by smudged makeup and incongruous in the context of dirty rooms or overgrown countryside. They recalled the emaciated style shown in the 1981 cult film, Christiane F., which depicted the life of a teenage heroin addict. Models were often shown lying prone, perhaps asleep, perhaps passed out.

Irvine Welsh wrote about heroin addiction in Trainspotting. Films, such as the one inspired by his book made in 1996; Drugstore Cowboy, 1989; Pulp Fiction, 1994; and The Basketball Diaries, 1995, were all far more graphic in their scenes of drug abuse; they were also able to show their protagonists' suffering and turmoil. Fashion images, however, presented snapshots that covered perhaps eight magazine pages, a mini-narrative that was ambiguous, with drugs never actually explicit but implied to some onlookers by gestures, settings, and facial expressions.

By the time Clinton spoke out about so-called heroin chic, a term that had been circulating, along with "junkie chic," in the press for the past year, many felt the style was over, and fashion had moved on. It had been a strand within fashion that had grown up over the previous years, coming to fruition in 1993, as evidenced by, for example, fashion shoots for The Face of that year, and it gradually shifted, into more straightforward documentary work for Day and Teller, into a darker, more erotic fantasy for photographers such as Sean Ellis, or into more explicit imagery for Terry Richardson. Camilla Nickerson and Neville Wakefield's book, Fashion, Photography of the Nineties (1996), brought together many of the key images of the period and showed the breadth of the realist style, of which heroin chic was only a part. The outcry came as mainstream labels appropriated the aesthetic, Calvin Klein included, adding an edge to their brand. As it shifted context, and therefore reached a wider audience, heroin chic's suggestions of internalized violence and illicit pleasures became increasingly controversial. Heroin chic was a symptom of cultural anxiety, and fashion's contradictory position within Western culture meant that its exploration of uncomfortable themes of alienation, deathliness, and beauty were problematic, especially at a time when representations of reality and fiction were ever more blurred.