In the mid-1960s, the hippies-the rebels and dropouts of the Haight-Ashbury community of San Francisco-generated one of the most influential of history's dress reform movements. Their style was so outrageous and anomalous that it alone could have made the hippie movement impossible to ignore. As did their lifestyles, their fashion built upon San Francisco and California's tradition of iconoclasm; important, too, was the precedent provided by the young ready-to-wear designers of London, whose international impact began in the late 1950s.

The hippies' protest against capitalist society informed their impunity to all received strictures or etiquettes about clothes. They coordinated garments so that harmonies and homogeneity were fractured. Mad, anarchic mélanges resulted. They simulated acid phantasmagoria in their color schemes and paraded recycled old clothes, proclaiming them not as cast-off rags but proudly worn pedigree. They disguised and revealed themselves in costumes that were avatars of theatrical or historical or mythological identities, rather than the easily legible roles recognized by contemporary society. Their clothes were a paean to sexuality and sensuality: texture and tactility were foregrounded in their favorite fabrics, which ranged from slinky satin and stretch to all variety of embroidered and figured surfaces. Sometimes their fashion became not a second skin, but the exposure of their own nude bodies, painted and patterned in tribal fashion; this was a celebration of instinctual expression that they believed had been obliterated by industrialization.

The hippies built on the generic silhouettes that prevailed during the 1960s-the miniskirt, the pantsuit-but they transmogrified Mod fashion at the decade's midpoint by the way they put their clothes together, by their choices of fabric, and by the way they accessorized. Folkloric motifs, style, and fabrics were ubiquitous in hippie fashion. Their adoption of long peasant skirts helped move fashion back to longer hemlines. The generally loose and unconstructed silhouette of the 1960s became even more flowing with the adoption of mideastern tent shapes. The hippies' infatuation with the ensembles of Native Americans demonstrated solidarity with their plight as well as well an aesthetic appreciation.

Another prong of hippie fashion likewise proclaimed common cause with the workers of the world: this was the utilitarian fare that came to be known as "anti-fashion." It was fashion at its least overly decorative, most rugged, and basic: blue jeans worn with T-shirts, work shirts, and other commonplace attire. Decorative appeal was provided instead by the contours outlined by these body-clinging garments. Thus the youthful counterculture promulgated an allure that could not be achieved by expenditure alone.

The hippies generated an ecological consciousness of fashion by their recycling of vintage clothes as well as their cannibalizing of old fabrics and hangings, out of which they cut new garments. They drew attention to the way that all clothes costume the wearer into roles, some-businessman, housewife-so integrated into the warp of society that they were no longer recognized as constructed characterization. Their pacific appropriation of military uniform likewise showed a determination to mock and denature the pieties vented by the opposite side of the ideological divide.

Los Angeles, New York, and London also became important citadels for hippie fashion. On Los Angeles's Sunset Boulevard and in New York's Greenwich Village were clustered constellations of independent boutiques. London's contribution to hippie fashion was indebted to the art and crafts movement of a century earlier. More than San Francisco, the city's secondhand clothes stores and bazaars were more likely to be filled with heirloom couture. London raided its storage vaults, disgorging into the city's auction house fabulous caches of vintage clothing as well as theatrical and ballet costumes. 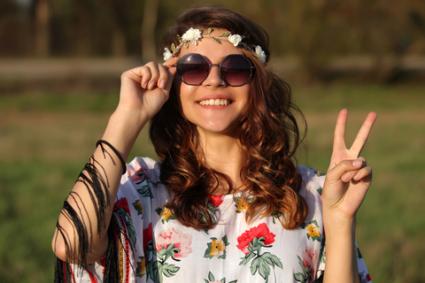 "We got pretty scathing about store-bought hip that didn't come from the soul," said Linda Gravenites (interview with the author, November 1986), who made clothes for many residents in the Haight-Ashbury community and the rock bands based there. Nevertheless the purists or the ideologues were powerless to stop the inevitable co-opting, the proliferation of hippie fashion within the mainstream fashion industry. From 1967 to 1971, the hippie's fashion was grist for the couture and upscale ready-to-wear mills. The "rich hippie" look upgraded hippie style into fabrics that were largely well beyond the economic reaches of the financially marginal denizens of Haight-Ashbury.

The fashion of the hippies was as much threat as influence to the fashion establishment. The hippie's open-ended pluralism threw down the gauntlet to the seasonable revisions proffered to women by the mainstream fashion industry. Savoring vintage garments established a continuum between past and present, a rejoinder to the forced amnesia of customers told that each year marked a tabula rasa of consumption.

Perhaps what above all made hippie fashion so subversive to the mainstream industry was its tacit message that the time had come to abolish the fashion designer. It resonated as well with the burgeoning women's liberation movement: women would no longer be told what to wear by a designer, who was usually male. After Rudi Gernreich decided to close his ready-to-wear business in 1968, he told reporters that he was now disenchanted by clothes that bore the imprint of the individual designer. The very act of designing, in fact, seemed to him to be an a priori dictate that no longer fit the needs and aspirations of the clothes-wearing public.

With every question of identity in Western civilization of the late 1960s being debated, fashion exploded with costume and fantasy, thanks in large part to the inspiration provided by the hippies. "Today nothing is out, because everything is in," Marshall McLuhan wrote in 1968. "Every costume from every era is now available to everyone." (Harper's Bazaar, April 1968, p. 164)

Hippie fashion continued to steep throughout fashion during the 1970s. Even as fashion retreated from the utopian threshold advanced during the late 1960s, the hippies' ideas were disseminated to many more people than they had been during the 1960s. By the end of the decade, it seemed to have become exhausted. But since the mid-1980s, hippie style has enthralled designers and the public again and again, becoming a recurrent influence in every echelon of fashion.

Reich, Charles A. The Greening of America: How the Youth Revolution Is Trying to Make America Livable. New York: Random House, 1970.