Our knowledge of dress in pre-Islamic Iran comes from pictorial depictions mainly on rock reliefs, metalwork (including coinage), seal impressions, and, from about the second century C.E., wall paintings. Information is fragmentary and episodic, and relates to the ruling households, the military, divinities, and occasionally priests; depictions of women (even female goddesses) are rare. 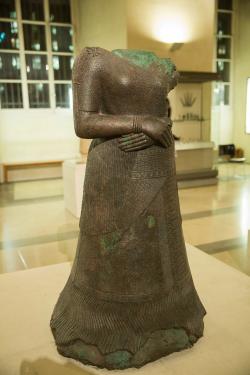 In its heyday the Elamite empire controlled the region from eastern Mesopotamia to central Asia and Pakistan, but after 1100 B.C.E. its political influence waned. Early Elamite cylinder seals show bearded men (possibly princes or priests), wearing multi-layered skirts-perhaps of hanging feathers, leather strips, or sheepskin-similar to those found in certain votive statues from Mari (an ancient Syrian city), and clay tablets reveal that wool and flax were being exported to neighboring lands. A few seals (c. 2200-1600 B.C.E.) include female figures wearing similar but fuller skirts. However, a bronze statue (now in the Louvre) of Queen Napirasu (d. 1333 B.C.E.) from Susa shows a diagonally necked bodice with elbow-length sleeves, a long, bell-shaped skirt with wide decorated bands around the hips and down the left front, fabric flaps on the right hip, and a deep fringe (possibly of sheep wool) around the hem. Later Elamite rock reliefs (e.g., Kuh-i Farah, c. 800 B.C.E.), although seriously eroded, record ankle-length, long-sleeved robes worn with projecting shoulder collars.

The Persian Achaemenid family triumphed over the Medes of northwest Iran, seizing land stretching from the Balkans to the Tian Shan mountains in central Asia and China, until its destruction by Alexander the Great. The ceremonial capital of Persepolis provides most costume pictorial evidence; scholastic opinion is divided regarding whether details on the so-called Oxus Treasure (British Museum) and surviving clothing from other central Asian sites such as Pazyryk should be considered Iranian Achaemenid or central Asian dress. 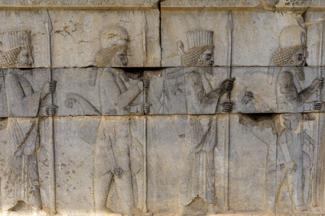 The Persepolis reliefs and the Susa tile revetments (Louvre) reveal nothing of women's and children's dress but show two distinct male costumes: the "Median" dress of long trousers tucked into ankle boots, a tunic under a knee-length, a long-sleeved coat (kandys) draped over the shoulders, and a rounded soft cap encircled by metal fillet; and the "Persian" dress of an ankle-length, draped skirt, a top with four deep pleats at the elbow, and a tall, fluted cap (possibly of feathers or padded felt). It is this latter garment that has provoked discussion. Rejecting a theory from the 1930s that the garment was made of an unseamed rectangle of fabric folded on the shoulders and belted to form drapery folds, Anna Roes argued for a sophisticated construction of two separate pieces: a waist-length cape with a triangular insert at the elbow creating four sleeve pleats, and a sari-like skirt with hanging fabric bands down the front, back, and sides. Two decades later, P. Beck (1972) proposed another structure based on two lengths joined at the shoulder, both differently cut to produce the curves and pleats of the distinctive sleeves. Neither theory is entirely satisfactory regarding the skirt as detailed on seated figures. At court, men's hair was worn behind the ears to shoulder-length, tightly curled, while the beards (which may have been false) were carefully arranged into ringlets, interrupted by rows of tight curls.

The various Silk Roads crossing Asia flourished in the Parthian period, bringing Chinese silk to the West in exchange for horses, wool, and linen. Short-staple cotton was perhaps being cultivated in eastern Iran but was available from east Africa and the Persian Gulf regions. Most detailed information about the dress from this period is gleaned from pictorial art from the ancient cities Palmyra, Dura Europos, Hatra, and Nimrud Dag-as well as from central Asian regions of ancient Syria, ancient Iraq, and ancient Anatolia-but modern specialists in these regions often evaluate such clothing as "national" rather than Parthian "imperial" dress. 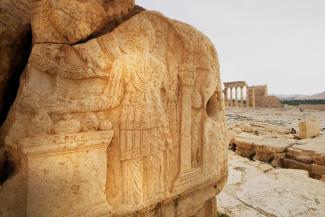 The man of rank wore a hip- or thigh-length belted tunic with narrow, long sleeves, although the Palmyran sculptures show a long fabric tie, knotted and looped. There were various methods of fastening tunics, possibly denoting differences in rank, status, or, perhaps, office: wide diagonal openings right to left, small and deep rounded necks, square necks, and extended neck lapels fastening below the front left shoulder. The tunic sometimes had heavy drapery folds forming a U-shaped apron, and a long-sleeved, calf-length, narrow-fitting jacket was worn over this. Loose trousers, often heavily patterned and banded down the center of the leg, were gathered at the ankle or into calf-length boots. A long folded stole, or strip of silk, on the left shoulder, shown on figures in some images, may indicate priestly attire. Regarding head covering, gods, kings, and generals (as those at Hatra and Nimrud Dag) are shown with tall helmets with a narrow front profile, decorated with "pearl" beading.

Information regarding female attire is sparse. The Greek chiton is said to be the inspiration behind the Palmyran dress, but ladies' bodices in Khaltchyan wall-reliefs are close-fitting with a deep or shallow neck, with additional material flaring from the breast band. Below this a trailing pleated skirt was worn, and a long, wide stole covered the shoulders or was draped over the arms.

From the fifth century, Iranian cotton was being exported to China along with linen flax and wool. Chinese imperial histories record that silkworms were smuggled into central Asia in 419 C.E., but the Arab histories and Iranian poetry suggest sericulture was established in Sasanid lands around 300 C.E.. Draw-loom technology was known from eastern Mediterranean lands, but most dress fabrics were still made on the narrow back-strap loom. Tapestry (slit) weave and compound twill weave are mostly associated with Sasanid wool and silk dress fabrics, respectively.

The rock carvings near Shiraz show shahs in fitted bodices, perhaps of molded leather, together with full-length trousers or chaps with long wavy curls of either sheepskin or very fine fabric. By the mid-fourth century a draped apron-like tunic, reaching to the lower calf in front, was worn, and some later silver dishes depict another type of tunic with stiffly pointed side corners. By the late fifth or early seventh century-depending on the date of a carving at Taq-i Bustan-the royal dress was a long-sleeved, knee-length tunic in heavily patterned woven silk, or decorated with padded appliqué forms; the belt had hanging lappets signifying status (the more numerous, the higher the rank). A double row of beading decorated the central front fastening, neck, cuffs, and hem edges. Underneath, ample trousers were gathered into soft ankle boots fastened with long ribbon ties. Each shah wore a distinctive crown often incorporating a large "balloon" (possibly of hair), while princes and generals had tall caps with a slight Phrygian curve ending in a bird or animal head, or decorated with a stylized emblem.

A few images of the Zoroastrian goddess, Anahita, and court entertainers provide most information about women's dress. In a late-third-century relief at Naqsh-i Rustam, Anahita has an ankle-length robe, falling in diaphanous folds and girded by a creped ribbon belt. However, at Taq-i Bustan, carved at least 150 years later, her long-sleeved robe falls from a shoulder clasp with a sleeved coat (possibly felt) draped over her shoulders. Her tall, tasseled headdress is more elaborate than those of female musicians in the hunting compositions beneath. On Sasanid metalwork female dancers are noticeable for their long stoles draped across the front at hip level. In the rare depictions of royal ladies, the dress is similar to those of Anahita, while the children wear miniature versions of the regal ensembles.

In Sasanid times, Zoroastrianism was officially promoted, and Zoroastrian priestly dress was probably formalized in this period. Ritual regulations concerning the lambswool kusti (girdle) and cotton sudra (shirt), worn by all adult believers, were also probably codified during this period.

Beck, P. "A Note on the Reconstruction of the Achaemenid Robe." Iranica Antiqua 9 (1972): 116-122. Refers to earlier garment-structure theories, with bibliography.