Prior to the 1800s, Japan was a nation isolated from the West. The arrival of its wares in Europe and America in the second half of the nineteenth century precipitated a new creative surge in art and design that became known as Japonisme. While many scholars have studied the influence of Japonisme, or the assimilation of Japanese aesthetic principles on European painting and decorative arts, few have addressed its influence on Western dress. And yet fashion, which differs from traditional dress in that it stresses urbanity and constant change, eagerly absorbed the principles of Japanese design.

In the mid-nineteenth century, European and American garments were ornamented with Japanese motifs or made of fabrics exported from Japan while conforming to fashionable Western silhouettes. Later, in the early twentieth century, some costume items, ranging from tea gowns to opera coats, were constructed with elements adapted from the construction of kimonos. More recently, some of the world's most influential designers have emerged from Japan to redefine contemporary fashion.

Although some Japanese objects had been arriving in Europe since the 1600s, it was not until after the American commodore Matthew Perry opened this island nation to international trade in 1854 that Japonisme began in earnest. Its popularity accelerated when many Europeans and Americans saw Japanese artworks and design objects for the first time at the world's fairs of 1862 in London, 1867 in Paris, and 1876 in Philadelphia. These expositions exerted a profound influence on innumerable nineteenth-century artists, artisans, designers, and manufacturers. Everything from paintings to porcelain began to be produced in the Japanese manner. In the 1870s and 1880s, such designs-then considered avant-garde-developed into a distinctive style that came to be associated with the aesthetic movement.

While nineteenth-century critics had reservations about artists' adopting Japanese conventions in paintings and prints, this was not true in the arena of fashion. French textile designers in the 1890s, for example, readily appropriated new and "exotic" floral motifs from Japan, and these fabrics were readily used by couturiers like Charles Frederick Worth. The most popular item of dress exported to the West in the late nineteenth century was a modified version of the kimono, worn as a dressing gown. Both fully finished garments and unsewn components were sold at small boutiques and at large firms such as Liberty of London. Kimonos for export were often constructed with elements to suit the European market; these might include a set-in box pleat to accommodate the bustle; a collar lining instead of an under kimono; the addition of a knotted and tasseled trim; and a variety of sleeve styles.

In the decade prior to World War I, the construction of women's garments began to change dramatically. As early as 1908, revolutionary couturiers, such as Marie Callot Gerber and Paul Poiret, took inspiration from the drapery-like quality of kimonos. Loosely cut sleeves and crossed bodices were incorporated into evening dresses, while opera coats swathed the body like batwinged cocoons.

One of the twentieth century's greatest couturiers, Madeleine Vionnet was inspired by the kimono, with its reliance on uncut lengths of fabric, and raised dressmaking to an art form. From the onset of World War I to the late 1920s, she abandoned the traditional practice of tailoring body-fitted fashions from numerous, complex pattern pieces, and minimized the cutting of fabric. A "minimalist" with strict aesthetic principles who rarely employed patterned fabrics or embroidery, Vionnet relied instead on surface ornamentation through manipulation of the fabric itself. For example, the wavy parallel folds of a pin-tucked crepe dress evoked the abstracted image of a raked Zen rock garden, itself a metaphor for the waves of the sea. 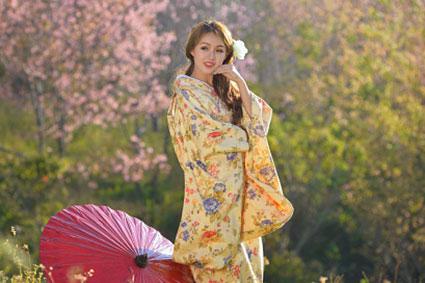 Although the influence of the kimono on the construction of garments was extremely important in the 1910s and 1920s, surface ornamentation remained a vital force. During the art moderne, or art deco, era, French textiles in the Japanese style developed a more sophisticated use of both abstract motifs and recognizable images. Examples range from metallic lamé dresses that replicate the appearance of black lacquer inlaid with gold particles, to garments of brocaded silk woven with a pattern of crashing waves and fish scales. Also appropriated was the mon, or family crest. While the mon is usually an abstracted image drawn from nature, such as a bird or flower, it can also represent a man-made object, such as the nara bi-ya, or parallel rows of arrows; or celestial bodies such as the mitsuboshi, an abstraction symbolizing the three stars of Orion's belt.

The influence of "exotic" cultures on fashion began to diminish in the late 1930s. Instead, American and European designers created modern versions of historical Western dress, and this trend dominated fashion from the late 1930s through the 1950s. The revival of historical styles offered an escape from the pressures of the Great Depression of the 1930s and helped assert the growing sense of nationalism in Europe at that time. Also a factor in the United States was strong anti-Japanese sentiment during and after the war. Nonetheless, some of this country's most innovative designers remained open to Japanese influence. One of the best was Elizabeth Hawes, who designed a variety of Asian-inspired garments in the late 1930s and early 1940s using modern Japanese kimono fabric.

The use of Japanese elements became the cornerstone for another revolutionary American ready-to-wear designer, Bonnie Cashin. Born in California in 1915, Cashin was one of a handful of female American designers who made clothes for the modern and active woman. By using the loose construction of the nakajuban, or informal kimono worn by peasants, and discarding Western tailoring, Cashin created functional fashions that fit a broad range of sizes and later seemed decades ahead of their time. Not only were her garments in sharp contrast to the couture creations of her French contemporaries, they had little in common with the designs of her American counterparts. Cashin's use of indigenous Japanese textiles, like double ikat silks with their subtle geometric designs, did much to advance the notion of modern luxury in American fashion.

Although by 2004 Japonisme was no longer a major force in fashion, the influence of Japanese design and aesthetics continued to be important. One of the main reasons was the dramatic impact of creators such as Issey Miyake, Rei Kawakubo, and Yohji Yamamoto. Born just before and during World War II, they became some of the most important fashion figures to chart a new course since the 1970s. Their use of oversized silhouettes, cutting-edge textiles, and the appropriation of Japanese aesthetic principle like sabi/wabi have made them leaders of the avant-garde. 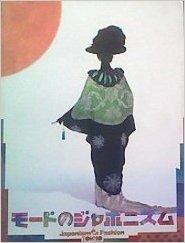