Karl Marx was the major critic of capitalism in the nineteenth century, and he proposed, in its place, a society organized around need rather than profit. One of his main works is a three-volume study called Capital, which is a study of the political economy of capitalism. Fashion is at the core of Marx's political economy. Marx identified "modes of production." These are successive epochs of technical and social arrangement, which alter the organization of production and consumption. These modes have something of fashion's logic about them, if fashion is taken to be the latest trend, against which all else is considered outmoded. More specifically, in Marx, fashion's rhythms equate with the breakneck pace and whimsicality of industrial capitalist production, which Capital indicts: "The murderous, meaningless caprices of fashion" (1976, p. 609), employing and dismissing workers at whim, are linked to the general "anarchy" of capitalist production. Marx mentions "the season," with its "sudden placing of large orders that have to be executed in the shortest possible time" (1976, p. 608). This phenomenon intensified with the development of railways and telegraphs. Marx quotes a manufacturer on purchasers who travel every two weeks from Glasgow, Manchester, and Edinburgh to the wholesale warehouses supplied by his factory. Instead of buying from stock as before, they give small orders requiring immediate execution: "Years ago we were always able to work in the slack times, so as to meet demand of the next season, but now no-one can say beforehand what will be in demand then" (1976, p. 608). Employment and livelihood are dependent on fashion's vagaries.

Not simply analog to the rhythm of the capitalist mode of production, fashion-or clothing-was, for Marx, the very generator of the Industrial Revolution. The textile industry inaugurated the factory system of exploitation. In the cotton mills of the mid-nineteenth century, men, women, and children labored cheaply, six days per week, spinning materials harvested by slaves in the United States. In the silk mills child labor was even more grinding: ten-hour shifts and exemption from otherwise compulsory education. The need for a light touch when working with delicately textured silk was apparently only acquired by early introduction to this work.

In another vein, Marx deployed fashion metaphorically. Discussing the first French republic, he noted how it "was only a new evening dress for the old bourgeois society" (1992, p. 48). Elsewhere, Marx described the reactionary nature of the French politicians who were establishing modern bourgeois society. They adopted "Roman costume" and "Roman slogans" (1992, p. 147). These are "self-deceptions" necessary "to hide from themselves the limited bourgeois content of their struggles and to maintain their enthusiasm at the high level appropriate to great historical tragedy" (1992, p. 148). Here costume is suspect, donned to dissimulate.

Marx's thoughts on fashion as motor, product, and metaphor of the capitalist system are echoed in the work of the German cultural critic Walter Benjamin (1892-1940). Benjamin analyzed modernity, focusing on how technology and urbanization alter experience, and, specifically, how cultural forms are affected by mechanization, industrialization, and capitalism. According to Benjamin, fashion's tempo is driven by capitalism. Capitalism needs constant novelty in order to keep sales buoyant. Benjamin named this tempo the "eternal recurrence" of the "new" (2003, p. 179). Simultaneously, Benjamin observed a modern drive toward uniformity and mass reproduction, exemplified by the standardization of women in the song-and-dance revues. Here rows of girls were identically dressed and made up, and they danced in formation. Such cabaret entertainment was extremely popular in Weimar, Germany, and along with fellow critic Siegfried Kracauer, who wrote of such shows as a cultural equivalent to the predictable and mechanistic movements of the Fordist conveyor belt, Benjamin regarded such presentation of women as socially significant. Likewise, a vignette in The Arcades Project noted a 1935 fashion craze: women wore initial badges made of metal, pinned to jumpers and coats. The fashion accessory signified both the alienating reduction of self to alphabetic cipher and the loss of privacy in a crowded world. Developing Marx's notion of commodity fetishism, Benjamin also analyzed fashion as a seducer of living humans into fashion's dead, inorganic world of materials and gems. Capitalism makes people increasingly thinglike; fashion dramatizes this transformation. 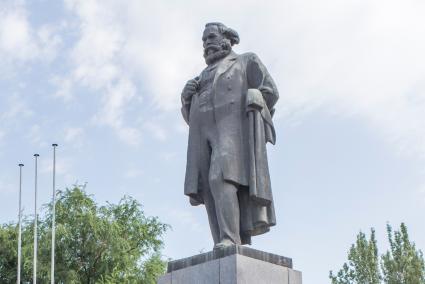 Peter Stallybrass's essay "Marx's Coat" develops Marx's theory of commodity fetishism in relation to the coat as useful object and as commodity or "exchange-value." He recovers the "use-value" of a coat through an examination of Marx's frequent pawning of his own overcoat, an event that prevented Marx's research in the British Library, as he could not gain entry without such a garment testifying to his respectability. Significantly, Marx called the poorest class the lumpenproletariat; lumpen means cloth rags. As Stallybrass shows, for the poor, even the shirts off their backs had to be exchanged for a few pennies at the pawn shop, however essential for living these shirts were or however sentimental their value. Marx's attack on a system that made this sort of exchange necessary, notes Stallybrass, is an attempt to stand up for human dignity and memory as it is embodied in material. Indeed, Marx's materialism can be, in this way, quite concretely linked to questions of cloth material, its mode of production, and its human meaning.

--. "The Eighteenth Brumaire of Louis Bonaparte." In Surveys from Exile. Edited by David Fernbach. Translated by Ben Fowkes. London: Penguin, 1992.