Whether she is wearing navel-baring miniskirts, cone bras, or Gap jeans, Madonna has been a fashion leader since she became famous in the mid-1980s. As an icon of popular culture, she has set fashion trends and boosted the careers of established as well as up-and-coming designers. She has appeared on numerous fashion-magazine covers and has been a fixture at runway shows around the world. Her chameleonlike ability to regularly transform her look reflects both the ephemeral nature of fashion and Madonna's redefinition of femininity; her styles have encompassed everything from punk to androgynous, s-m, hip-hop, geisha, western, and military looks.

Born Madonna Louise Veronica Ciccone in Bay City, Michigan, in 1958, Madonna was one of six children raised in a strict Catholic home by her father; her mother died when Madonna was only five years old. Madonna was a cheerleader in high school. She acted in school plays and trained as a dancer. She attended the University of Michigan at Ann Arbor on a full dance scholarship but dropped out to pursue a professional dancing career in New York City in the late 1970s, where she studied with choreographer Alvin Ailey. Realizing that she instead wanted to pursue a career as a singer and actor, she worked as a model, sang in the band The Breakfast Club, and starred in low-budget films such as A Certain Sacrifice. Her first success on the music scene came in 1983 with the release of her self-titled solo album; she released over a dozen full-length albums through 2003's American Life. Although best known as a singer, the multifaceted entertainer has also starred in numerous films, including the 1991 documentary Truth or Dare, and Evita, for which she won a Golden Globe in 1996; has been featured in Broadway productions; and has authored several books, including the controversial 1992 coffee-table work Sex.

Madonna's highly individual style was apparent in her debut on Music Television (MTV) in 1984. In her videos for "Lucky Star" and "Borderline," she wore her own version of punk-black miniskirt rolled down to expose her navel, mesh knit tank tops with her brassiere peeking through, black lace gloves, stiletto heels, a "Boy Toy" belt, rubber bracelets, teased hair with an oversized bow, and heavy makeup. Madonna's look spawned "Madonna wannabes"-legions of mostly young girls who copied her early style. The craze only heightened with her appearances in the 1985 movie Desperately Seeking Susan and on the MTV Music Awards ceremony the previous year, when she wore a white lace corset and "bridal" ensemble accessorized with her "Boy Toy" belt and strands of pearls, writhing onstage and singing the title track from her second album, Like a Virgin. Retailers like Macy's created "Madonnaland" and other Madonna-themed boutiques that sold Madonna-licensed clothing and accessories. Her look pervaded street styles of the mid-1980s and appeared in advertisements for fashion brands such as Benetton. The influence of this early look was still evident in the 1980s-inspired styles that appeared on runways almost two decades later; the popularity of navel-baring garments has only increased with the rise of young performers like Britney Spears and Christina Aguilera donning the look.

Use of Past Fashion Icons

Madonna has looked to fashion icons of the past to create a persona. In her 1985 video for "Material Girl," she copied Marilyn Monroe's look from the film Gentlemen Prefer Blondes, in which Monroe wears a strapless, pink evening gown with matching long gloves, adorned with a lavish diamond necklace and earrings. She again resembled Monroe at the 1991 Academy Awards in her strapless, white, sequined Bob Mackie dress and Harry Winston diamonds. In the early 1990s Madonna imitated the androgynous look of the 1930s screen siren Marlene Dietrich, wearing menswear-inspired suits both in her videos, such as "Express Yourself," and while promoting her book Sex and her film Truth or Dare. For her 1990 video "Vogue," she mimicked the famous 1939 Horst P. Horst photo of the back of a woman in a loosely laced corset.

The corset became a dominant fashion theme in Madonna's look of the early 1990s. Madonna collaborated with the controversial couturier Jean Paul Gaultier for her 1990 Blonde Ambition world tour. Known for his fetishistic fashions, Gaultier designed Madonna's memorable pink corset with cone bra for her 1990 tour. Not only did Madonna's wearing of exaggerated foundation garments (sometimes worn under menswear-inspired fashions as in the "Vogue" video) toy with accepted notions of femininity, it also launched the trend of underwear as outerwear still prevalent today, seen on celebrities and in street fashions alike. 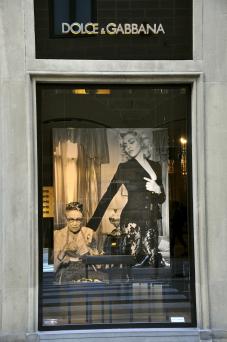 Madonna is known for befriending designers and for wearing and promoting the fashions of established as well as lesser-known designers. In addition to her collaboration with Gaultier, who also designed the neo-punk fashions she wore for her 2001 Drowned World tour, Madonna has worked with the Italian designers Dolce & Gabbana, who designed her clothing for the 1993 Girlie Show tour; she also wore their western styles in the videos and performances for her 2000 album Music. She was a friend to the late Gianni Versace, in whose 1995 advertising campaign she appeared, and she has often been seen in the front row of his sister Donatella's runway shows. Another close friend, the designer Stella McCartney, created a wedding ensemble for Madonna's 2000 marriage to the film director Guy Ritchie. Madonna has worn Azzedine Alaïa, Gucci, Givenchy, Alberta Ferretti, and Badgley Mischka, among others. She has also worn the fashions of designers before they were well known, such as Olivier Theyskens and Rick Owens, helping to boost their careers. In the fall of 2003 Madonna went from haute couture to mainstream, appearing in an advertising campaign for the Gap with the rapper Missy Elliot and wearing a white men's tank top, a newsboy cap, and Gap corduroy jean capris and a large amount of diamond jewelry.

Madonna's influence as a fashion leader has been consistent from the beginning of her career. Her style has been watched and followed from the moment she first appeared on MTV. She has launched style trends such as wearing navel-baring fashions and underwear as outerwear, affecting the clothing choices both of other celebrities and the public at large. Her continual repackaging of herself has reflected her evolution as a woman and a performer. She has worn haute couture, supporting both known and unknown designers, and marketed mainstream fashions, with her looks encompassing different personas. The ubiquity of her unique and highly individual style makes Madonna an icon of modern fashion.