Reenactors, referring to themselves sometimes as "living historians," are individuals who publicly recreate historical events and eras by donning historical dress and emulating period behavior. For most it is a hobby or pastime, occurring among all age groups and genders in varying locations around the world. People in the United States can be found reenacting the European medieval era, the American Revolutionary War, the early 1800s westward expansion, World War II, and other events. In the early 2000s the most popular era, judged by the frequency of reenactments and number of participants, is the American Civil War.

The best reenactors carefully craft the persona of individuals from the past. They refer to this activity as creating an "impression." To develop a credible impression reenactors must be authentic, which is indicated by the closeness to which a reenactor approaches exact replication of the "historical personage, place, scene, or event from the past" (Handler and Saxton, p. 243). Serious reenactors invest a great deal of time researching their historical impressions to ensure authenticity. In fact, achieving authenticity in reenacting is viewed as an "index of performance competence" (Turner, p. 127). Those who master authenticity are admired by their fellow reenactors, and those who do not are frequently ridiculed by their peers.

Replicating period material culture is an important necessity for achieving authenticity. In other words, dress and accessories must give every appearance of being from the past. For the sake of authenticity reenactors spend considerable time and money buying and/or creating costumes congruent with their historical personae. For example, a first-rate Civil War uniform, including trousers, jacket, shirt, underwear, shoes, and hat can cost several hundred dollars. In addition, accessories such as a musket, military leathers, and bedrolls can push the entire investment to well over one thousand dollars. Great care is taken to ensure that historical anomalies are not apparent in the reenactor's kit or ensemble. Some even go so far as to count the number of thread stitches per inch in a garment's construction. "The objects of reenactment become deeply treasured emblems of identity … The form these objects take is guided by a collective aesthetic … of painstaking detail and accuracy" (Turner, p. 126).

Why Do People Reenact?

Much of the scholarly literature on reenacting is focused on reenactor motivation. Allred regards reenacting as a postmodern "flight from an age of isolation and fragmentation into an age of community and shared ideals" (p. 7). Handler and Saxton also place reenacting in post-modern context, suggesting that "practitioners seek … an authentic world … to realize themselves through the simulation of historical worlds" (p. 243). Hall postulates that reenacting is a postmodern, nostalgic impulse in response to social, political, and economic turmoil of late capitalism. Turner sees reenacting as a public expression of self where the sense that reenactor's make of the past form "themes [for] self-examination" (p. 134). "For some [reenacting] is a political statement, for others an affirmation of cultural identity …individuals discover the themes that apply to themselves and their lives" (p. 130). For example, Belk and Costa find reenactors challenging a "number of American values such as reverence for nature, frontier as freedom, individualism, materialism, and statusless egalitarianism" (p. 32). 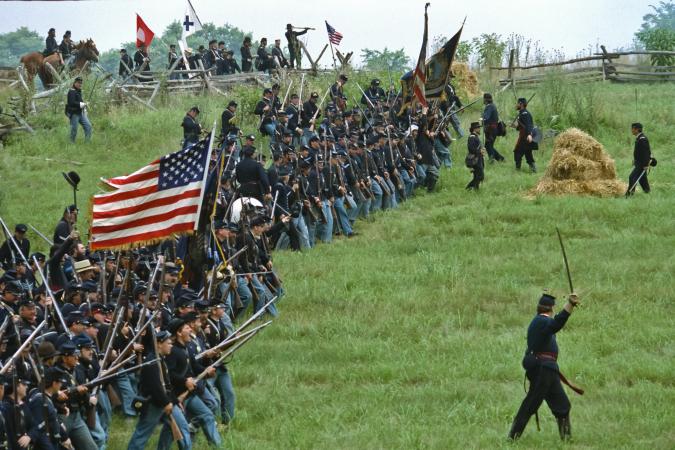 Most Civil War reenactments are local/regional affairs, taking place in park-like settings, attracting reenactors from the host state and surrounding region. Several hundred reenactors representing both Confederate and Federal armies typically participate together in an event. Throughout the year, a handful of national reenactments are also staged, where several thousand reenactors might convene. Most reenactments commemorate a specific Civil War battle; however, unlike the actual war, the events are generally conducted on weekends, with the arrival of the reenactors on a Friday evening. They quickly and efficiently establish separate Confederate and Union camps, characterized by an expanse of canvas tents and a multitude of cook fires. It is not unusual to see horses and cannons, representing cavalry and artillery. Separating the two military camps is usually a civilian camp, containing nonmilitary reenactors and sutlers who supply the reenactors with their "period" material needs. Saturday and Sunday activities entail military drills and staged battles. Other activities during the weekend might include a period religious service, recruiting rally, and military ball. By late Sunday afternoon, the reenactors break camp and return to their everyday lives.

There are many reasons why Confederate reenactors participate in the hobby. Strauss has identified several key motivations: a love of Civil War era history, an opportunity to play a role "larger than life," social bonding, and perhaps most disturbing, some reenactors express discontent with the outcome of the Civil War and the resultant erosion of white hegemony in the United States. Consider the reenactor from Michigan, whose eyes burned with intensity when he said, "I do this because I believe in what they believed in …my ancestors fought for the Confederacy" (Strauss 2001, p. 150).

Why would unhappy white hegemonists couch themselves within the hobby of Confederate reenacting? Because expressing whiteness, a subtle form of racism, publicly in a more overt manner can be problematic. In the United States overt racism is a stigmatic behavior, and to avoid stigma, Confederate reenactor expressions of whiteness are embedded within the pageantry of a widely accepted public pastime. In essence, Confederate reenactors are able to veil their protestations symbolically and keep them politically correct and publicly palatable.

Of all the elements used by Confederate reenactors to project themselves and their sense of whiteness, the importance of appearance in the form of dress cannot be overemphasized. Without the uniform, there would be no reenacting. The uniform is used to step into character and to drape history over the shoulders of the reen-actor. Without the uniform, the stage upon which history is replayed evaporates, and without the reenactor's stage the projection of the white self in a publicly palatable manner becomes virtually impossible.

Allred, Randal. "Catharsis, Revision, and Reenactment: Negotiating the Meaning of the American Civil War." Journal of American Culture 19, no. 4 (Winter 1996): 1-13.