The French poet and critic Stéphane Mallarmé was born in Paris in 1842 into a bourgeois family of civil servants. He was expected to follow into his father and grandfather's profession but, influenced by Charles Baudelaire and Théophile Gautier, he turned to writing poetry. After leaving school he went to England, and while in London, he married Marie Gerhard. They had two children, Geneviève and Anatole, who died at the age of eight.

Mallarmé taught English in Tournon, Besançon, and Paris until his retirement in 1893. Throughout Mallarmé's life his literary output was sparse and deliberate. His first poem was published when he was twenty-four. The famous "L'après-midi d'un faune" appeared in 1865, but between 1867 and 1873 his principal poems were left unfinished. From the 1880s he was at the center of a group of French artists that included Édouard Manet and Paul Valéry. Mallarmé died in Valvins, Seine-et-Marne, in 1898. His modernist masterpiece, "Un coup de dés jamais n'abolira le hasard" (A throw of the dice will never abolish chance), was published posthumously in 1914.

Mallarmé's relationship with fashion is marked by his association with the exponents of two literary movements of the late nineteenth century, the Parnassians and the symbolists. However, his is not the use of clothing or accessories as mere metaphors or symbols for character or sentiment, which occupied the literary output of his contemporaries. Mallarmé's singular contribution lies in his recognition of fashion as a social, cultural, psychological, and economic force in itself, and in the way in which this recognition finds poetical expression in different forms of writing, from occasional quatrain, via complex prose poem, to journalism. 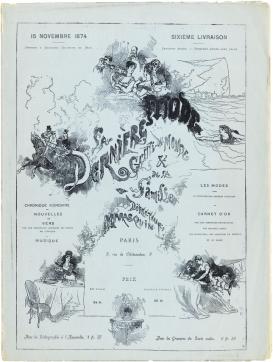 Mallarmé's artistic expression found its most potent voice in journalism. In the autumn of 1874 he single-handedly wrote and edited a magazine entitled La dernière mode (The latest fashion). It was composed of a number of stylistically well-defined columns on such topics as couture, accessories, and hair and makeup. The poet wrote each of these columns under different female pseudonyms, slipping easily into each mode and adopting, with a mixture of reverence and irony, various poetical voices as well as mannerisms of the commercial prose of the Second Empire.

Albeit short-lived-only eight issues were published before it went into receivership-the richly illustrated La dernière mode became a gesamtkunstwerk, a total work of art on fashion and style, crossing and quoting artistic disciplines in the spirit of the fin de siècle.

Mallarmé's development from a symbolist poet to a modernist writer, from an esoteric style to pared-down aesthetics, finds its unique expression in his attitude to fashion, to a mode dressing as well as sociocultural existence. There are, of course, a number of central subjects around which he built respective works, but fashion-with its haptic qualities, its shaping of the human form, and its metaphoric potential-appears as one of the most significant themes in Mallarmé's oeuvre. In what proved to be the last issue of La dernière mode (20 December 1874), he concluded, "No! for a compendium that intends to view fashion as art, it does not suffice to say 'this is what is worn'; one has to state 'this is the reasoning behind it'" (p. 2).

Here is Mallarmé's credo in regard to fashion. It is not simply an industry that creates material objects, nor is it a medium for a merely typified, gendered, or socialized representation. Fashion is a cultural form that demands critical investigation on a par with other artistic media, like plays, paintings, or novels. Moreover, it possesses a unique structure that lends itself to a redefinition of habitual rules and expressions. Mallarmé realized that, just as he used and reused a hermetic, musical vocabulary, where words take on very different meanings or are brought into an alternative syntax, so fashion invents its own forms anew each season. The look of a familiar piece of clothing is changed beyond recognition, or its use is radically redefined. As a structuralist before the advent of structuralism, Mallarmé found in fashion a willful and skillful reshaping of formal appearances, and thus a technique that he himself pursued from his early, fragmentary poems (such as "Hérodiade" of 1869) to the open spaces of his late, formal experiment, "Un coup de dés jamais n'abolira le hasard." 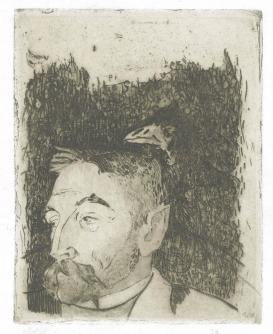 Mallarmé's work is characterized by a quest for pictorial composition and at the same time by a forceful rejection of the subject. In fashion he found both his visual stimulus, through the colorful, sweeping fabric of French couture between the 1850s and 1890s, and a subject matter that was regarded as marginal within the contemporary cultural hierarchy. The topic of fashion allowed Mallarmé to work against narratives, to remain resolutely subjective within the nonlinear, associative rhythms of his verses, but, simultaneously, to remove himself from the sublime, weighty subjectivism that was considered necessary for symbolist poetry.

La dernière mode ran a dialogue with imaginary correspondents, where the poet celebrated the "profound nothingness" that pervades the life and sartorial consumption of the bourgeois female. Unlike Gustave Flaubert, Mallarmé used the seemingly empty existence and ennui of a female readership not for narrative drama, as Flaubert did with the character of Emma Bovary, but for a concentration on formal questions. Fashion, seen as insignificant and ephemeral by the cultural status quo, thus becomes a carte blanche for a poetically elaborate, yet curiously precise, description of fabrics, ribbons, pleats, and folds, as the journal aimed at fulfilling its commercial function as a source of sartorial information.

The fold in particular operates, as pli modal-an abstract fold that primarily exists in semantic form-in a material analogy to syntactic or stylistic innovation. Thus, a notion is either hidden within the surface of a specific word, or else one word refers to another unknown one and needs to be drawn from the depth of the linguistic fabric through combinative or connotative efforts. Fellow poets credited La dernière mode with the "invention of the word" (Burty, p. 587); indeed, the vocabulary in the journal surpasses the mere description of clothes or accessories and moves to constitute fashion in the abstract, as a verbal equivalent of sartorial innovations in contemporary haute couture.

The professed independence from the material aspect of clothing, and the deliberate ignorance vis-à-vis stylistic minutiae, rendered La dernière mode less than commercially viable among competitive fashion journals. However, the formal yet radical nature of its prose (such as the metaphysical musings of Marguerite de Ponty in her column, "La Mode") and the irony of its stylistic quotations (repeated references by Miss Satin to Charles Frederick Worth and Émile Pingat) create a unique and extended text that floats unconstrained by a specific stylistic period. Indeed, the prose speaks as eloquently of the sartorial as of the literary form.

A further removal from the habitual approach of the artist to fashion, whether critical or celebratory, occurs through the exclusive choice of female pseudonyms. This technique was not new in itself. Honoré de Balzac and Jules Barbey d'Aurevilly, for example, preceded Mallarmé as "female" fashion journalists in the 1830s and 1840s. Yet Mallarmé does not hide behind or subsequently disavow his feminine personae but becomes them. A mental cross-dressing allows the poet to indulge in the transitory and ephemeral, unobserved by the patriarchal mainstream, and thus free to subvert a commercial medium for the dissemination of formal experiments to a readership hitherto unaccustomed to such an approach.

At the end of his life Mallarmé reminisced about the literary significance and the personal impact of the autumn of 1874. "I tried," he said, "to write up myself clothing, jewelry, furnishings, even columns on theaters and dinner menus, a journal La dernière mode, whose eight or ten issues still, when I undress them from their dust, help me to dream for a long time" (Correspondence, Vol. 2: Paris: Gallimard, 1965, p. 303). Such remembrance, aided by fashion's mode of existence in modernity as quotations from a past source book, prepared the ground not just for Marcel Proust's literary form, but also for Walter Benjamin's philosophy of history. The view of fashion in Mallarmé's writing, therefore, accounts for the coming hallmarks of modernity itself.