Western theater tradition has its foundations in the Greek celebrations performed in the sixth century B.C.E., honoring Dionysus, the god of wine and revelry. The revels (dances, songs, and choral responses) evolved into spoken drama in 535 B.C.E., when the playwright Thespis introduced an actor to respond to the chorus leader. The result was dialogue.

Another playwright, Aeschylus (525-456 B.C.E.), is credited with establishing what became the traditional costume for Greek tragedy. It consisted of a long, sleeved, patterned tunic, a stylized mask for instant character recognition, and a pair of high-soled shoes called corthunae. All of these garments were exclusively for theatrical use. One cannot act the hero in everyday wear.

Actors in Greek comedies also wore masks to indicate which characters they portrayed. Additionally, they would often add exaggerated body parts, padded bottoms or stomachs, and oversize phalluses to heighten the comic effect. Short tunics, much like those worn by ordinary citizens, were thought appropriate to comedy.

Although the Romans added their own twists, the costume conventions established by the Greeks essentially remained the same until the fall of the Roman Empire, when Western theater virtually disappeared for eight hundred years.

The Middle Ages and the Renaissance

When theater reemerged, it did so, ironically, in the context of the church. The Christian church was the sworn enemy of the drama (perceiving it to be both immodest and akin to devil-worshiping). But, since services were performed in Latin, which fewer and fewer parishioners could understand, priests had to devise a way to dramatize the liturgy.

From the fifth century C.E. forward, mystery plays, dramatizing events in the scriptures, and miracle plays, which depicted the lives of the saints, were increasingly performed both inside the church and on church grounds. As they became more elaborate, they moved into the market square.

Costumes worn in the early religious dramas were ecclesiastical garments. As the scripts became more secular, often involving townspeople in addition to the clergy, lay performers assumed responsibility for any costume pieces not owned by the church. Contemporary religious art provided inspiration for such characters as Daniel, Herod, the Virgin Mary, and assorted devils.

It was during the Renaissance that production elements, both scenery and costume, came to be even more important than the text. Throughout Europe, the nobility staged lavish court masques and pageants to entertain their guests. Costumes depicted gods, animals, and mythological creatures, as well as such emotions as hope and joy. Designers for these festivities included Leonardo da Vinci and Inigo Jones.

Like the Greek comedies (to which commedia is thought to be linked), commedia actors portrayed stock characters identifiable by their masks and by their traditional costumes. Pantaloon, the archetypal doddering old man, was often dressed in the wide trousers that now bear his name. The wily servant Brighella had a coat of horizontal green stripes, the forerunner of nineteenth-century British livery. Other comic characters include Arlecchino, or Harlequin, Il Dottore, a pedantic academic always dressed in black, and Il Capitano, a cowardly Spaniard. The serious characters in commedia, two pair of lovers and a servant girl, wore contemporary clothing.

The works of William Shakespeare, Jean-Baptiste Moliere, and Jean-Antoine Watteau all show evidence of the influence of this important popular art form.

The Sixteenth Through the Eighteenth Century

Costumes for Shakespeare's plays were a mixture of various periods that audiences accepted as the standard convention. Most parts were performed in contemporary dress either owned by the actor (all were men) or provided by the theater's patron. On occasion, a helmet or breastplate might indicate a soldier. Fairies and nymphs might wear classical draperies.

The same principle applies to costume in the seventeenth and eighteen centuries. Most actors and especially actresses dressed as fashionably as possible. A turban indicated an Eastern character. A plumed helmet signified a soldier. Performers provided their own wardrobe with the exception of specialty items provided by the theater.

The Nineteenth and Early Twentieth Centuries 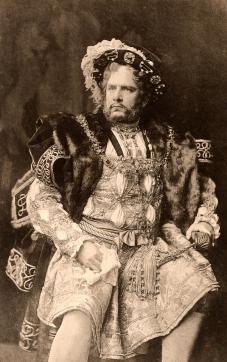 The period between the 1770s and the 1870s saw a drive toward historical accuracy in costume design. As travel became relatively easier, reports, both written and visual, increased people's knowledge of other cultures. International exhibitions such as the Crystal Palace Exhibition in London in 1851 brought the material culture of exotic places to the public. They wanted what they saw and read about to be reflected on the stage.

In the German principality of Saxe-Meiningen, Duke George II established his own theatrical troupe called the Meiningers. The Duke used every available resource to create authentic costumes for his actors.

The Meiningers toured the continent widely, and the style of their productions greatly influenced such bastions of nineteenth century realism as the Théâtre Libre in Paris, and the Moscow Art Theater in Russia. In the United States, the productions of impresario David Belasco reflected his admiration for this new, realistic style.

An inevitable backlash followed. In Russia, to cite just one example, constructivist artists designed highly conceptual costumes whose only relationship to clothing was that they were worn by human beings.

Eventually both styles were recognized as valid, leading to the mixture of historically accurate or concept driven productions that continues in the twenty-first century.

Theatrical costumes are designed to support the script. If realism or historicism is central to the text, the costumes will accurately reflect the clothing appropriate to the period or to the environment. Examples include Henrik Ibsen's The Master Builder, which requires clothing of the early 1890s, or David Storey's The Changing Room, which calls for uniforms and street wear appropriate for a group of rugby players in the North of England.

Other scripts require a more fanciful approach. Shakespeare's The Tempest must be set on an island, but that island can be anywhere in the world. Prospero and Miranda can inhabit any time period agreed upon by the director and the design team.

While film costume often influences fashionable clothing, theatrical costume almost never does. A film is seen by millions of people across the country in the first week of its release. By contrast, the average Broadway theater can accommodate only eight thousand people in the same one-week period.

Moreover, there is typically an interval of a year or more between the end of shooting and the film's release. In this interval fashion magazines and other periodicals can run spreads showcasing the costumes, creating customer demand. Historically, film studios, manufacturers, department stores, and dressmaker pattern companies entered into partnerships to promote both the film and the ready-to-wear (or ready-to-sew) garments which the film inspired.

A classic example is the "Letty Lynton" dress worn by Joan Crawford in the 1932 film of the same name. More than 500,000 copies of Adrian's design were reputedly sold at every price point as soon as the film opened. In 1967, Theodora von Runkle's costumes for Bonnie and Clyde sparked the trend for 1930s revival styles that were so popular in the late 1960s. Ruth Morley's costumes for Diane Keaton produced Annie Hall look-alikes throughout the United States and Europe in the late 1970s.

Another reason why there can be little relationship between theatrical clothing and street wear is scale. A costume is designed to be seen from a distance of thirty or forty feet. Details are exaggerated to make them visible. Film, in contrast, is largely about close-ups. Movie costumes have to be "real" in a way that successful theatrical costumes cannot be.

A few exceptions exist, but they are rare. A red suit designed by Patricia Zipprodt for the 1969 Broadway production of Neil Simon's Plaza Suite was subsequently manufactured for Bergdorf Goodman. In 2002, Bloom-ingdale's introduced a collection of plus-size garments based on William Ivey Long's designs for the musical Hairspray.

The audience for a theatrical event is so small relative to the number of people who attend films that it makes little economic sense to use the theater as a design source. Contemporary clothing for the stage may reflect fashionable dress, but it does not influence it. 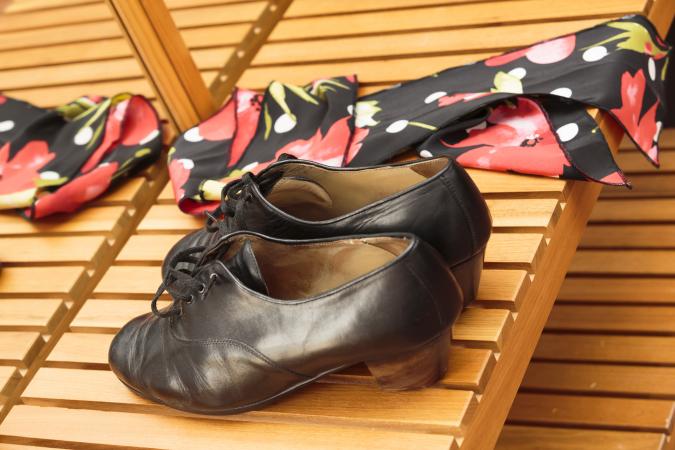 Above everything, a theatrical costume is designed for movement. Armholes are cut higher than they are in mass-produced clothing to permit the actor to raise his arms without the whole garment following. Crotches are cut higher to allow for kicks without splitting a seam.

Costumes must be constructed to be strong enough to withstand eight wearings a week for months or even years, with infrequent cleaning or laundering. If the script calls for a "quick change," meaning that the performer makes a complete change of clothing in under a minute, the costume will be constructed to facilitate the change. To change a shirt quickly, for example, the buttons are sewn on top of the buttonholes. The shirt is held closed by snaps or hook and loop tape so that it can literally be ripped off the performer.

Dancers shoes must have soles thin enough to allow the dancer to flex and point her foot. When custom-made, elk skin is the material of choice.

Theatrical costumes rely heavily on natural fibers (cotton, linen, silk, and wool). Synthetics do not handle or drape like natural fibers. That said, however, the development of new materials has had a tremendous effect on the industry.

Before the late 1950s, for example, dancer's tights were made from elasticized cotton, given to sags and bags, or they were knitted and prone to runs. The invention of Lycra, spandex, and other two-way stretch fabrics eliminated such problems. Braided nylon horsehair can be used to make ruffs that simulate the starched linen originals but which hold their shape when laundered.

No firm manufactures textiles exclusively for use in costumes. The market is far too small. Costumers, however, are extremely creative in discovering theatrical uses for products designed for other purposes. Veri-form, a brand name for a type of thermoplastic sheeting, for example, is an open weave, plastic mesh fabric used by orthopedic surgeons for lightweight casts. It makes excellent armor and masks, is nontoxic and easy to work with.

The plastic netting used to ventilate baseball caps makes indestructible and inexpensive crinolines. Air conditioning and other types of foam can be cut and sculpted to form the understructure of lightweight mascot or other costumes that are taller and broader than the actor inside them. Birdseed, encased in a body suit, is excellent to simulate the movement of sagging breasts.

The most significant development in the field in the last twenty years has undoubtedly been a heightened awareness of health and safety issues. As late as the 1970s both designers and costume makers routinely treated fabrics with highly toxic paints, solvents, and glues with no understanding of the risks involved. In the twenty-first century, not only are less toxic products available, but material safety data sheets, respirators, spray booths, and other protective devices are the norm.

While materials continue to evolve, and styles of costume design go in and out of fashion, the principle remains constant. As Robert Edmond Jones wrote in 1941, "A stage costume is a creation of the theater. Its quality is purely theatrical and taken outside the theater it loses its magic at once. It dies as a plant dies when uprooted" (p. 91).