The trend for "vintage" clothing as fashion exploded in the 1960s. Prior to this, the trading and wearing of old clothing had different connotations. All levels of trade in old clothing were well supported by the increasing speed of fashion change from the fifteenth and sixteenth centuries, and the growth in consumer availability of these trends. As the commercial constituency for fashion increased, the growth in trade of old clothing was incremental as the quantity of these goods increased. The original ragpickers collected items that others had disposed of and returned them back to the economic cycle. Consequently, the ragpicker was allied with other outsiders, or members of the underclass. Karl Marx was later to define the philosophy of artistic bohemianism by its links to this social under-class. Bohemians, he believed, were vagabonds whose position was characterized by economic necessity or (crucially) romantic interpretation. This ambivalence between necessity and choice is essential to an understanding of vintage clothing.

The link between fashion and old clothing made the clothing a definitive indication of one's social status-the line and fabric of a jacket from a period too recent to be fashionable or classic immediately indicated that the wearer was drawn from the lower classes. It was a stigma that people were painfully aware of. The ethos of "makedo-and-mend" allowed the lower classes to position the wearing of old clothing as thrifty and, during wartime, patriotic. However, it was very specifically old clothing that was passed down through families. It was, most certainly, rarely purchased. Consumers of old clothing were, then, considered to be those seeking to give an impression of higher social status, the destitute, or actors, and consequently were treated, in some ways, as suspiciously as those who sold them the garments.

Prior to the mid-1960s old clothing had not been widely positioned within traditional retailing environments, its traders preferring the market stall, auction, or pawnbrokers as a venue for selling. The retailing of old clothing has been viewed in diametrically opposed lights-as a criminal activity for laundering money, as good business practice, and, from the advent of charity shops, as an altruistic pastime. Most cities in the United Kingdom had large warehouses that distributed secondhand clothes, and despite the falloff in trade in the late twentieth century, many still have significant export markets. As trade in old clothing fell, the practice of wearing old clothing rose and became known as "vintage," moving from the market place to the upper market boutique. 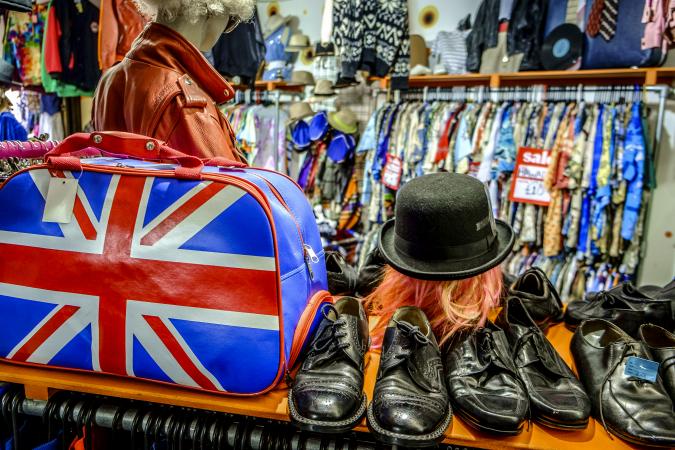 In London, dress has been persistently retailed as vintage since the early 1970s. Shopping guides of the mid-1970s note numerous vintage retailers, some offering in-house tailoring with vintage fabric, predating in practice (although quite possibly not in philosophy) the work of designers such as Martin Margiela, Russell Sage, Alice Temperley and Jessica Ogden. However, it was still not considered a wholly acceptable practice, and the clothing was predominantly worn by consumers affecting a rebellious challenge to the mores and propriety of previous generations.

The duality between thrift and economy on the one hand, and subversive practice on the other, made vintage fertile as a signifier for bohemian morality and practice, notably in the 1950s and 1960s. The hippie lifestyle was positioned as anticonsumerist, which sartorially was communicated through the wearing of old clothes. This interpretation continued throughout the following decades, as seen in the political stance of the Women's Environmental Network in the 1990s, but also in the work of designers such as Helen Storey, Komodo, and to a degree, Vivienne Westwood and the Punk movement.

Trends in the 21st Century

The twenty-first century trend for vintage clothing has its roots more specifically in bohemianism-in the performance of individuality and artistic (rather than aristocratic) elitism. A number of specialist boutique retailers in London have acquired significant profile and status. A number of these (Virginia, Sheila Cook, Steinberg and Tolkein) are regularly credited and quoted in fashion magazines, and a steady flow of celebrities list them in "my favorite store/best-kept secret" questionnaires in Sunday supplements. Across Europe and North America, vintage retailers are no less conspicuous for their domination of fashion headlines. The owners of Resurrection and Mayle (New York) and Decades and Lily (Los Angeles), are considered important "women of fashion" and costumers to the stars. The vintage revival in the United States is due, in no small part, to the eclectic image that stylist and vintage retailer Patricia Fields created for Sarah Jessica Parker's character Carrie in the HBO comedy Sex and the City.

Retailers such as Selfridges, TopShop, and Jigsaw in London, A.P.C. in France, and Barneys and Henri Bendel in New York have all picked up on the trend, incorporating vintage offers or vintage-inspired collections into their ranges. Wearing vintage has become a distinguishing marker of cultural and economic capital-it's unique, it's expensive, and so on-that privileges the individual. More than money, it is free time that is required to invest in the laborious process of seeking, finding, repairing, and selling old clothing. In the latter half of the twentieth century and beyond, that free time was available predominantly to those who were wealthy or who were engaged in work that was flexible-principally, therefore, creative. Because the vintage garment is unique, it also suggests that the wearer is individual, separate from the increasingly and obviously shallow process of fashion.

Interestingly, many Hollywood celebrities have embraced vintage principally because it is outside fashion- suggestive either of anticonsumerist philosophy or of individual choice. Actresses allied with independent cinema such as Chloë Sevigny appear to have adopted the "trash" aesthetic to distinguish themselves from mainstream fashion. Sevigny's protégé designers Imitation of Christ are proponents of an anticorporate philosophy not dissimilar to Westwood's in the early 1970s. On the other hand, Nicole Kidman, one of the most prominent wearers of vintage in contemporary Hollywood, tends to purchase from retailers who position their stock as antique-timeless and culturally valuable-highlighting her sense of personal, individual style, which is supposedly sincere, authentic, and equally as timeless as the clothing she prefers.

One of the most pointed criticisms of vintage is that it is detrimentally nostalgic, particularly in its influence over contemporary design. Alongside the retailers, a cluster of designers have been steadily drawn toward old clothing, either literally, in the reworking of found fabrics or garments, or indirectly, in their plunder of the annals of dress history to create a modernized antiquity for the post-modern consumer. Designers as diverse as Ralph Lauren, John Galliano, Alexander McQueen, Donna Karan, and Miuccia Prada are all known to have invested heavily in vintage clothing to use as resource material. However, it is not necessarily a nostalgic practice since the selection of pieces is informed by the contemporary. Crucially, it is not necessarily the garment itself, but its positioning in a contemporary debate and context that reinvigorates the memories and meanings the garment contains.

Bordieu, Pierre. Distinction: A Social Critique of the Judgement of Taste. London: Routledge and Kegan Paul, 1984.

Tolkein, Tracy. Vintage: The Art of Dressing Up. London: Pavilion, 2000.